We’ve looked at how to find the circumference of the earth, and how far we can see over the horizon. Another kind of question we’ve had about the curvature of the earth is, how much does it curve over a given distance? That has been asked in several different ways, which lead to some intriguing insights.

How high a bulge?

Curvature is technically measured in terms of the angular turn per unit distance, in various ways; as we’ll see throughout this post, trying to measure it in terms of distances only, while it seems to be a natural idea, causes some trouble. But the second question here, about how things change when you double the distance, is just the insight we’ll need at the end.

Here’s what that cross-section looks like (exaggerated as usual) as he’ll set it up in a coordinate system: 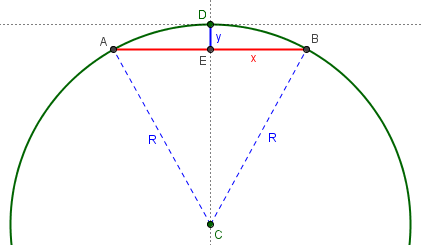 He is using an unconventional trick here; note that he didn’t really solve for y, which is still on both sides of the equation, but that will disappear into an approximation:

Here is a picture showing the new labels: 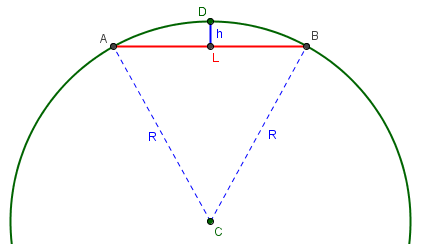 When two points A and B are L units apart (“as the mole digs”, one might say), the straight line joining them is \(h \approx \frac{L^2}{8R}\) below the surface at its midpoint. Keep in mind that this is approximate, applicable only when L (and therefore h) is much less than R.

As we should expect, this is not a very high pile of earth, for distances at this scale; drawings such as ours above have to show huge distances to make the curve even visible.

Relating this bulge to the line of sight we looked at last time, we see that two points 10 miles apart would have to be 16 feet above the water level to (barely) see each other.

We’ll see an exact formula next.

In 2004, a student tried out the formula, not on the earth but on a drawn circle, and his question was added to that page (with wording changed accordingly):

Here is the circle with Martin’s two chords and actual measurements: 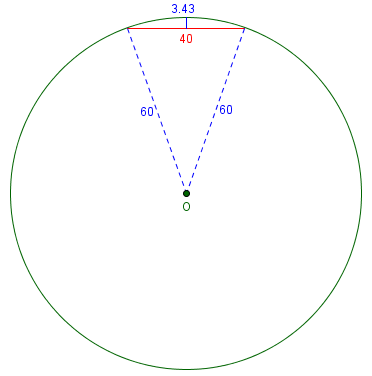 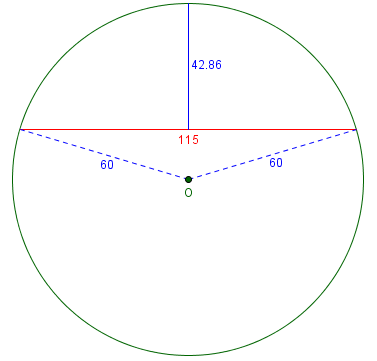 The formula is, in fact, working as advertised. And the approximation is appropriate for human distances on the earth. But what if we want to handle small circles and big chords?

Here are the two solutions: 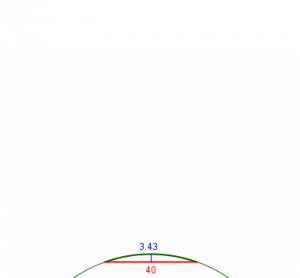 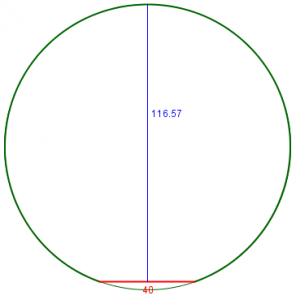 This is an alternative way to obtain the approximation, and is also the source for the estimate of the error, “being approximately of size L^4/R^3”.

How fast a drop-off?

A different perspective was taken by James in 2003, who referred back to that answer:

Doctor Jeremiah had an answer, which is closely tied to our horizon questions from last time:

This is the distance to the horizon from point B, which is 1 unit above the surface.

We’ll connect this to the bulge formula soon!

I want to include an example of a question we got several times, that was never archived. This is from 2009:

That was a pretty good guess; in fact, if you’ve been reading observantly, you will have seen a partial answer very similar to his suggestion.

Here is what I mean: 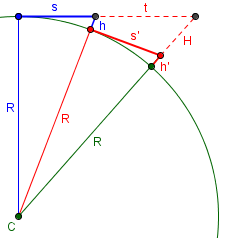 If the drop of the earth over the first mile, h, is 8 inches, then if we dropped to the ground and continued another mile, we would have another drop, h‘, of 8 inches. But that mile would not be in the same direction, nor would the drop at its end. If we actually continued in the same straight line, we would have a considerably longer drop, H. 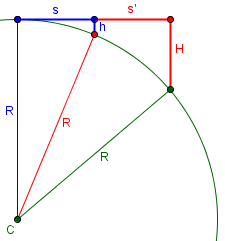 Clearly, the drop is not just twice h. For the much smaller size we are discussing, the difference will not be so great, but it will still be real.

This is about what we found before, but is in a different direction this time, so it is a little more.

Chris responded with a couple other references:

Here is part of the MathCentral page:

There are 2 six foot men. What would the distance be between them before one could not be seen because of the curvature of the earth?

My grandson, who is stationed in Baghdad, Iraq, asked the question. This is one of the fun problems his unit was discussing. Thanks for your time.

This answer was corrected in 2004, by finding each man’s distance to the horizon as about 3 miles, so that the correct answer is about 6 miles, not 18. If we use the approximately quadratic nature of the relationship, we might estimate that the earth will drop 9 times as much in about \(\sqrt{9} = 3\) times as far, so, again, each man walks 3 miles and their total distance is 6 miles.

I replied first to the MathCentral error:

(By the way, Ask Dr. Math has been known to make errors too. We’ve even made a couple minor errors in our current incarnation as The Math Doctors …)

Then, to the apparent discrepancy in our previous answer, which was the first answer in this post:

5 thoughts on “How Much Does the Earth Curve?”