The first is from 1995, and comes from some students who probably aren’t ready for all the mathematical details:

Here is an image from Encyclopaedia Britannica: 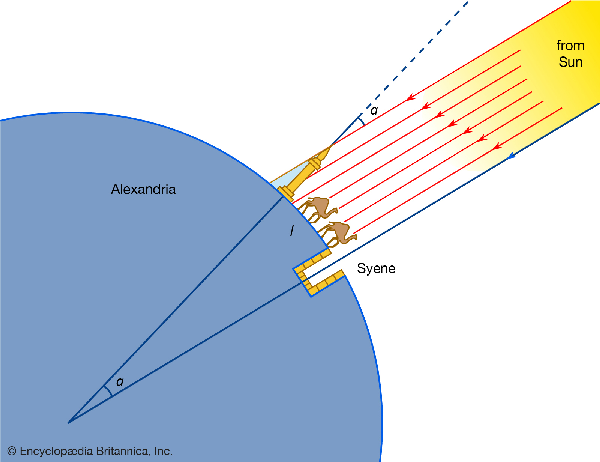 The important thing was that the sun hitting the entire bottom of a (vertical) well gave an accurate indication of a vertical beam of light. This situation will happen on the solstice anywhere on the Tropic of Cancer (the latitude line where the sun reaches farthest north, which was then in the constellation Cancer, the crab), 23.44° north of the Equator.

I mentioned this last time: The calculation is based on the assumption of a spherical earth, rather than in itself proving the latter.

So we have here a list of assumptions and facts, all of which are only approximate. In fact, Syene is not exactly due south of Alexandria, nor is it exactly 5000 stadia south, and it was perhaps not exactly on the Tropic. (Neither longitude nor distances could yet be measured exactly, as we can now.) We don’t even know exactly how long a stadium (or stadion, the Latin or Greek singular form of the unit, also translated as “stade” today to avoid confusion!) was. For more details, see Wikipedia.

The important thing is that these were all close enough to being true, that he could make a reasonable approximation.

This measures angle α in the picture above.

Wikipedia suggests that the change to 252,000 may have been done so that the resulting number would be “round”, in the sense of being divisible by every whole number from 1 to 10, making fractions easy. Unfortunately, we don’t even have Eratosthenes’ own book, just a popularization of it from perhaps hundreds of years later, so we can’t be sure exactly what he did, or why.

Some details for adults

Another question, in 1996, provided the opportunity to go into a little more detail about the geometry:

They are missing the specific fact about Syene’s missing shadow, which makes the work easier. But it isn’t essential, as we’ll see.

Doctor Ethan replied (we hadn’t yet worked out how to include pictures in our answers):

Without mentioning Syene (and supposing details that are completely contrary to fact!), he illustrated the idea:

Observe that in this version, several details would be impossible to determine back then: You couldn’t synchronize the two measurements (since they had neither portable clocks nor instantaneous communication); and it would be very hard to measure accurate distances across the Mediterranean. Since Athens is north of the Tropic of Cancer, the sun is never directly overhead there. Yet the mathematics is identical to the real story.

You can see, by comparison, why the data Eratosthenes actually used was better: The (approximately) north-south line was important as a substitute for synchronization, making noon essentially synchronous in the two places; and the distance over that route was relatively easy to measure. And the discovery that Syene was on the Tropic was a matter of good luck; anywhere between the two Tropics would have been usable, but it would be necessary to determine the appropriate date and time on which to measure.

In fact, their original idea of measuring the shadows of two sticks would work, if synchronization were possible; so today you could just pick two locations far enough apart, and measure the shadows at the same moment. (I have heard of students doing just this.) What you would need to do then would be to use the shadows to calculate the angles of the sun, and work with the difference of those angles much as Eratosthenes did with the single angle at Alexandria. For example, if our two vertical sticks were 500 miles apart, in any direction, then we might find at some moment that one shadow makes an angle of 10.3° from the vertical while the other is 17.5°; the difference of 7.2° would lead to the same calculations we did above: 7.2° is 1/50 of 360°, so our 500 miles is 1/50 of the circumference of the earth, which is therefore \(50\times 500 = 25,000\text{ miles}\): 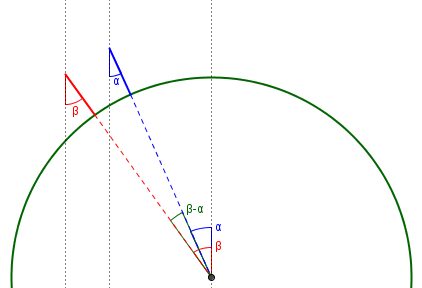 How much was luck?

Nine years later (2005), we got a challenge to the details given in the first answer above, which was added to this page:

That is, we know the angle of elevation of the sun in Syene at noon, 90°; we just need to measure the angle at noon in Alexandria.

This, again, is why Doctor Ethan’s version of the story wouldn’t work back then: Getting the timing right for an east-west measurement would require a good clock, which is what solved the longitude problem.

It is, indeed, considered partly a matter of luck that the measurement was so good; despite the ingenious method, the answer is closer than it deserves to be. Most likely modern tellings tend to choose the length of a stade, and other factors, so as to make the answer as good as possible (though the goal may also be to make the numbers and explanation simple). Wikipedia says that Eratosthenes “estimated that the meridian has a length of 252,000 stadia, with an error on the real value between −2.4% and +0.8% (assuming a value for the stadion between 155 and 160 metres).” Luck or not, that’s pretty good!

1 thought on “Eratosthenes Measures the Earth”