We have been looking at questions about the roundness of the earth, starting with the general fact, and then the determination of the size of the earth. A very common question is about how that roundness affects what we can see, sometimes as a challenge (“If I can see this, then how can the earth be round?”), and much more often out of curiosity (“How far can I see if …?). We’ll look at a few of the latter questions here.

Since the height of the eye above the surface will vary, and the radius of the earth has to be looked up (and will vary depending on how a source interprets it, since the earth is not an exact sphere), it is best to use variables for them. And since we are making a number of assumptions, any answer we give will be approximate.

Here is a picture to illustrate (highly exaggerated so we can see it): 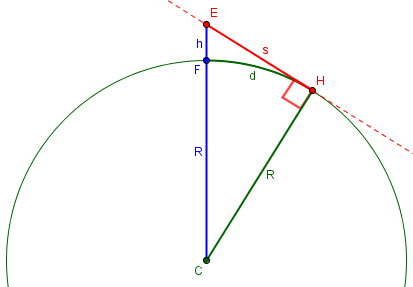 Here, C is the center of the earth, E is your eye, F is your foot, and H is a point on the horizon; s is the straight-line distance to the horizon, d is the walking distance to the horizon, h is your height, and R is the radius of the earth. In the picture h is not very small compared to R; this is a very tall tower! If h were much smaller, you can see that s and d would be essentially the same. We’ll be using that fact.

Now we can apply this to the assumed measurements, being careful to convert everything to the same unit, in this case miles:

You can see now where that assumed height of 5.28 feet came from! It was chosen to produce simple numbers after conversion to miles.

The next question is from 2005, and deals not with the horizon (seeing an object right on the surface), but a tall object beyond the horizon. That is, the first question deals with seeing the waterline of a boat, while this one could be the top of a mast.

Because the light is above the water level, we will be able to see it past the horizon. In fact, the farthest we can see will just graze the horizon, tangent to the earth. So we can use the same thinking here: 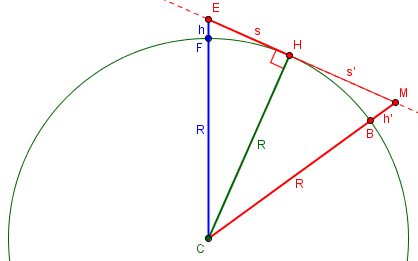 Imagine a straight wire stretched from our eye at height h and the light at height H, and moving H farther away until the wire just touches the earth at our horizon; that is the farthest it can go.

Let’s look at one more question, similar to that last one, from 2001:

This time we won’t be able to use a small-height approximation, will we?

Doctor Ian answered, starting with a simple case where you are on the tower’s horizon:

This is the same triangle we used to find the distance to the horizon. But he’s going to use trigonometry rather than just the Pythagorean theorem, and for a good reason: With such a tall tower, line-of-sight distance is not the same as walking distance!

This is the ratio of “adjacent leg” to “hypotenuse”.

A reality check: the Sears Tower

This refers, of course, to seeing the top of the tower.

Many of the questions we get arguing for a flat earth are based on personal experience or photos of buildings from a great distance. Sometimes their observations appear to depend on a bad memory or atmospheric bending of light, but the main answer for such people is that if the earth were flat, you should be able to see the base of any building from any distance away …

From above the ground

That was the easy case. How much changes if you stand up (or go to the top of a cliff or a building, or whatever)? We know what to do already, don’t we?

This is, of course, the same formula in reverse: the trig version of our horizon formula.

Standing up added about 3 miles – the distance to our horizon.