One of the best ways to get people eager to do something is to tell them it can’t be done. When people who are not well-versed in mathematics learn that it is impossible to trisect an angle with compass and straightedge, they sometimes seem to make it their life goal to “do the impossible”. The result is frequent challenges to that assertion in our FAQ, “Impossible” Geometric Constructions. We’ll look today at several of our attempts to clarify what it means in math to say something is impossible, and to answer those who claim to have done it (people called “trisectors”).

What it is that can’t be done

We’ll start by looking at an early statement of the issue, from 1996:

This is the benign species of trisector, one who just isn’t sure what it is that was proved, and isn’t insisting that everyone else is wrong. Doctor Tom answered, presenting the key ideas one by one:

So what was proved impossible is a specific task using specific methods; if you break the restrictive rule on what tools are available and how they are to be used, trisection is not impossible. For discussions of two such alternative tools, see

(The first of these has a broken link that should now be http://www.faqs.org/faqs/sci-math-faq/trisection/. The second has a link that is now http://www-history.mcs.st-and.ac.uk/history/HistTopics/Trisecting_an_angle.html.)

So how was it proved to be impossible?

One excuse many trisectors give for doubting the proof is that they think algebra can say nothing about geometry. But it can!

As for this teacher’s claimed trisection,

That idea, “I know it’s wrong without needing to see it,” angers a lot of people; but that’s how math works!

The start of an obsession

Here’s another trisection attempt of the relatively benign variety, from 1999: 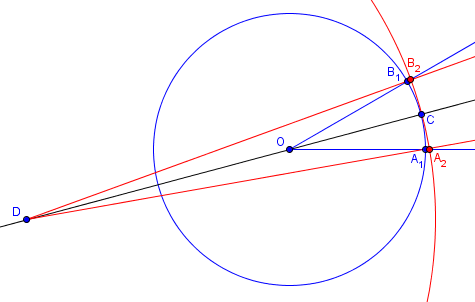 I responded first by noting that the arcs are not, in fact, the same length, and observing that if they were, he would have trisected angle A1OB1:

I tried to encourage him to do math, without the aim of trisecting an angle:

Hollis wrote to us periodically over the following years, sometimes with questions that I answered with comments like, “This looks suspiciously like an attempt to trisect an angle, which of course can’t be done (exactly) with compass and straightedge. Can you tell me what you are doing?” Eventually, he explicitly became a serial trisector, immune to whatever we tried to say.

The burden of proof

Here is a trisection attempt that turned out to be interesting:

Eric clearly doesn’t understand that algebra did prove that trisection (by the rules) is impossible; and that his attempt can’t be called exact until it is proved to be exact — the burden of proof is on him to prove it, not on others to disprove it! But I asked him to show his work, and (in a discussion too long to include here) discovered that it could be made exact if only you could adjust a center point so that other points coincide with a circle. This makes it like a marked-straightedge construction.

Unfortunately, this page got me started on a side career of making similar checks of approximate trisections.

Why your trisection isn’t valid

A 2001 question from Joe provided a perfect opportunity to discuss what people are misunderstanding when they think they have a trisection. It started innocently, as many do:

Note that Joe interprets the claim that it can’t be done as a mere challenge, that no one has yet done it. This is what drives trisection mania.

We have had a number of claims related to specific angles; here is one:

Others start with a known angle, such as Hollis’ 30°, just as an example, but apparently thinking that measuring their result as 10° will constitute proof.

But Joe turned out to be a serious trisector, as he replied:

So he claimed to satisfy the requirements, but something he said suggested the need to add another clarification, so I replied:

Every trisector we have heard from has made a claim without proof, depending only on how things look. (Some, after reading this page, have made attempts at proof, but they generally have no idea what a real proof looks like; otherwise, they would have understood that what is proved impossible really can’t be done.) But no measurements of a physical drawing can be accurate enough; whereas when you do a proof, there is no need to have an accurate drawing.

Unfortunately, the discussion didn’t end here; the next month, Joe wrote back telling us about his constructions, each of which assumed something that is not true about chords and arcs (see below on that). And in 2004 he wrote again:

There, he asked me to analyze his construction on Geometer’s Sketchpad, which I had used on Eric’s construction that I mentioned above; I had to tell him that not only physical measurements, but also calculations (necessarily rounded) by a program do not constitute proof. I did analyze it, to show him that it was not exact, but also demonstrated what a proof looks like, giving a proof of an angle bisection for comparison. At the end, I added, referring to the FAQ:

I have said this sort of thing to several others I have corresponded with. This discussion continued a little further, and ended with his saying, “I will put your note about proof under the glass on my desk as a reminder to leave the trisect impossibility alone.”

But, alas, he wrote again in 2009, with yet another attempt. It turned out not to be close at all. He hadn’t learned a thing.

Let’s look at one more page: a proof that a common assumption of trisectors is false:

I replied to this refreshing question:

The implication I had in mind is that triangle ABE must be isosceles, because triangles ABD and EBD are congruent. It also implies that BD is perpendicular to AC. Since the same must be true of triangle DBC, this triangle can’t exist.

In summary, here is what I wrote to someone who wrote in 2009, starting out “Why do you print false information on your site?”: