As a penultimate post in this series on problems that trigger a lot of doubt or opposition, we’ll look at one that is usually asked just as a “How do you do this?” question, but occasionally gets responses from people who argue for alternative interpretations. Our FAQ is at Three Houses, Three Utilities, which explains that the problem (in its pure form) is impossible to solve, giving two proofs of this fact. Unlike the angle trisection problem we looked at last time, there are not hordes of people claiming to have solved this one, but there are a few, and most of them simply misunderstand the point, taking it as a lateral thinking puzzle.

We can start with our first question about it, from 1995:

Here is a picture (borrowed from the FAQ): 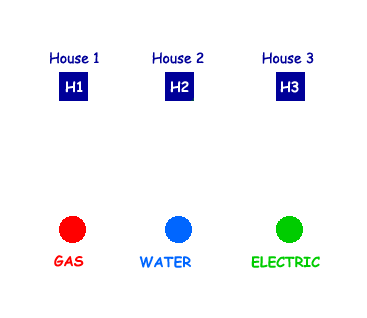 So we have to draw nine (curved) lines, connecting each dot at the bottom to each of the houses. Here is an attempt: 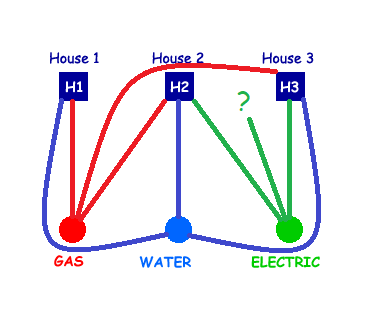 We are missing one line, from Electric to House 1. The line we started is trapped between the green and red lines, one of which it would have to cross to get to the house.

It’s important to keep in mind that this is a pencil-and-paper puzzle, not a real-world problem; real electric lines can go in the air and pipes can be at different levels in the ground, so crossing is not a problem. Also, we are thinking of each square or dot as a single entity, effectively a point, so we can’t pass a pipe through a building as we might in real life; nor can we join wires into a loop from house to house. (All these are things people have written to us to suggest.) We are thinking of it as an abstract problem in graph theory, which deals with points joined by curves.

If you keep trying, you will keep failing the same way, until you should wonder, as Mr. Borstein probably did above, whether you are just missing something, or there is something wrong with the problem itself.

This is the first level of answer: Don’t worry, it’s not just you!

When a mathematician finds that something feels impossible, he has two next thoughts: Can I prove it really is impossible? And, can I modify the conditions to make it possible? Those are the two points Doctor Ken made.

This time Doctor Patrick answered, adding one more piece to his answer:

A piece of paper with a hole in it, when you have permission to go around to the other side both at the hole and at the edges of the paper, is equivalent to a torus. Here is an example solution, where we have fixed the problem in the attempt I showed above by taking that last line through the hole: 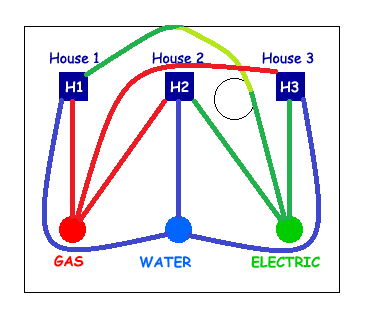 (Here the light green represents a green line on the back of the paper.)

By the way, the hole is necessary, not just the permission to wrap around; without the hole, wrapping around just turns the paper into the equivalent of a sphere, which doesn’t help.

The FAQ shows such a solution on an actual torus. Now, let’s look at one of the proofs that it can’t be done on a plane.+

Doctor Anthony provided not only the answer, but a proof (similar to one of the two proofs in the FAQ):

We previously discussed Euler’s Formula. Commonly we use the letters v, e, and f for the number of vertices, edges, and faces (regions).

Here is an example of a region with four edges: 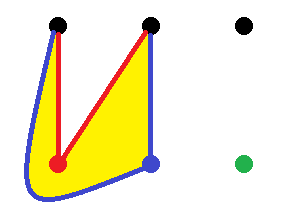 This also provides an explanation for the fact that the puzzle can be solved on a torus: the equivalent of Euler’s formula there is p – q + r = 0, from which we get r = 3, and there is no contradiction.

Asking whether the problem can be solved on other surfaces is interesting math. But many people claim to be able to solve the problem by some “trick”. Here is someone in 1999 who claimed to do it without “tricks”:

Doctor Rob answered with a clarification of the problem:

Such evasions are generally considered tricks. Here is such a “solution”: 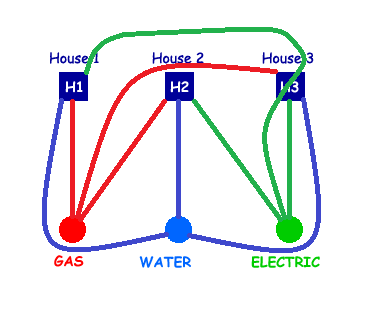 I added a comment, listing the other basic tricks we’ve seen:

But why are the rules what they are? How do we “know” that these tricks aren’t allowed? Because we know the genre of the problem, which is mathematical rather than a riddle. I continued:

So this problem, like some of the others (Boy or Girl? being the best example), is commonly stated as if it were a real-life problem to make it more relevant and impressive, but in doing so it can miss the point, running the risk of making math appear pedantic.

Why not use trick answers?

Here is what another person (Bruce, unarchived) said in 2007 in arguing against our answer, claiming he had a solution:

Henry Dudeney was a popular puzzle creator in the early 20th century, who put this puzzle in its current form, in 1913. (For more information, see Wikipedia.) The notes there lead to this copy of the original puzzle, in Strand Magazine: 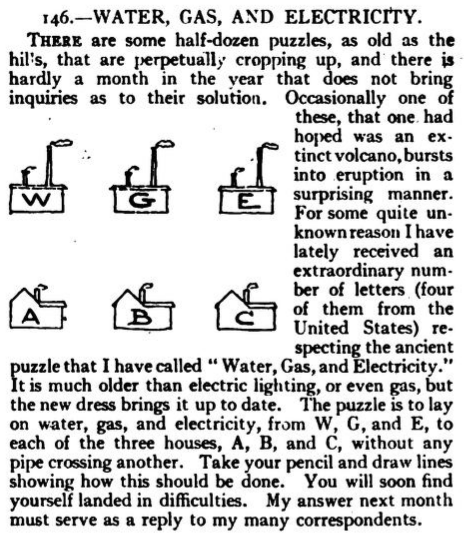 He doesn’t present it in the abstract mathematical form; and in fact, his solution is the same trick answer we’ve seen: 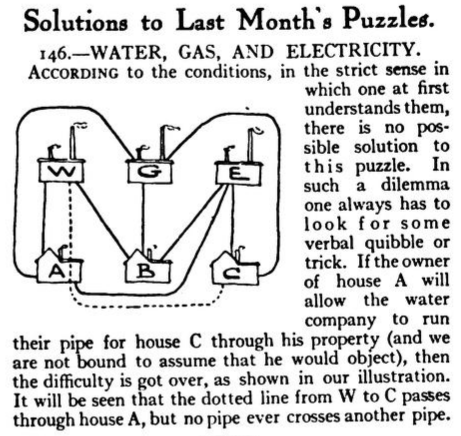 Quite likely, this is also Bruce’s solution. How do we justify disallowing it, when Dudeney accepts it? Doctor Ian responded:

That is, to a mathematician the puzzle is really an opportunity to prove something abstract about points and lines (that is, about graph theory); and this puzzle, in that form, predates Dudeney. Dudeney was interested in puzzles, so in his context the trick is what makes it fun. To each his own!

By the way, someone wrote this in 2005 (unarchived, and in fact unanswered):

The assumption is wrong, of course; but it would be interesting to see the older forms Dudeney referred to. Possibly they didn’t allow his trick.

Why torment me with an unsolvable problem?

Some people write to us having seen the puzzle long ago without, apparently, being told the point (that it can be proved to be impossible) or allowed to use a trick. That can become unintentionally sadistic! Here is one, from Medora in 2003:

But I have to say, it seems inappropriate not to tell students the point! We need an “out” – one of those “open doors”, which might be either a lateral-thinking trick, or a way to prove impossibility.