Last week we looked at the definitions of prime and composite numbers, and saw that 1 is neither. The same is true of 0. What, then, are they? That raises some deep questions that we’ll look at here.

At one level, we could just say that his copy of the “contract” is missing a word or two. As we saw last time, our definition is “a positive number that has exactly two factors, 1 and itself”. That excludes 1.

But we can go much deeper: Why should the definition be written to exclude 1? Why not omit those extra words?

Incidentally, the full wording of this Fundamental Theorem of Arithmetic is “every integer greater than 1 can be represented uniquely as a product of prime numbers, up to the order of the factors“, because rearrangement is allowed, but not changing exponents.

Definitions are what they are in order to be useful; they are crafted to make what we usually want to say as easy as possible. Since 1 would get in the way so often, we exclude it.

In 2002, an anonymous reader asked for clarification on one phrase:

Has the definition changed?

But as the next question, from 2004, reveals, not everyone has always agreed with that definition:

The “Greek reference”  may refer to our FAQ, which refers to the Sieve of Eratosthenes (to be discussed later), which in our version starts by crossing out 1 as not being prime. (If it were called prime, then we would circle it and then cross out all its multiples – that is, every other natural number, so that only 1 would be prime!) That may not, however, be exactly how Eratosthenes saw it. In those times, 1 wasn’t even considered a number! Euclid, for example, calls 1 not a number at all, but a “unit” (not in the sense we’ve used here). So of course 1 was not a prime. 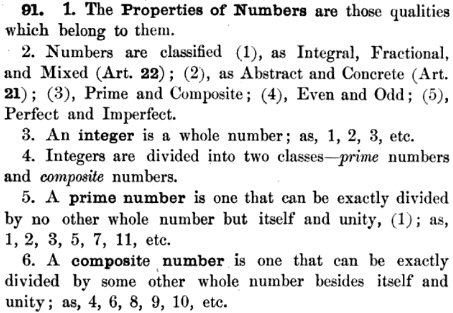 Doctor Rob answered, giving much the same argument as we used before:

A couple days later, I added a different perspective:

So the definition was refined when its unpleasant implications were fully realized.

In the late 1800’s and early 1900’s, mathematics was being clarified in many ways, and this greater care with definitions was part of that development.

What follows is what Conway said; the address above no longer works, so I’m glad I quoted it:

Gaussian integers will be mentioned again, as will units.

Are 0 and 1 prime, composite, … or something else? We’ve seen part of the answer in references to “units”. But there’s a little more to say.

Doctor Rob answered, necessarily expanding the question from “which is it?” to “what (else) is it?”:

Note his slightly different definition of composite numbers, which I like:

At this level, the ideas of units and zero-divisors seem silly because there is only one of each (among natural numbers). We’ll get to that in a moment!

He gives the same reason we’ve seen before:

We’ll close with this 2013 question, which starts with a different issue before moving to primes:

This led to another question:

Where had they seen the term unit? What does it mean to them?

I replied, unsure of the level of their knowledge:

For examples, see Fractions: What Are They, and Why?.

Here I referred to the first answer in this post, and one we’ll see next week, and another I’ve omitted. I think their teacher had told them about one of these pages.

This is similar to the fact that we probably wouldn’t have words like “commutative” if we hadn’t started studying other kinds of “numbers” and their operations.

As an example, if instead of a number line you count around a clock, then \(3\times4=12\) will take you to the same place as 0; so 3 and 4 become zero-divisors.

Most students never get to see that math deals with “numbers” far beyond the natural or real numbers.

Then their teacher (whose email was being used) commented:

That’s what makes it fun to be a Math Doctor!