We’ve looked at the basic idea of primes, then at where 0 and 1 fit in. But what about negative integers? Can they be prime? If so, how does that affect the definition? And can you factorize a negative number if you don’t have negative primes?

Negative numbers are not primes …

We’ll start with this question from 1999:

Edgar’s definition clearly doesn’t allow negative primes – not only because it specifically says so, but also because, for example, \(-5\) would actually have four factors (\(-5,-1,1,5\)), and so would \(5\). (I think Edgar may be confusing the idea of individual factors with factor pairs.)

So the important thing about primes, even before their usefulness, is the universality of facts about them. If a change in definition would result in major exceptions, it would be problematic.

What patterns would negative primes break? Certainly one would be the Fundamental Theorem of Arithmetic, which says that any number can be written uniquely as a product of primes. This would not be true if \(2, 3, -2, -3\) were all primes, because \(6=2\times3=-2\times-3\), for example. So we’d at least have to change how we state the patterns when all integers are in view.

A question from Tom in 2000 led to a different possibility:

This takes the question one step further than Edgar’s: If we just drop the restriction to positive numbers, the definition would allow \(-1\) to be prime (but not 1 or other negative numbers).

I answered first, referring back to that last answer, and adding:

So, there are really two issues: What their definition says, and why the definition should include that restriction. (Our FAQ says essentially what the first answer two weeks ago said.)

So their definition was defective, omitting the restriction to natural numbers (or perhaps taking “number” to mean that).

But then Doctor Floor had something to add:

We’ve heard from Professor Conway last week, and also here. The discussion, no longer accessible at the old address, appears to be now found here; it is in response to a criticism of Conway’s explanation in his book The Sensual (quadratic) Form, where he says in the preface, 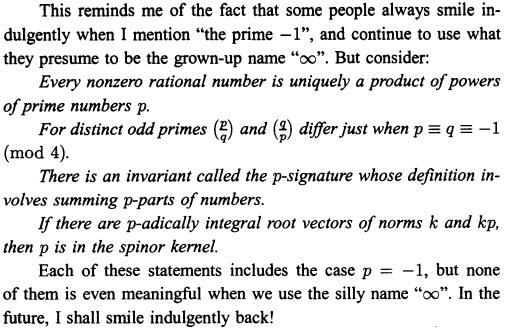 (Don’t ask me why someone would call infinity a prime within this specialized field.)

His first actual use of this convention is on page 95:

(Take a moment to ponder how different this is from the standard usage.)

Here is what he says in the discussion, responding to a complaint about the first quote:

> he gives a list of four example statements that he claims are stated most concisely if -1 is considered to be a prime. his first example is “every nonzero rational number is uniquely a product of powers of prime numbers p“; apparently he’s too stupid to realize that -6 is both 2*3*(-1) and  2*3*(-1)*(-1)*(-1).

I worded that statement more carefully than you’ve read it.

[L]et me say that I’m very puzzled indeed as to why my calling -1 a prime so enrages you. I did so for a very real reason, not just for fun. Namely, the theory of quadratic forms largely consists of statements – let me call the typical one “Statement(p)” – that are usually only asserted for the positive primes p = 2,3,5,… . Now in my experience, in almost every case when Statement(p) is true for all positive primes, it’s automatically both meaningful and true for p = -1 too, and moreover, that additional assertion is just as useful.

Of course, it’s also the case that -1 does behave differently to the positive primes, but the way this happens is usually that MORE is true when p = -1, not LESS. If LESS were true, then it would indeed be silly to count -1 as a prime, but since it’s almost always MORE, it’s silly not to.

Let me discuss the simplest such statements in this light.

First, the form of the statement of unique factorization that I prefer is:

The multiplicative group of the non-zero rationals is the direct product of the cyclic subgroups generated by “my” primes, namely -1,2,3,5,… .

The additional thing that’s true here is that the subgroup generated by -1 has order 2.

Of course you can still state this with “your” primes, but then have to say “generated by -1 and the primes”, which makes it just a little bit longer.

My point is that this a priori silly idea is actually so sensible a posteriori that inside quadratic form theory it’s well worth while changing the accepted convention. But of course you don’t have to – by all means use the longer statements if you prefer them.

This illustrates the fact that we can modify a definition when it makes things easier in a particular field. Definitions are tools of mathematicians, not their masters; and Conway was known as a particularly creative mathematician. He is not proposing that this redefinition be used everywhere.

… or we can extend the definition

A 1997 question from “Muskrat” broadens the context even further:

Yes, his definition has to be improved; it is missing some things.

This is one missing detail in Muskrat’s understanding: 1 does not have 0.5 as a factor (divisor), because divisors must be integers.

So the natural numbers split into these three sets: units, primes, and composite numbers.

This covers everything we discussed in the last two weeks.

Now, we can move beyond that:

So if we choose to work with integers, we have to change the definitions, so that a prime has exactly four divisors, rather than two (and a unit has exactly two). This way, we can talk about negative prime numbers – because we are now living fully in the world of integers, not just using old definitions in a new context.

So we’ve also changed the theorem to apply in this bigger world. (We could instead restate this using both positive and negative primes.)

But did you notice that Conway mentioned rational numbers in his version of the FTA? There may be a way to do this, after all. But it, too, will require changes.

Do negative numbers have a prime factorization?

If there are no negative primes, how can you factor a negative number as a product of primes? This is another context issue.

That is, in calling the factorization unique, we ignore any 1’s or -1’s that might be inserted.

As we’ve said, the idea of primes originated in a world that didn’t know about negative numbers, so there was no issue. If we choose to expand our world to the integers, we just have to make this little addition.

But we can expand still further, as we also touched on last week:

This is left for the reader to explore!

The answer they read may have been Are Negatives Factors of Other Numbers?, from a few months earlier, which was about a somewhat different issue; the answer there was that the meaning of “factor” depends on context, and that for a certain question on a standardized exam, negative factors would probably not be in view.