We’ve looked at what prime numbers are, and how the concept extends (or doesn’t) to 0, 1, and negative integers. The next question many students have is, how can I make a list of prime numbers (or write a computer program to do so)? We’ll learn about the Sieve of Eratosthenes, and list all the prime numbers up to 1000.

We’ll start with this question from 2008:

But what if you don’t have such a list? That’s where Brooke wants help.

What we’ll be doing here is not the most efficient way, but is intended to help Brooke gain an understanding of primes and divisibility tests, not only for making a list but also for checking if an individual number is a prime. (Next week, we’ll look at efficient ways to do the latter.)

Doctor Rick’s suggestion is to check each number individually, using the tests he’ll list; I’ll do it to all the numbers in parallel, to save writing, which will lead up to the fast method we’re heading toward. 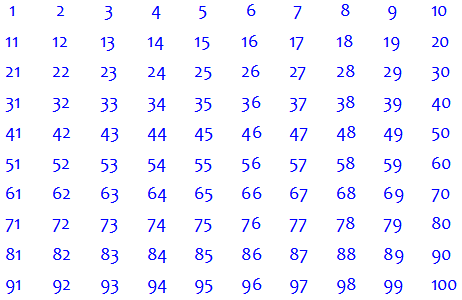 We’ll see below (and also next week, a different way) why we can stop at the square root.

Here I’ve crossed out all the even numbers (red) and remaining multiples of 5 (green), and erased 1, which is neither prime nor composite: 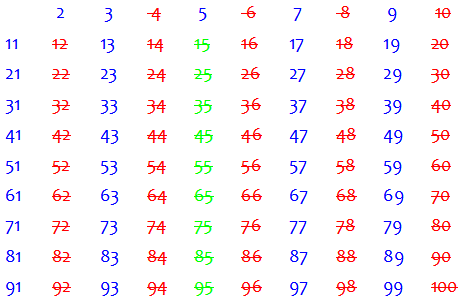 These divisibility tests are particularly easy, because our base, 10, is a multiple of both. That also makes this easy to represent in a table with rows of 10!

Here I’ve erased what I crossed out before, and crossed off all remaining multiples of 3 (red) and of 7 (green): 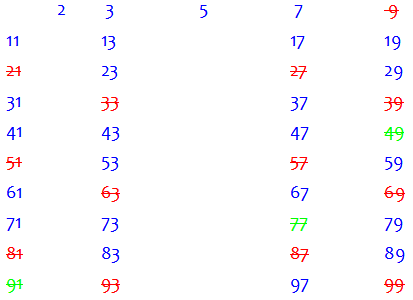 These tests are considerably harder than for 2 and 5; the method we’ll see next eliminates that difficulty.

Here is our final result: 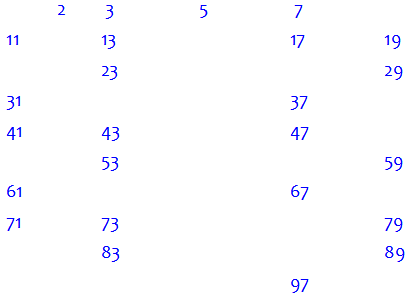 The Sieve of Eratosthenes: a game of elimination

Here’s a question from 2002 about a far more efficient method:

A sieve, in real life, is a device with a screen, or many holes, that can let small particles pass through, while holding back large particles or clumps. 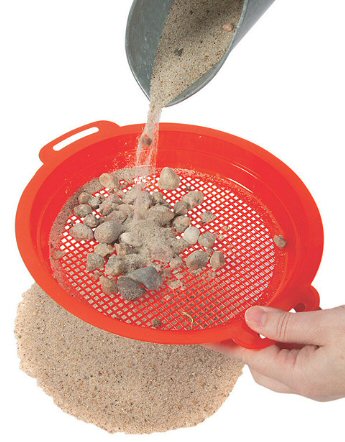 This metaphorical sieve is an idea attributed to the ancient Greek mathematician Eratosthenes. Here, the “large particles” it removes are the composite numbers, which are “clumps of primes”. Prime numbers are like grains of sand, or like atoms, from which molecules are made.

Although in typing he chose to erase the multiples, the work is easier if you circle the prime and cross off its multiples as he said, leaving them in place:

In this case, we just cross off every second number – no multiplication or division is needed. The same will be true for larger primes as we proceed.

Here we cross off every third number (half of which have already been crossed off, because they are even); I crossed in a different direction this time just to make them stand out – you don’t have to distinguish this when you do it:

Again, I just had to “count by threes”, and never had to multiply or divide.

As we proceed, all the multiples of any composite number will already have been crossed off when we come to it, so we just skip it. We only check divisibility by primes, which we discover as we go.

The only new number we cross off is 25:

There are no multiples of 7 remaining (we’ll see why below), so we can stop.

In our sieve, we started with the most frequent multiples, and each subsequent prime has fewer.

Where to start, where to stop – and why

Now let’s look at that square root idea that was mentioned before. Here’s a question from 2012:

I have more than once encouraged a student to try something I knew would not work, so they could discover for themselves (and hopefully remember) why it wasn’t necessary.

I chose to use an intermediate-sized example:

Here, rather than erasing numbers, I showed only the crossings, in order to keep the places, which help in finding multiples by counting.

Here is the key:

This gives us our first shortcut: Don’t start counting multiples at the prime itself; start at its square.

It also tells us when we can stop:

You don’t need to have calculated the square root ahead of time; in doing the sieve, you will be squaring each prime to find the first multiple, and when the square is past the end, you stop. That’s our second shortcut.

Here’s a summary of the method, at its most efficient:

Sieving for primes through 1000

So let’s close with that sieve for 1000. Each time I mark a prime (with a new background color), I’ll cross out its remaining multiples using that color: 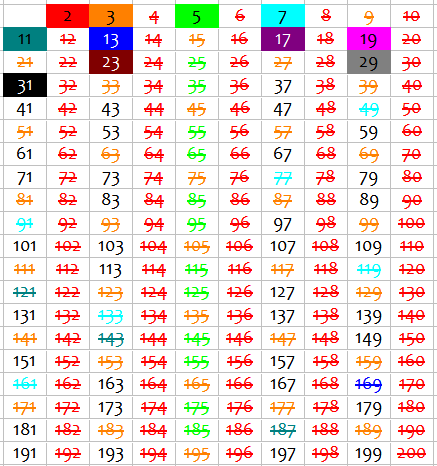 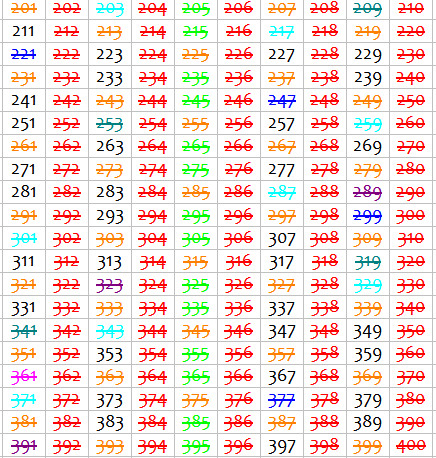 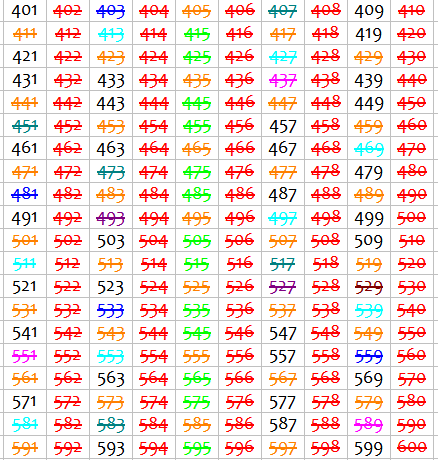 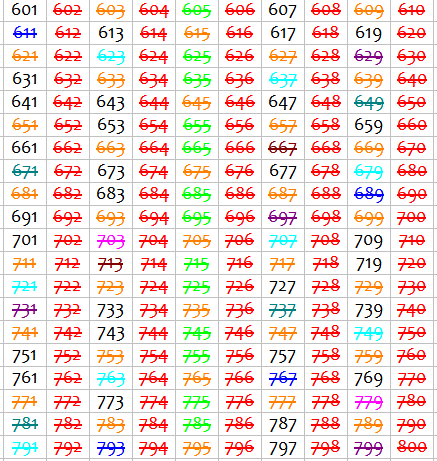 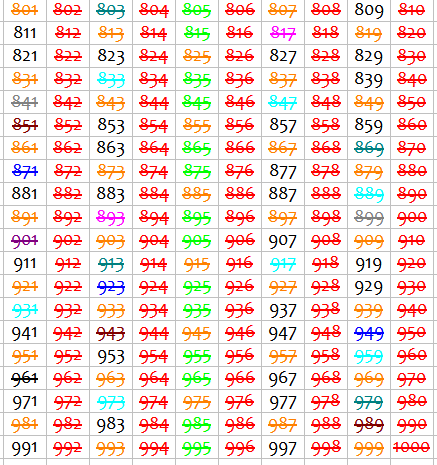 Everything not crossed off is a prime.

Once I had marked 31 as prime, since its square is 961, only that one multiple had to be crossed out (992 being already eliminated), and all remaining unmarked numbers are prime. (All this was done by conditional formatting in a spreadsheet – I didn’t really do all that work by hand!)

It is entirely accidental (honest!) that this post, for Christmas, is about Making a List, and will be followed by Checking Them (twice). Santa Claus is coming to town!