When I heard Thursday that the great mathematician John Conway had died (see the New York Times obituary here), I recalled not only his books I have read, but his involvement in Ask Dr. Math‘s early days. In addition to a couple dozen quotes from him, there were several questions in the very beginning of the service that he answered directly, probably through his heavy involvement in online math discussion groups. I want to look at one of his contributions that particularly demonstrates the kind of teacher he was (and his sense of humor).

If you bog down in the specific problem in view, skip to the last half of this post for his ideas on thinking and on teaching for understanding. That is the part I consider most interesting; but as the last half is comments on how he came up with his answer off the cuff, I can’t just skip to that without losing essential information.

This question came on what I believe was the very first day of the service (November 1, 1994), and brought in not one but two professors to discuss it. I’m going to skip over others’ contributions (it was a long discussion that is too big for a normal post even now) and focus on Doctor Conway’s. Here is the question:

Wiggles on graphs, and complex roots

Here are their graphs, with red dots at the points of interest: 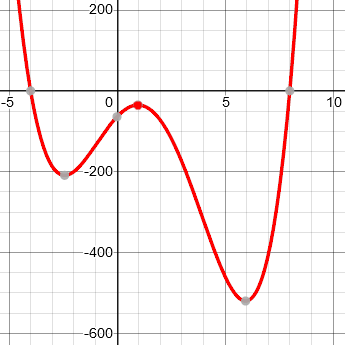 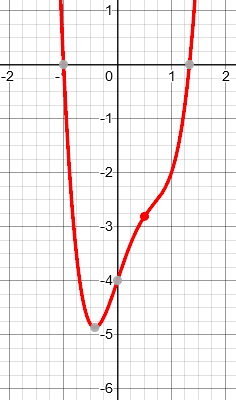 In a couple days professor Stephen Maurer of Swarthmore College (then the host of the Math Forum and Ask Dr. Math) joined in with some thoughts; then on the 6th Prof. Conway wrote (dealing only with cases like the first). In passing this on (because of course he wouldn’t have been registered as a regular Math Doctor), Steve Weimar, who headed our service, prefixed it with this:

Conway started by answering the wrong question (which can be illuminating):

(Below, he will be commenting on how he wrote this, explaining that it is more or less stream-of-consciousness, written as he thought; I won’t make as many comments of my own as I usually do.)

This gives the complex roots, if you know the leading coefficient k. (We’ll be correcting a small error here; he’s human! If he had explained his thinking, he might have pointed out that when a function is multiplied by k, that multiplies every y coordinate by k, including b; so that the “b” in the original function to which the theorem applies is actually b/k as we measure it on the graph. Therefore, the roots are \(a\pm\sqrt{\frac{b}{k}}\).)

Here is a better illustration: 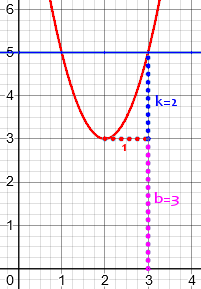 Note that he has expressed this in terms of behavior near zero, knowing that is sufficient as the function can be translated into that position without changing the quantities he’ll be looking at. 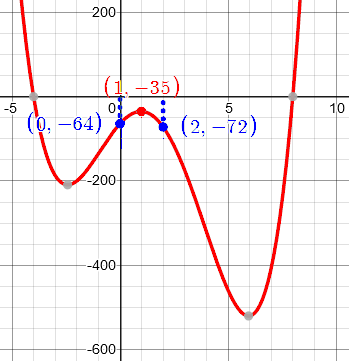 Notice that Conway’s ideas don’t apply to the second example, with a mere wiggle. That case was discussed by the others in the thread. Given that we have a turning point to look at at all, he next considered how far from it you can do his measurements:

Let’s try it on our example. … 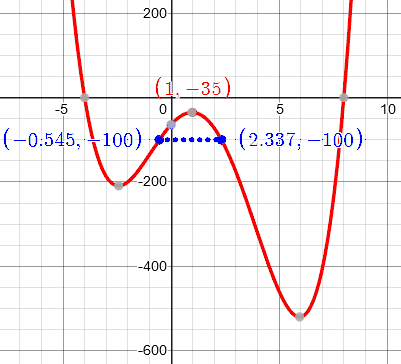 We can see here that Conway has been giving, not a complete answer, but suggestions about how to approach the problem, starting with a simple case and looking ahead toward a potential full answer. That is really what is most important in helping these students!

Thinking through his thinking

Shortly after his initial response (perhaps in response to thanks from the class), Conway discussed how he wrote his answer, moving from intuition to specifics:

Real mathematics requires delving into details; but creativity starts with intuitions. How does one develop, and then pursue, such intuitions?

This is an example of a plausibility check, to focus one’s efforts.

This visual intuition comes from familiarity with quadratic functions, which starts with what I call “play”, just as children become familiar with the physical world through play.

A standard concept in problem solving (cf. Polya) is “try a simple case”. Here, the goal is an approximation, but understanding of that can be rooted in an exact solution.

This intuition encapsulates the idea of Taylor polynomials.

A deep knowledge of approximations includes knowing the importance of the magnitude of errors.

Once you’ve answered the basic questions, you can always map out possible future analyses.

How to teach mathematical intuition

Now he turns from teaching to giving advice about teaching, which to me is the most valuable part of Conway’s comments.

How do you learn to understand beyond mere formulas? How do you help someone else do so? That is our real goal.

I love that Conway can communicate clearly at any level; I, too, have found that teaching skills that work best for adults also work well for children.

Something visual gives us a place to hang abstract ideas that can’t be pictured. Even in grad school, I recall being impressed that the right picture let me think coherently about infinite-dimensional spaces, which in themselves can’t possibly be pictured!

Multiple examples are like looking at the same object from different perspectives, just like a child turning a block in different directions and trying different movements with it. Real understanding can’t come from only one direction!

When you have learned what makes the most difference, you can ignore inconsequential details (for the time being) and focus on what matters most. This is an important aspect of intuition, often thought of as “number sense” in children.

Connecting a new concept to familiar concepts helps make the new ones familiar, too.

This last idea of using the student’s own ideas, leads to a wonderful twist:

The place of fakery in teaching

If you forget everything else here as a teacher, let this remain with you:

I’ve read this piece many times, and I am always caught off guard by the joke.

But the principle is one I use heavily: When I teach or tutor, I want to make my interest in both the subject and the student tangible; a good “deskside manner” is essential. Sometimes that takes a little deliberate effort.

Find what the student has done well, and make that visible! When they think like a mathematician, even just a little, we need to make them feel successful, so they’ll want to do it again. And when an idea came from them, even only partly, it belongs to them.

This correlates to our desire as Math Doctors to let a student do the work, so we can start where they are, and show how much can be accomplished using the insights they already have. We encourage them to try something, even if it will not work out, because just getting moving can take you to a place of further insight.

The discussion continued with further ideas about graphs of polynomials; but the comments on teaching by Prof. Conway were well worth the price of admission.

He will be missed.