It can be an interesting challenge to be presented with a formula and asked how it was derived. This becomes a bigger challenge when the formula is only approximate, so we have to figure out how to arrive at this particular approximation. But it is impressive when several different approaches all naturally lead to the same approximation! We’ll bring in geometry, algebra, trigonometry, and some results from calculus to attack this puzzle.

This question came in last month, from Cvetača:

I have an equation as shown in the picture. That equation is an approximation of the distance from a chord to an arc. My question is, how is that equation derived? I have no idea how to explain it.

Here we have a chord of a circle, divided into two parts, m and n; the only other thing we know is the radius R of the circle. We want to find a formula for the perpendicular distance to the arc.

An exact formula would be considerably more complicated than the formula shown, \(\displaystyle p \approx \frac{mn}{2R}\). Where did this simple formula come from? And can we derive an exact formula for comparison? Finally, what is the significance of the markings for the two arcs in the picture? Do they suggest a particular derivation?

After pondering the form of the formula, I saw one way to obtain it, by a favorite geometry theorem:

I’d be interested to know where it came from, and what was said about it. But I have a guess.

The formula implies that mn = 2Rp. This is reminiscent of the intersecting chord theorem, which says that mn = pq, where q would be the distance on segment p extended downward, until it intersects the circle. 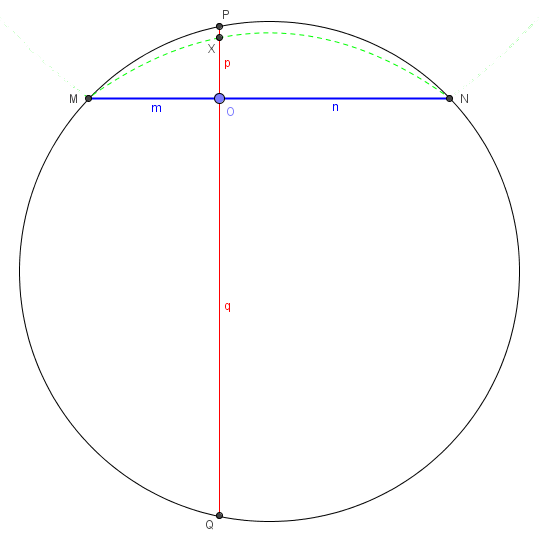 Therefore, the approximation assumes that q is nearly the diameter of the circle, i.e. the arc is small compared to the circle. In the image, I have shown the locus of the point X located by your formula, showing that it is close to the actual arc, but always smaller; if I move chord MN lower, it becomes considerably farther from the arc, but if I move it upward, the approximation improves considerably.

Now, the approximation may well have been derived differently, but this seems to be a particularly simple way to explain it. Others of us may well have additional ideas.

So one way to derive the formula is to assume that the arc is a sufficiently small part of the circle that we can ignore the difference between my q and the diameter. This might have been motivated by the theorem I referred to. But most approximations arise by other means.

Though Cvetača had no further comment, and no other Math Doctors made suggestions, I remained curious, and have subsequently played with the problem more, discovering several interesting approaches.

First, let’s try applying the Pythagorean Theorem to the problem, solving for p algebraically and making an approximation by ignoring small terms at some point. 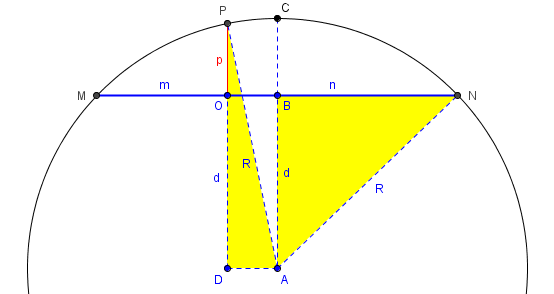 As successful as we have been so far, we haven’t used the notations on the original picture showing the arc lengths as approximating the parts of the chord (which is not true in my picture, but would be for a sufficiently shallow arc). Surely they must be part of the original derivation. So let’s try focusing on those arcs and their corresponding angles. 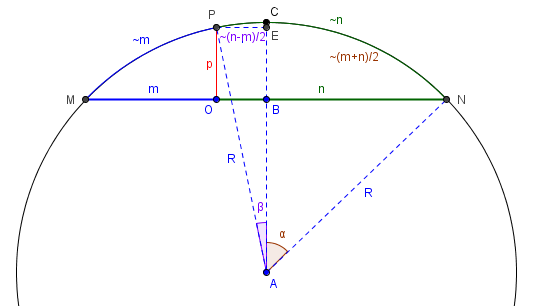 So now we have four ways to derive the formula. I imagine the last one, or something like it, is most likely the original.

We have received dozens of questions like the following, looking for the same result with different “givens”:

The difference from the current question lies in what is known. Here, we know the radius r, the height h of the entire circular segment (from the chord to the middle of the arc), and the distance x from the center of the chord. The latter is closely related to our m and n, but above we didn’t know the height, which is what made it harder.

Here is a picture:

Doctor Rick answered this one:

Carl asked another question, and later told us he was regularly using this formula in his work.

Many others who have asked about the same calculation don’t know the radius, but only the height and the length of the chord. We have referred them to this page (or others like it):

Here is my answer:

Deriving our formula from these

In our case, though, we know the radius and the chord length, but not the height; we can solve this formula for h, which requires the quadratic formula:

The two values this gives are for the major and minor arcs; we can choose the negative sign since we will only be interested in the minor arc.