Can we prove it using math?

I’ll start with this direct question, from 1996:

Nathan recalls learning how to calculate the circumference of the earth (and also that you can find your location by angles to the stars, which implies roundness); he seems to be primarily looking for that, but the philosophical question is deeper. I wouldn’t be too surprised if the would-be philosopher was just engaging in some epistemological experimentation, and wasn’t quite serious, but you never know.

Doctor Ceeks didn’t exactly take the side of the philosophy major, but came close:

Mathematics studies abstract systems such as geometry, involving idealized points, lines, etc. (which have no width, are perfectly straight, and so on). It answers questions about the real world only after we model some aspect of the world in mathematical terms. We can, for instance, assume that the world is (approximately) a sphere, and do some calculations based on real-world data; but the calculations can’t prove the assumptions. (We’ll be seeing later how data can support the claim that the earth is round, and can contradict the claim that the earth is flat, but proof is a stronger claim than that, and mathematicians are concerned to preserve the proper meaning of “proof”!

So the round earth view is more useful, because it makes many predictions that fit our experience of the world (despite being contrary to our first impressions); but that is science, not mathematics.

This is one of the foundations of science: A model that explains more data is considered more valid, but any model may later be supplanted by one that explains even more. Science can’t prove anything absolutely (as mathematics can, because it only makes claims about abstract things within its own world), but it can provide support for hypotheses.

This punch line is more significant than you might initially think. What he is saying is that the earth is not exactly flat, nor exactly spherical, because neither model would have places where you can walk uphill. The flat earth and spherical earth hypotheses are not exact, mathematical claims, but general descriptions of the nature of the earth at a large scale. (Of course, “round” doesn’t actually mean spherical, just “not flat”, or at least “more or less spherical”.) To prove something true, you have to first define the claim clearly!

This answer was not fully satisfying, because there’s a lot more to be said.

We got a similar question, from the opposite direction, in 1999:

This detailed assignment assumes the roundness of the earth can be proved mathematically. Can it?

I answered, initially along the same lines as Doctor Ceeks:

Maria didn’t say whether her answer to “the other half” (the history) dealt with Eratosthenes’ measurement of the earth, or someone else. We’ll be looking at that story in detail next time.

But does that calculation actually prove the earth is round? Not really!

I’ll be carrying out my suggestion at the end of this post.

These are scientific observations that don’t really need math. For example, here is what you see in a lunar eclipse: 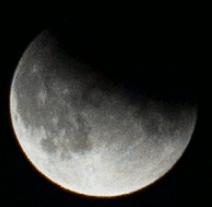 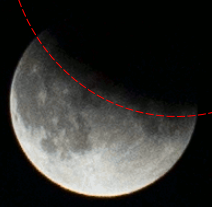 That “bite” is the shadow cast on the moon by a larger sphere, the earth. It is not what you see normally, just because the moon itself is round. In effect, what we see here is a selfie of the earth (in silhouette).

As for the ships … we’ll be looking at horizon calculations next week.

Maria would have to do what was expected, namely to explore the calculation of the size of the earth; but she might add the insights I’m suggesting for extra credit. We’ll see next time the explanations of Eratosthenes’ method that I referred her to; I added some helps she might need to understand the basic geometry:

What if Eratosthenes were a flat-earther?

Now here’s what I left her to try herself: Suppose we assume a flat earth. We’d draw this picture:

That’s essentially what we got for the radius of the earth! That’s the “interesting relation” I mentioned.

Now, if you gathered additional data from different locations, you’d start finding inconsistencies with this model; at the extreme, if you could go 6000 or so miles to the north (to the north pole), you’d find that on the same day, angle A is 90°, and H would become 0.

But the flat earth model was known to be wrong long before anyone traveled that far.

Next time we’ll look into the details of what Eratosthenes actually did.

2 thoughts on “Proving the Earth is Round … or Not”