We’ll be looking at various aspects of place value, starting here with the basic concepts. As soon as you learn to write numbers beyond 10, you have to start understanding this concept; so we have to begin at a concrete level and move gradually to something more abstract.

Our first question comes from a mother in 2007:

So, what does it mean to talk about tens, and how can we make it meaningful to young children?

I answered by referring to my own experience with my homeschooled kids, since I am not an elementary teacher:

Here is my representation of 137 beans:

The nice thing here is that, unlike some other representations, we are simultaneously representing the numeral “137”, and showing 137 individual beans!

There are also manipulatives you can buy (base ten blocks) that represent different numbers of little cubes (“units”), rows of ten (“rods” or “longs”), and squares of a hundred (“flats”), and even big cubes of a thousand (“cubes” or “blocks”): 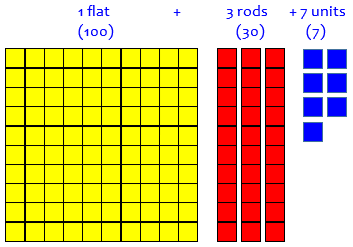 These are only slightly less “real”, because they are stuck together, not made of separate bits.

Now we don’t actually have 137 dollar bills in front of us, but something that represents it: 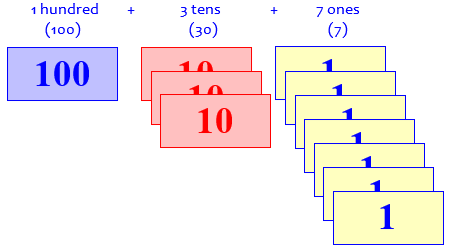 The restriction to no more than 9 per place is just a matter of using as few bills as possible.

(By the way, to introduce base 5 numerals, you can use pennies, nickels, and quarters.)

On the right is what I described, actually used for keeping track of money; on the left is a hand tally counter you can still get:

The physical action can make the idea of counting, especially moving from 9 to 0 and “carrying” to the next digit, more concrete, even though the representation is now entirely abstract.

A 2002 question touched on that very thing: Why can’t a digit be more than 9?

We want to give every number a unique name, so we don’t need a symbol (like “X”) for ten, because “10” handles it. The counter might be a particularly good way to illustrate this.

The fun part is that we can actually understand what this would mean, even though we don’t use it!

It is not only children who need help understanding all this; adults can be helped by concrete explanations as well as abstract considerations. For this question, from 2000, I used the former:

It wasn’t quite clear how Enzo was thinking. I answered by first relating place value to units of measure:

This is much like those 7 leftover beans that were not in a cup (not part of the tens).

I next, in effect, used base ten blocks to illustrate, but expressing it more like cups and trays, counting individual objects:

Here, starting from the given number 589, I counted in decreasing sizes, using up digits from left to right, resulting in the static image of the final result. This is the opposite of the process of counting, which he used in his own example, so I described that more fully:

The odometer, again, is a mechanical representation of the result, but considerably more abstract.

Next, we’ll move on to what might be considered that deeper, abstract level, looking at a written number and seeing what it means without counting anything.

Breaking a number down

This is called expanded notation, and is another way to say “2 thousands, 0 hundreds, 3 tens, and 4  units”. But now it’s become an abstract process of writing a sum of multiples of powers of ten.

This 2003 question is from another 12-year-old, who would be ready for a bigger picture, even though the question in itself doesn’t require it.

The quick answer would be, “You’re right and the book is wrong.” But that begs the question, “How do you know you’re right?” Doctor Ian answered:

Those are the place values, in order (which is why he started at the right). The fifth, fourth, third, second, and first places from the right are, respectively, the

places. To handle big numbers, he introduced the idea of exponents, in case Kelly wasn’t familiar with them, and then continued:

To put it a little differently, to find the place value of the 6, you can write down a 1 (for the 6 itself) and a 0 for each digit following it, and we get 10000, which is the place value, ten thousand:

Here’s a question from 1997 asking the same question in reverse:

Notes on terminology: What is place value?

I want to add one more answer here, from 2003, that was not put in the archive for publication:

I replied, sort of agreeing:

If the three terms listed there were standard, I could live with that. But even in talking to that other student, I struggled a bit with the fact that the “face value” of money is the number on the bill, which is not 7 but 700! Any terms you use are arbitrary, and therefore not really meaningful without general agreement.

I have generally had the sense that math educators are far less careful about definitions, and about general agreement, than mathematicians! And it’s in that sense (as a term used by mathematicians in particular) that the “place value” of a digit does not exist.