Last time we looked at the concept of place value as children first learn it, with whole numbers. Here, we’ll expand that to look at decimals.

What do we mean by decimal?

First, we need to deal with what the word means, because it is used ambiguously. Here is a question from 2004:

The specific question seems to be whether anything with a decimal point in it is a decimal, but it called for a little more. I answered:

So the “decimal number system” is our base-ten positional system in general. The emphasis of the word itself is on the base. A decimal numeral is one written using base ten.

So a “decimal” in this sense is a non-whole number written in decimal form, which requires a decimal point. (“Fraction” is also used in different ways; here I am not requiring it to be less than one, as we sometimes do.)

This addresses Michael’s main issue. The number 6.5 is a decimal, though we call .5 specifically its decimal part. It’s much better to call it the fractional part, but we tend to think of “fraction” as referring to a number written as a fraction, like \(\frac{1}{2}\).

This is why using decimals to refer to non-whole numbers is a pet peeve: It makes it impossible to talk about the corresponding concept in non-decimal bases. In other bases, we call the point the “radix point”, and the part after it the “fractional part”. But that just extends the error, as “radix” means “base”! “Fractional separator” is better.

Since I am not an authority on word usage (either in math or in daily life), I didn’t stop there:

Like last time, we can get started on the concept itself with a letter from a mother in 2003:

But since the goal is understanding, he presents the idea of place value as he did last time for whole numbers:

Now we need to think about what those group sizes mean.

This is “expanded exponential form”, which we touched on last time. The zero represents an “empty” group of hundreds, and is needed as a “filler”, so that the other digits have the right place value.

The goal is to separate the whole part from the fraction part.

That’s how we handled whole numbers last time. The decimal places are a little harder:

Note that you count all the way to the end, and that gives you the number of zeros in the denominator. You don’t just count the zeros.

Is there a “oneths” place?

Continuing a thought from that answer, we’d previously had this fun question from 1998:

This is a favorite of mine, because from time to time we’d get questions about “oneths” (at least a couple dozen), and I was able to point out that the question was not so unusual – if they searched our archives for that non-word, they’d find it!

We tend to expect places to match up this way, but they don’t: 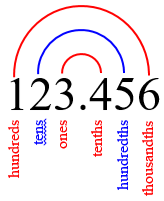 The ones stand alone.

In fact, something like that underline idea has been used! One early attempt at writing decimals (Joost Bürgi) put the marker not to the right of the units place, but above (or under) it, so that what we write as \(14.3\) would look like \(1\overset{\circ}{4}3\). The little zero marked the zeroth power, as we’ll see in a moment. Others put numbers over decimal places, like \(14\overset{1}{3}\). And some used a vertical bar as a separator: \(14|3\). Any of these works; what we have chosen makes it easy to add a fractional part to a whole number.

Curiosity made the mathematician!

Zeros at the end, I

There are several issues raised by zeros in decimal numbers. The next question, from 1998, is about the effect (or not) of zeros at the end of the number:

So a zero at either end, when there is a decimal point  in the middle, can be ignored, because it adds nothing and doesn’t change place values when it is removed.

We call this zero a place-holder – it is necessary so that other digits have the right places.

Zeros at the end, II

Here is a similar question from 2001, but with mixed numbers:

I answered again, giving essentially the same explanation. At the end, I added this:

We didn’t get a reply, unfortunately.

Next time I have one more discussion of zeros in a decimal.