Last time, looking at degenerate polygons, I mentioned some other issues pertaining to the definition of a polygon. Let’s take the opportunity to look at them. This post supplements what was said previously in What is a Polyhedron … Really?

Here is the question I referred to last time, from 2010:

We looked at definitions of a polygon last time, including the idea of successive sides being collinear (which we described as a degenerate case, and which is why I mentioned this question). We also saw that definitions can vary, and we’ll be seeing that even more here!

“Curve” in mathematics doesn’t refer to not being straight, but to being able to be drawn without lifting the pencil. “Simple” means it never passes through the same point twice, and “closed” means it comes back to the starting point. (My definition omits the more subtle non-collinearity condition that we focused on last time, and which Mark’s definition does include.)

One problem in Mark’s definition is the ambiguity of the word “figure”, or “shape”.

Mark’s definition did say that the polygon is “formed by” its sides, implying that the polygon is the edges, not the interior. It is common to think of a shape as including the interior, and in fact we’ll be seeing that ambiguity even in careful definitions. But to my mind this definition as the “curve” itself, not its interior, is a little more coherent, on one hand because the connectedness of the curve is a defining characteristic, and also because, as we’ll see, some definitions allow for self-intersecting (rather than simple) polygons, which don’t really have an interior at all:

A region is “connected” if any two points in it can be joined by a curve lying entirely in the region:

In order to be “simply connected”, any two such curves must formed a closed curve whose interior is entirely within the region, like this

In this figure, the boundary (the edges) do not form a single connected curve:

The first of these references is the subject of my post What is a Polyhedron … Really? The second is what we’ll look at below. Both investigate the variability of definitions, which is really as much a “feature” of mathematics as a “bug”.

He is correct, but …

I replied, perhaps overemphasizing my choice of definition:

Let’s check a couple definitions, as I didn’t do back then:

A polygon can be defined (as illustrated above) as a geometric object “consisting of a number of points (called vertices) and an equal number of line segments (called sides), namely a cyclically ordered set of points in a plane, with no three successive points collinear, together with the line segments joining consecutive pairs of the points. In other words, a polygon is closed broken line lying in a plane” (Coxeter and Greitzer 1967, p. 51).

The primary definition here is just the edges, as I take it; but they recognize that it is not uncommon to include the interior as part of the polygon.

In geometry, a polygon (/ˈpɒlɪɡɒn/) is a plane figure that is described by a finite number of straight line segments connected to form a closed polygonal chain (or polygonal circuit). The bounded plane region, the bounding circuit, or the two together, may be called a polygon.

This simply allows all possibilities as to what we refer to as the polygon.

Polygon
A number of coplanar line segments, each connected end to end to form a closed shape.

Self-intersecting or Crossed
A polygon where one or more sides crosses back over another side, creating multiple smaller polygons. Most of the properties and theorems concerning polygons do not apply to this shape. It is best considered as several separate polygons.

A polygon that in not self-intersecting in this way is called a simple polygon.

Here, the definition clearly covers only the edges; moreover, it does not exclude self-intersections, and in fact that case is explicitly discussed as a kind of polygon.

We’ll also see below definitions of polyhedra that take it for granted that a polygon is a plane region, so that it can bound a polyhedron.

Here is the question I referred to above, from 2003, which considers this same issue in three dimensions:

I answered, giving several references I found (three of which no longer exist, so I have replaced the links here with archived copies):

Here is a picture of a tetrahedron presented as the intersection of four “linear half-spaces”: 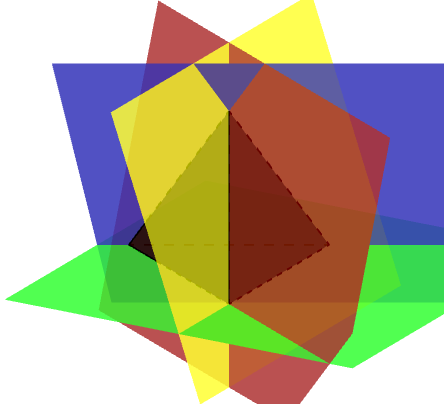 This definition is also discussed in the post What is a Polyhedron … Really? referred to above. In particular, I explain what in the world that last odd comment means.

But if you remove a cube from the interior of a larger cube, like the rectangles in our first question, that sort of “hollow polyhedron” would not be allowed … by most definitions.

Let’s check a couple current definitions, as we did for polygons. Here are the same three sources I used above:

In geometry, a polyhedron is simply a three-dimensional solid which consists of a collection of polygons, usually joined at their edges.

This site gives only the solid definition.

In geometry, a polyhedron (plural polyhedra or polyhedrons) is a three-dimensional shape with flat polygonal faces, straight edges and sharp corners or vertices. …

Convex polyhedra are well-defined, with several equivalent standard definitions. However, the formal mathematical definition of polyhedra that are not required to be convex has been problematic. Many definitions of “polyhedron” have been given within particular contexts, some more rigorous than others, and there is not universal agreement over which of these to choose. Some of these definitions exclude shapes that have often been counted as polyhedra (such as the self-crossing polyhedra) or include shapes that are often not considered as valid polyhedra (such as solids whose boundaries are not manifolds). As Branko Grünbaum observed,

“The Original Sin in the theory of polyhedra goes back to Euclid, and through Kepler, Poinsot, Cauchy and many others … at each stage … the writers failed to define what are the polyhedra“.

A polyhedron is a three-dimensional solid object that is made of several flat surfaces (faces). Each face is a polygon, that is, a flat surface consisting of a series of straight edges.

“Solid” suggests that it includes the interior; but it’s possible they are using “solid” in an older sense that essentially means “three-dimensional”, as in “solid geometry”. Saying that it is “made of” its faces sounds more like the surface definition.

Ultimately, we just have to follow the definition used in the textbook or other source we are using, which will be designed to fit the perspective they are taking!