Recently we have had a number of series digging into multiple aspects of an idea like area or percentages. But I am always running into miscellaneous questions that can’t fit into such a series because of their length or uniqueness. I want to spend the summer focusing on random individual questions, both old and new. This time, we have a simple question about a definition, that leads into deeper ideas about definitions in general.

What doesn’t count as a polyhedron?

In 2003, Tim looked at our definition of a polyhedron, and asked about the precise boundaries of that definition: 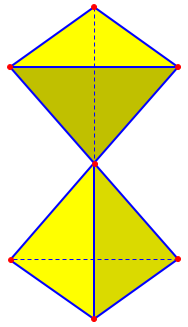 Tim recognizes that this shouldn’t be considered a single polyhedron, but doesn’t have an explicit reason to do so, and finds that our definition is insufficient. (As we’ll see, the “crossing faces” concept isn’t applicable.) Is our definition wrong? Is his idea of a polyhedron wrong? What is the real definition?

Doctor Tom was the first to respond:

A complete definition that would satisfy the needs of a mathematician (a topologist is one who studies the relationships within figures like this) would be far too much for elementary school use. That’s our first difficulty with definitions: They will vary according to the audience.

Here is an example of a path trying to stay in the interior but forced to pass through the vertex: 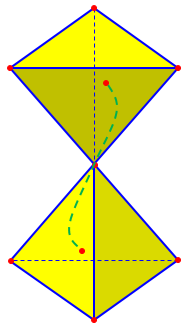 So that case is now excluded. Does this solve all such issues? No; there are other “pathological” cases that a complete definition has to avoid:

Here is an example of the “pushed in” case: 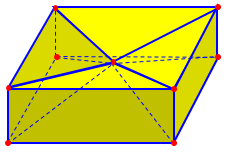 What features have we overlooked?

That’s not the end of refinements we’d need for a really thorough definition:

We are getting into the realm of topology, as exemplified by the rules required for Euler’s Polyhedral Formula to apply.

Note what he just did there: You have to decide what definition you want! There may not be one universal definition. As important as definitions are to math, this is a little scary.

When I play a game (or design one, as I have done), I like it to be one where the rules can be stated very briefly, and all the details unfold from that. This is not such a game; there may be rules that will have to be decided as we play and come across odd situations that weren’t imagined. How can mathematicians live with this?

As Doctor Tom was writing, I was writing independently, submitting mine 6 minutes after his:

Similarly, in an ordinary dictionary you will find multiple definitions for many words, as they are used in different contexts; and children’s dictionaries will express ideas very differently.

So some of the restrictions we have been considering really belong to different contexts.

I decided, as I often do, to find some other careful definitions for comparison.

The first restriction prevents us from, say joining two tetrahedra along an edge: 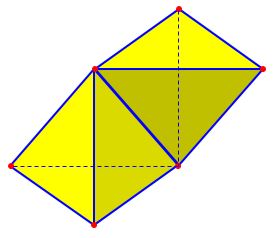 Here is a picture of this figure, taken from Wikimedia: 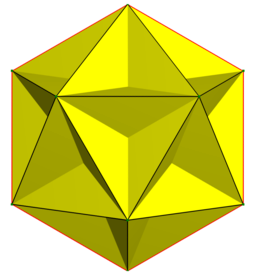 The faces are twelve pentagons, each of which passes through ten others. And this is called a polyhedron, though it probably goes against everything you think a polyhedron is!

So a definition of polyhedron can extend far beyond the elementary picture we have.

What is a definition … really?

That was the end of my initial answer; but the next day I had more to say:

Fuzzy at the borders

Broad can be good

See this post: Do Curved Surfaces Have Faces, Edges, and Vertices?

Major on the majors

After all that … keep it simple!