We have been looking at some classic “false proofs” or “fallacies”, where a seemingly valid proof shows something clearly false to be true. The goal is to learn from these, how to distinguish a valid proof from an error. In a post from last year, What Role Should a Figure Play in a Proof?, I mentioned in passing several false proofs in geometry; it’s time to look at two of them closely. One is a classic; the other is a student’s proof.

All triangles are isosceles

We’ll start with this classic from 1999. I’ve inserted newly created pictures to clarify each case; keep in mind that drawings in a proof are not “drawn to scale”, but represent assumptions, so for example what is said to be an angle bisector may not actually be so in the picture, but conclusions are drawn from the assumption that it is.

The proof seems to be very careful, considering all cases. What is missing?

Let’s examine this. First, I’ll draw the reality of case 1, where the bisector of angle A is perpendicular to BC: 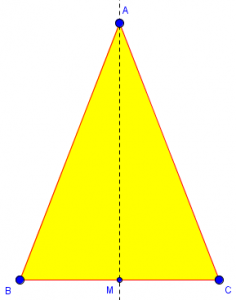 No problem there – that’s an actual isosceles triangle. 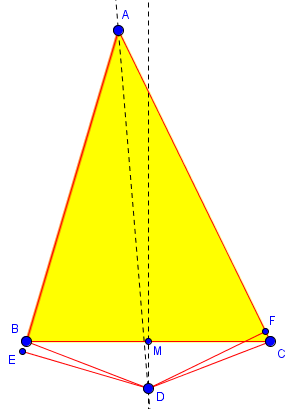 Here I have a genuine angle bisector in a non-isosceles triangle, and I can only make case 4; point D is always outside of the triangle. And when I draw in E and F for this case, I find that one is always on a side while the other requires that the side be extended beyond a vertex. (Here I have Doctor Rob’s second case.)

So, what was wrong in the “proof”? A wrong assumption about the locations of E and F, so that we got some signs wrong in the equations. As careful as the author appeared to be about considering all possible cases, that care was abandoned in the heart of the proof. The picture for case 4 presumably put both E and F on the extensions of their sides, failing to consider exactly the one case that actually occurs!

For more about the concept of betweenness, and its importance in proofs, see

Two sides and two angles make a parallelogram – not!

In 2009 we received this question:

This is a nice example of a “fact” that seems reasonable, and was true in every instance they tried, but that is not sufficient to show that it is always true. Doctor Rob showed how to make a counterexample that disproves the conjecture:

Here is a more accurate version of the final figure, showing the construction: 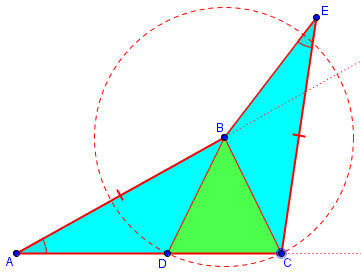 But in 2012, a teacher wrote us, proposing that the conjecture is true if we require the quadrilateral to be convex:

This seems very well written. But can you see where it is reminiscent of the isosceles triangle “proof” above? A lot will depend on how we draw our figure; in fact, looking ahead at my answer after sketching it now, I see that the two figures differ. Here is what I see as I write this (again, the figure is not meant to be accurate, as we can’t assume it is a parallelogram): 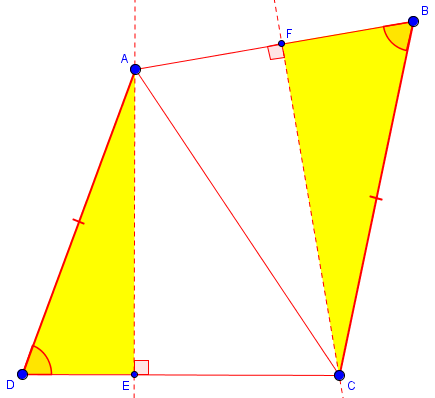 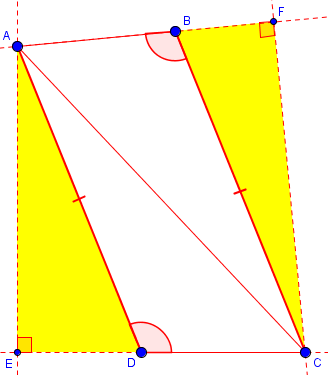 In both cases, the proof holds up. But what of other cases? If we change what is between, we may be able to create a counterexample. I continued, 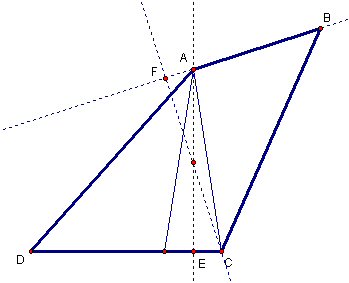 I closed by referring to the isosceles triangle “proof” above as my inspiration, and adding,

This, of course, is different from the false proofs we use as examples, because the conclusion is not obviously false. This is typical of actual mistakes made by students or mathematicians in attempting to prove something unfamiliar (and not unreasonable). That is where we apply the lessons from false proofs.