Questions about geometric proofs have often been handicapped by the inability to show us the associated figure (until we made that easier to do on this new site). In principle, that should not be a problem, because the statement to be proved should contain all the necessary information. It should never be necessary to refer to a provided picture to know what is to be assumed; one should be able to construct an adequate picture from the stated “givens”. Unfortunately, many textbooks seem to violate this rule.

Reasoning from an incorrect diagram

One student in 2008, aware of this principle but also familiar with the practice of textbook authors, asked a good question:

In the first of these, for example, one draws a picture of a triangle that looks (in one case) like this: 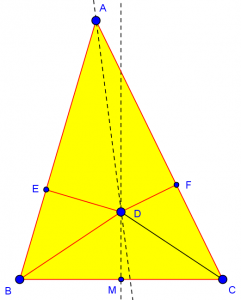 The proof claims to show that any triangle ABC is isosceles, using the angle bisector AD and the perpendicular bisector MD. The figure does not depict an isosceles triangle, because it would be inappropriate to assume it is; and line AD is not really the angle bisector as claimed; this is acceptable because (as I will be explaining below) dimensional accuracy is not required in figures used in proofs. But it is important that a figure show correct relationships between parts, particularly order relationships; and that is what turns out to be wrong here; D, E, and F will never have the relationship shown, from which it is deduced that AB = AC. Examples like this show that we must be very careful not to make assumptions – even obvious ones – from a figure we draw.

When is it right to “refer to the diagram”?

Yet, as Elisha observes, it is common for introductory textbooks (and tests) to tell the reader to look at the picture they have drawn in order to understand a problem. Is this acceptable?

I started out by agreeing with him about his objections:

(I misspoke here; the fallacy I had in mind was the proof that all angles are right angles, shown in the last three links above.)

Note that the other reason, besides the danger of fallacies, for not asking students to make assumptions from a figure, is simply clear communication. We might intend for the student to make just one assumption, say that points A, B, and C are collinear, but they might assume something else as well (say, that segment AB is longer than BC). In proofs, nothing should be assumed without being stated.

But there’s more to say. I continued:

My first point is that we might tell you to “refer to the picture”, just because it helps you understand something we have already stated: “Let E be the intersection of lines AB and CD, as shown here”. The second point is that figures can be used in at least two ways: to show what the statement of the theorem (or exercise) means, and to show what we mean by steps within our proof. In both of these, the pictures are helpful in communicating; but we must not let them do our thinking for us!

How can you use a diagram to discover a proof?

For another side of the diagram issue, consider this discussion I had in 2006 about a particular geometric proof, in which the role of pictures in writing a proof came up (no, this one is not a fallacy):

Jeroen is stymied by the difficulty of drawing an accurate picture in order to get started. My goal will be to show him that you don’t need a perfect picture before you start, as well as to suggest ways to make a picture that is good enough.

Right now, though, I have to figure out what the theorem means! So I sketch the triangle, initially making it something like the picture above, which was nearly isosceles with A at the apex. I find that the two centers are not even close. With a little more thought, I realize that the apex will be at C. That will help toward the proof; our goal will be to show that AC = BC. So here I have used some initial experimental sketches just to get a feel for what the theorem means, which is one important role of diagrams. The key term here is “sketch”! I don’t need to get it exactly right.

Now I will make a drawing in the online program GeoGebra, to show what my sketch was like. I show the circumcircle of ABC, with center O, and the incircle of ADC, with center I. With this technology, I can move points around until the centers coincide, and see that the theorem appears to be true: 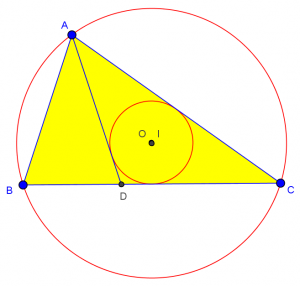 Now, I have the drawing that Jeroen struggled with. I did it here by using technology to make a flexible drawing that I could force to look right, discovering the theorem. But my initial sketch on paper was good enough. In fact, I don’t really want to use this perfect figure to work on my proof:

Okay, I was lucky back then; it took me longer to figure out the right orientation while I was writing this post, probably because I had the other picture on my mind! And this time, because I was using technology the way I did, I didn’t happen to discover that it doesn’t work for just any isosceles triangle. Let’s make another drawing the way I described in my answer, starting with an arbitrary isosceles triangle and constructing the two centers: 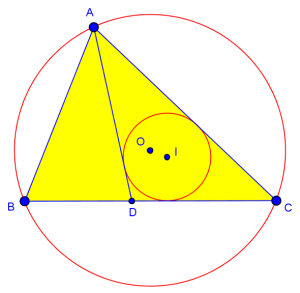 There we can see that the given conditions don’t hold for all isosceles triangles: the converse is false.

Now, what drawing do we want for our proof? Here is another useful trick:

I would normally make this figure by hand, just as a sketch, since precision is not required; but here is a precise version of the figure I just described, where all the conditions of the theorem hold except that AD is not really the angle bisector: 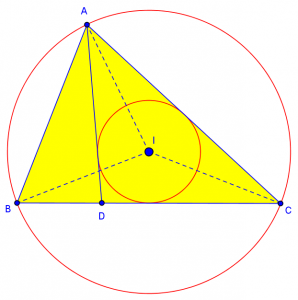 After marking angles as described (five angles known to be congruent to IBC, and BAD and DAC marked as congruent), I see something I didn’t notice in 2006: Even though AD is not actually an angle bisector in my drawing, the triangle is isosceles! So, rather than determine the additional conclusion that ABC in the theorem is not just any isosceles triangle, but (spoiler alert) a 36-72-72 triangle, we could instead relax the conditions of the theorem and still conclude that ABC is isosceles.

What can we conclude from this very interesting problem? First, we observed how we can sketch a diagram that is good enough to make the proof; it is perfectly reasonable to label an imperfect figure as if the assumptions were true, as long as the relationships are right (as they were not in the fallacious proofs we started with). Second, we have seen how the process of experimenting with a sketch can give us some ideas for the proof itself – even though we can’t use the sketch itself to prove anything. Third, we found that our attempts at drawing it revealed both a strategy for the proof, and ways to refine the theorem. Sketches are powerful tools; they just can’t be allowed to take charge.

I will close by pointing you to two more discussions that touch on how proofs relate to their figures:

The first of these relates to the fact that our initial approach to a proof should be exploratory, with a very different attitude toward details than in the final product: “A proof is not a history of how you first discovered a new place, so to speak, but a tour led by a guide who has been to that place before and knows what he is doing.”

The second points out that even explicit markings on diagrams are not to be taken as meaning more than what is said in words: “Students should be taught NEVER to take their givens from a picture, and that should include the assumption that what is not marked as congruent must not be congruent.”

3 thoughts on “What Role Should a Figure Play in a Proof?”