Today I want to look at a recent question that led into both geometrical and trigonometrical solutions, and particularly a useful perspective on the Law of Sines.

Here is the question, from March:

A quadrilateral ABCD is put inside a circle with radius 1.

I was given two hints as below: 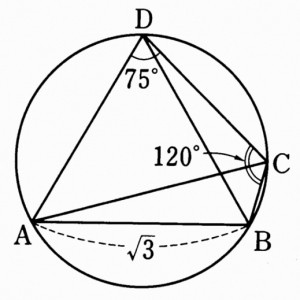 The figure, appropriately, adds nothing to the problem; the problem explicitly stated everything that matters. But the student was unsure whether it would be possible to draw the correct diagram without being given it. We’ll have to discuss the reasons for that question.

He also is unfamiliar with the formula, which, as I will point out, is actually part of the Law of Sines. Finally, he doesn’t see how to apply it. So we have several things to discuss.

I replied, first discussing how I solved the problem myself, using only geometry:

I solved it using no trigonometry except for one little right triangle. The main tool I used to solve this was the fact that an angle inscribed in a circle equals half the subtended arc:

First use elementary trigonometry to find half of angle AOB, where O is the center of the circle, by forming two congruent right triangles.

Then you know arc AB.

Use angles ADC and BCD to find arcs ABC and BAD.

Then you can find all the individual arcs, and from them find the requested angles.

Since we never quite got back to this method in our discussion, let’s complete this now. I’ll redraw the figure, including the center O and a few extra lines: 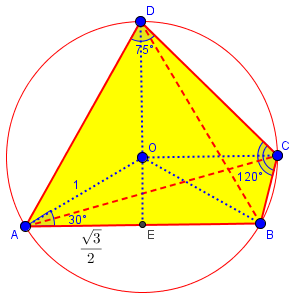 (This is drawn to scale; notice that the original diagram was almost exactly correct, though there was no promise that it was.)

Next, I answered the first question, about drawing the figure if we weren’t given one:

As for the shape, you are told that the quadrilateral is inscribed in the circle, I presume, not just that it is inside the circle. That is, the vertices lie on the circle, not just inside it. You can then assume that a quadrilateral ABCD is non-intersecting, so that the vertices are in that order around the circle. Nothing else is needed to make an adequate figure to show the relationships. No angles have to be correct in order to solve the problem. (My own figure, drawn before looking at yours, happened to look like yours flipped upside-down, but would not affect any work.)

The ideas here reflect what I discussed in the post What Role Should a Figure Play in a Proof?

All the work could have been done just as well with a picture like this (which might be what I would have drawn myself), in which the angles and lengths are reasonable but not precise, and I drew the quadrilateral clockwise: 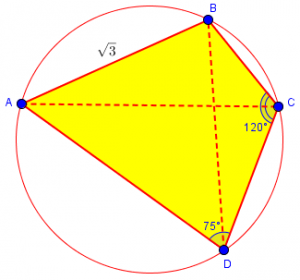 The Law of Sines – more than you knew!

Next, I answered the second question, about the provided formula:

As for the formula 2r = AB / sin ADB, that is a version of the Law of Sines, which says that in any triangle, the ratio of each side to the sine of the opposite angle is the same, namely the diameter of the circumscribed circle. This last part is often omitted! That fact could be used to find angle ADB, and then you could find arc AB, and so on following my ideas. Presumably the context of the question makes this an appropriate method for you.

Sine of an Angle and Opposite Side

I’ll look at this page later.

The student responded with three questions, which I will break up here in order to follow each immediately with its answer. First, about the figure:

For the image I sent, how can angle ACD be half of angle BCD? Is there any rule regarding this?

The image is not necessarily to scale; the angles are close, but may not be exactly right. This is typical: a picture does not have to be exact in order to communicate the facts of a problem, and it is common to explicitly state this in a problem.

But it does look approximately correct, doesn’t it?

I’m not sure what the question meant; having so far only drawn a rough sketch, I assumed he meant that in the figure ACD and ACB looked equal, but were not; but in fact they turn out to be, and the picture was quite accurate. Possibly what he meant was that in his own work, he assumed that CA bisects angle BCD, and wasn’t able to justify that assumption. If so, then that is an appropriate caution, and part of the reason to draw an intentionally inexact figure and consciously avoid making assumptions from what we see.

Second question, about the process of solving:

The central angle BOD of arc BAD is twice the inscribed angle BCD. (I actually found the degree measures [central angles] of the arcs, not their lengths, but there is not much difference.)

Let’s carry out the whole solution by this method, which is much like my own above:

A proof of the full Law of Sines

Now we can get back to that page I referred to, which included an incorrect statement in the question:

I hadn’t noticed that the question is wrong, and the correction is not emphasized in the answer. The question asks, “Prove why (sin A)/a equals the diameter of the circle,” which is incorrect; the answer says, “so a/sin(A) = D, where D is the diameter of the circumscribed circle,” silently correcting the error. But then it states the Law of Sines in the former way: “This gives a proof of the Law of Sines, which states “sin(A)/a = sin(B)/b = sin(C)/c.” The best form is what we state in our FAQ:

This is not uncommon: A question is asked incorrectly, we write back without calling the student’s attention to his mistake, and the archived answer consequently can be misleading. The archivist, in editing the exchange for publishing, had some difficult choices to make (as I am discovering as I try to do something similar in this blog).

The next to last paragraph then explains why the expression provided by the student has the wrong dimensions to have been equal to the diameter; this provides an explicit correction.

The first two paragraphs of the proof merely demonstrate the fact we’ve used several times, that the central angle of an arc is twice any inscribed angle subtended by the arc: 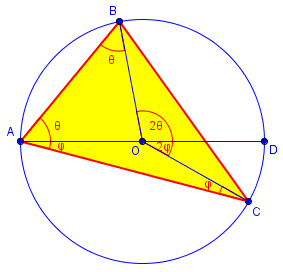 The core of the proof uses this picture: 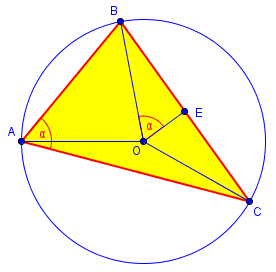 Let me restate this in a way that gets directly to the goal, rather than starting from the student’s incorrect expression:

There are several other ways to prove this theorem when we omit reference to the circumcircle, but this beautiful little proof is the simplest and most comprehensive.

Now we have finished our discussion, because our student was satisfied with the proof he wrote. But I’m not! We haven’t yet done what the problem asked, to use the hint (the Law of Sines) to find a solution to the problem. Let’s give that a try. 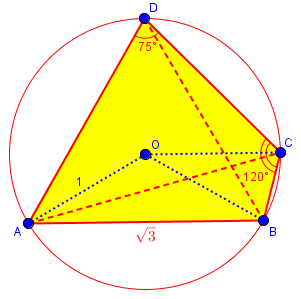 Those are all the same answers we got before – wonderful!

This is a nice approach; but the others were hardly more difficult, if at all. Sometimes figuring out how a hint is supposed to be used (that is, trying to read the mind of the problem writer) is harder than just solving without the hint. But the lesson here is a good one!

1 thought on “Circumcircles and the Law of Sines”