Doctor Pete answered; we’ll only look at the Law of Sines part today:

Proof of the Law of Sines using altitudes

Here is his picture: 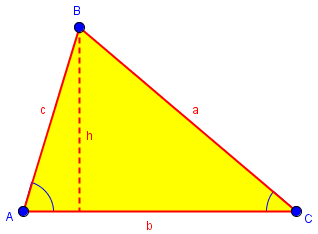 The last step was to “un-cross-multiply”, that is, we divided both sides by ac. 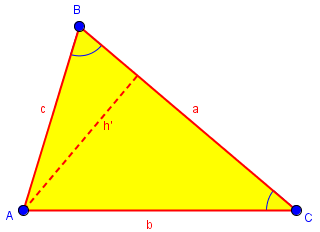 In the post Circumcircles and the Law of Sines, I showed Doctor Pete’s answer in Sine of an Angle and Opposite Side, where he was asked about it effectively in that form, but showed a different proof that actually demonstrated a fuller form (which I call “side over sine”) that also involves the diameter of the circumcircle: $$\frac{a}{\sin A} = \frac{b}{\sin B} = \frac{c}{\sin C} = 2R$$ We’ll see this form, and the associated proof, again below.

Proof of the Law of Sines using areas

At the end he offered another proof:

For another version of the proof via altitudes, see this answer from 2003:

A different proof showed up within an answer to a different question in 2001. First, we need to see the original question, which is interesting in itself:

In this formula, K is the area of the triangle (we use K rather than the more natural A for area to avoid confusion with the angle A); a, b, and c are the side lengths as usual; and R is the circumradius (the radius of the circumscribed circle, which contains the three vertices):

Doctor Schwa’s statement that he doesn’t know a geometric proof (one that avoids the trigonometry) led me to look for one, and I’ll offer that after we finish this discussion!

Peter mentioned using this formula to find the circumradius given only the lengths of the sides, using Heron’s formula, which we discussed in the post Area of a Triangle: Heron’s Formula I. This formula calculates the area K of a triangle from the lengths of its sides; combining that with the formula proved here allows us to find the circumradius. Specifically, this will be $$R = \frac{abc}{4K} = \frac{abc}{4\sqrt{s(s-a)(s-b)(s-c)}} = \frac{abc}{\sqrt{(a+b+c)(-a+b+c)(a-b+c)(a+b-c)}}.$$ (Here \(s=\frac{a+b+c}{2}\).)

Proof of the Law of Sines using the circumradius

A year and a half later, a reader, Gary, wrote to ask about that same line:

Clearly Gary is familiar with the law in the “sine over side” form we’ve seen so far, which deals only with ratios, and makes no mention of R. He offers a different way to obtain the same fact, which as we’ll see really amounts to a proof of the Law of Sines.

Here is his proof: 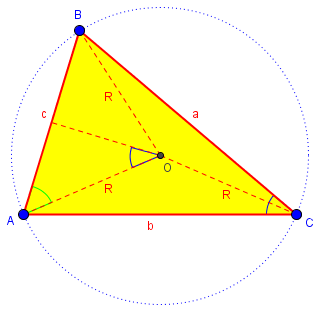 The green angle at A is the complement of the blue angle at C; I’m not sure how Gary determined that, but I would say that angle AOB, the central angle of arc AB, is twice angle C, so the blue angle at O is congruent to angle C. The cosine of the green angle is \(\frac{c/2}{R}\), and is also the sine of angle C. Therefore $$\sin(C) = \frac{c}{2R}$$ and $$\frac{c}{\sin(C)} = 2R$$ This is essentially identical to the proof I previously mentioned, in the post Circumcircles and the Law of Sines.

Doctor Schwa replied, first just stating the Law of Sines in the side-over-sine form as he knows it (and Gary did not):

This makes Gary’s proof another proof of the Law of Sines:

Since Gary had not fully stated the details of his proof, Doctor Schwa made his own explicit:

Yes, this is essentially the same as what Gary said. Here is an alternative way to get that ratio, a little more directly:

I promised a direct geometric proof of the area formula, which we can accomplish by simply incorporating part of the proof of the Law of Sines.

We can use the last figure above, including an altitude: 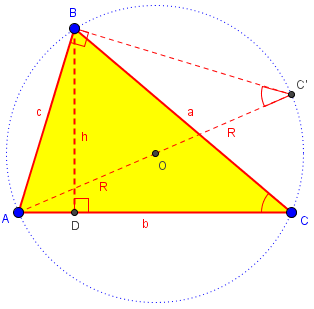 3 thoughts on “Proving the Law of Sines”