I’m in the middle of discussing the Law of Sines and the Law of Cosines, and in searching for questions about them, I ran across one that stands by itself. A student asks his teacher why his method without trig doesn’t work, and gets three answers from us. They are all similar, but from slightly different perspectives.

“Why doesn’t the wrong method work?” can be hard to answer sometimes! We could just say, “That’s not how we do that;” but when the wrong method felt intuitively right to the student, we want to overcome the underlying error.

Here is an example of an arc that has been doubled (from 40° to 80°), but the chord has less than doubled (from 1.4 to 2.63, not 2.8). It is clear that the two shorter chords make a triangle with the longer chord, so the latter is shorter than the sum of the former: 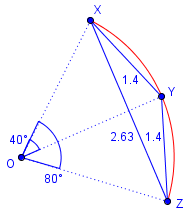 Within a triangle, there is even more going on, as each angle is a different distance from the opposite side. But the simple difference between an arc and a chord is enough to see the error.

Seven minutes later, Doctor Rob finished his own answer, focusing on the student’s idea of finding the number of degrees per unit of perimeter:

He has explicitly shown the contrast between the student’s assumed proportion and the real proportion, the Law of Sines. (You’ll note that he put the latter in the more complete “side to sine” form we discussed last time, which is not taught as often as it should.)

What did he mean by “some degrees cut off larger portions”? Suppose we rotate step by step, one degree at a time, through angle A. Each rotation cuts off a different length of the opposite side:

(I actually rotated AB by 2° at a time, rather than 1°, to make it easier to see.) This shows visually that the length of the side is not proportional to the angle; where the side is more distant, and at a steeper angle, there is more side per degree. There is not a constant number of degrees per unit of side, as there would be for a true proportion.

Another way to solve the problem

Doctor Rob continued with a separate thought about the problem itself:

This puts together some of the pieces we used last time to prove the Law of Sines; it makes sense that we can bypass the law by retracing parts of its proof.

Another fourteen minutes later, having seen the ideas already given, I gave it  my own twist, first restating the essentials:

I find it very common for students who have learned about proportions to assume two quantities are proportional just because that would make their work easy. Before applying proportions, it is necessary to have a reason to expect that model to be valid. I don’t think that is taught often enough.

My new perspective was to consider what the student’s method really does:

That is, suppose that a, b, and c were not the side lengths, but the arc lengths along the circumcircle. Then:

He divided the total angle in proportion to the arc lengths.