First, here is a question we looked at last time asking about both the Law of Sines and the Law of Cosines; this time we’ll see the answer to the latter part: 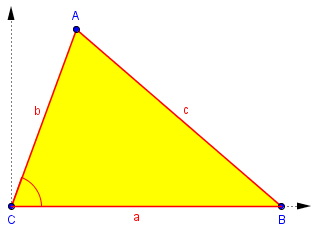 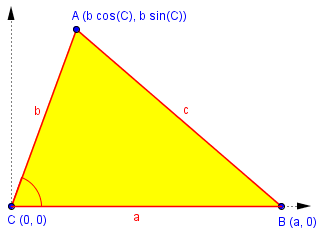 Applying the Law of Cosines to each of the three angles, we have the three forms

A virtually identical proof is found in this page we also looked at last time:

The next question was from a student who just guessed that there should be a way to modify the Pythagorean Theorem to work with non-right triangles; that is just what the Law of Cosines is. But since Brooke apparently does not know trigonometry yet, a mostly geometrical answer seemed appropriate.

So the Pythagorean Theorem can be seen as a special case of the Law of Cosines.

You may find it interesting to see what happens when angle C is 0° or 180°! These are not literally triangles (they can be called degenerate triangles), but the formula still works: it becomes mere addition or subtraction of lengths.

Now he gives an algebraic proof similar to the one above, but starting with geometry rather than coordinates, and avoiding trigonometry until the last step: 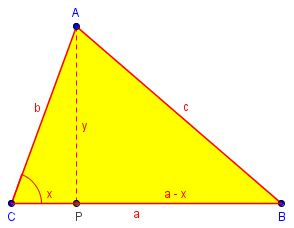 (I’ve swapped the names of x and y from the original, to increase the similarity to our coordinate proof above.)

This is the non-trigonometric version of the Law of Cosines.

The Law of Cosines in Euclid

Here is a question from 2006 that was not archived:

The Cut-the-Knot page includes several proofs, as does Wikipedia.

Euclid has two propositions (one applying to an obtuse triangle, the other to acute), because negative numbers were not acceptable then (and the theorems don’t use numbers in the first place, but lengths!). Neither trigonometric functions nor algebraic concepts existed yet, so everything had to be expressed in terms of geometry. This makes for a very interesting perspective on the proof!

If you never realized how much easier algebraic notation makes things, now you know!

If we label the triangle as in our previous figures, we have this: 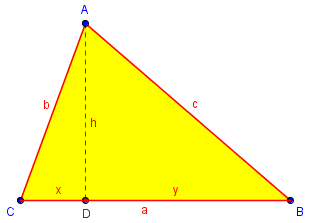 The theorem says, in the geometric language Euclid had to use, that:

Since \(x = b\cos(C)\), this is exactly the Law of Cosines, without explicit mention of cosines.

I won’t quote the proof, which uses different labels than mine; but putting it in algebraic terms, it amounts to this:

Again, we have a proof that is substantially the same as our others – but this one is more than 2000 years older!

1 thought on “Proving the Law of Cosines”