There is a beautiful formula for the area of a triangle, which many students unfortunately never get to see. In this post we’ll look at that formula and three ways to prove it; next time, I’ll show some examples of how useful it can be. (By the way, you’ll also see it called “Hero’s Formula”, based on a different translation of its Greek creator’s name.) Eventually in this series, we’ll get to some very practical problems about finding area.

Here is a good introductory question, from 1995 (when Ask Dr. Math was less than a year old):

As you may know from the SSS congruence theorem, a triangle is fully determined by the lengths of its sides, so that’s all you need to find the area. That is not true for polygons with more sides. Later, we’ll be looking at ways to find such areas, some of which involve breaking them into triangles and using Heron.

The formula is one that is easily memorized, though not easy to prove (and therefore one of the few that I have to memorize rather than recreate it when needed).

Here is our triangle, with sides a, b, and c:

So, why would this work? We’ve been asked that a few times, so here are three proofs: one using trigonometry, one using the Pythagorean Theorem, and one using circles and triangles. If you don’t follow one proof, try the next. The second will show a way I often work around the formula for those who don’t know it, so it’s useful beyond being a proof.

Doctor Anthony answered using the Law of Cosines, together with double-angle formulas for both sine and cosine.

(He uses a period for multiplication.)

It isn’t obvious how you would know to do this (that’s true of many proofs in their final form), but it’s beautiful how the parts of the formula fall into place two by two!

A year later, we got this question:

Doctor Rob referred to the proof above, and then gave one that I tend to use: 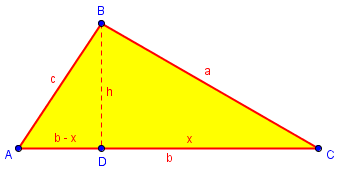 The algebra got pretty hairy there, though the basic idea is simple. Let me demonstrate how this method works as a calculation in a particular case, for those who haven’t learned (or forget) the formula:

Suppose we know that the sides of a triangle are 5, 7, and 8, and want to find the area.

If we don’t know the formula, we can do what we did in this proof (I’ve swapped the position of x to what feels more natural to me): 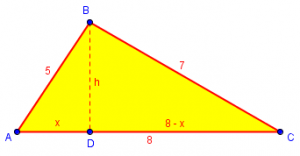 That’s much simpler than proving the formula, but a little harder than using it.

For an alternative approach, you could write an equation that says AD + DC = 8, and solve directly for h; but that is a radical equation that most of us would rather avoid! (I’ll be demonstrating it next time, though.)

Finally, in 2000 we got a request for a purely geometric proof:

Doctor Floor took this one (though his answer may not be what the hint was intended to lead to). Note that an incircle, or inscribed circle, is (internally) tangent to the sides of triangle, while an excircle is tangent to one side and to the extensions of the other two sides.

Take a moment to orient yourself; find triangle ABC, and the centers of the two circles.

We’re already starting to see the formula take shape, in the form of the three differences.

These are popping up all over the place. But we still don’t know any areas.

The pieces are coming together!

In this picture, the yellow triangles are the pair used above, and the green are used next: 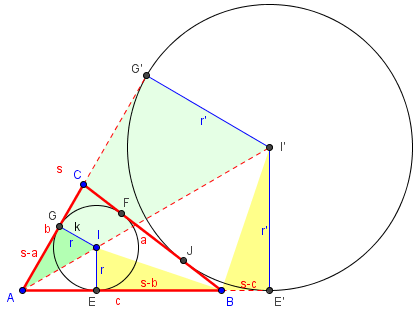 Now we have a formula for the inradius r of ABC. Look at this close-up of ABC: 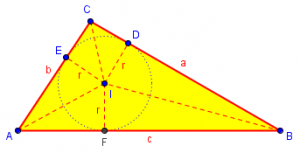 And there’s the formula!

Next time, we’ll use it in some useful and surprising ways.

3 thoughts on “Area of a Triangle: Heron’s Formula I”