We’ve been collecting techniques for finding areas of polygons, mostly using their side lengths. We started with triangles (Heron’s formula), then quadrilaterals (Bretschneider’s formula and Brahmagupta’s formula), and the fact that the largest possible area is attained when the vertices lie on a circle. We’ll look at one more way to find area, using coordinates of vertices, before concluding with the most practical application of all these ideas: finding the area of a plot of land.

Area of a polygon from coordinates

There are several ways to express the formula we’re interested in; I’ll introduce a couple of them, and then show a proof or two. First consider this question from 2002:

Doctor Tom responded with the formula, which applies to any polygon, not just a quadrilateral:

Let’s try it out for a random non-convex quadrilateral: 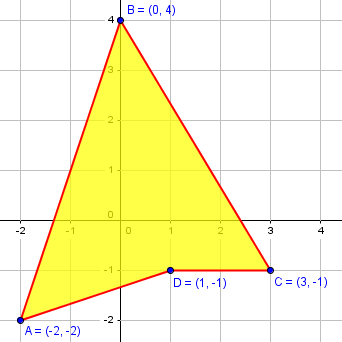 Clockwise, our vertices have coordinates

The formula would still work if the polygon did not contain the origin, and if the vertices did not have integer coordinates; I did that just to make the work easy.

The one bad thing about this formula is that, although there is a clear pattern to remember, it is a little awkward to put the right numbers in the right places. There are other ways to state it that make this easier. Consider this question from 1999:

Doctor Jerry responded with a version of the formula using determinants:

You can easily see that this is exactly the same formula. If you are unfamiliar with determinants, there are brief introductions to what they are here, defining them in terms of area (or volume), and also as a sum of all possible products:

There is, of course, a lot more to say about them, including how to evaluate larger determinants.

But there is an even nicer way to organize the formula, which is commonly called the Shoelace Formula. It is shown in the answer to this question from 2008:

Wikipedia has an illustration that can’t be ignored, showing why it is called the Shoelace formula, and how it works: 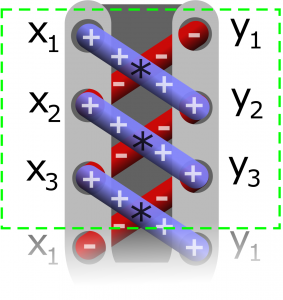 Why does it work?

As always, we have to ask why. If there isn’t a reason for it, it isn’t mathematics! This question, from 2008, is about the “atom” from which this “molecule” is built:

Do you see how this formula is one of the pieces from which the Shoelace is built? Given that it is true, the area of the polygon is just the sum of the areas of the triangles formed by each edge and the origin: 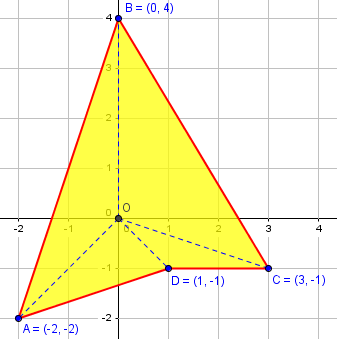 If the origin is not inside the polygon, some of the areas being added will be negative, so that the total is still the polygon itself: 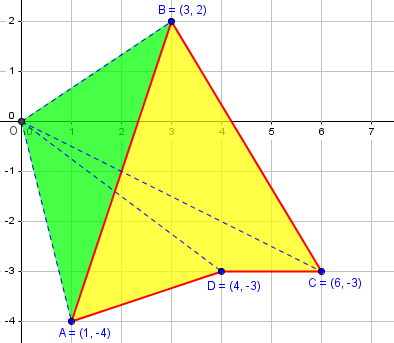 We’ll be looking again at determinants soon; but Gerry wants something fundamental, and will get it. I answered:

Note that the idea here is just like what I showed above for putting the triangles together, subtracting areas where the edge is “going backward”.

The fact that the sign indicates the direction of travel relative to the origin provides a way to tell if the origin is on the “left” or “right” side of the line determined by two points. This has many uses, especially in computer graphics.

This formula for the area of a triangle with one vertex at the origin can also be stated and proved in terms of vectors. See this question from 2007:

This formula gives the area of a parallelogram formed by adding two vectors; the triangle we are interested in is half of that: 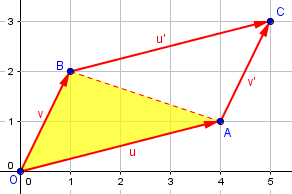 Here is the picture, in relation to my vectors above: 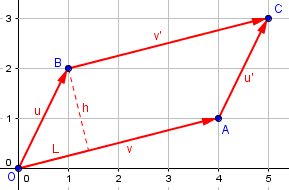 Another direction one could have gone is to use the vector product (cross product), whose magnitude is the area of the parallelogram.

Area of a triangle as a determinant (II)

If you know about determinants, you know that these are all equivalent; the fact that we give various forms shows that the order doesn’t matter, and each of us either remembers whatever form makes sense, or just reconstructs it in a random orientation on demand!

Here is a question asking about a proof for this formula, which as you will see is really identical to the formula above:

The three regions are what Americans call trapezoids, whose area is 1/2 the sum of the bases, times the height (which here is measured horizontally).

Here is another explanation of this formula:

For a similar formula for the volume of a tetrahedron given its four vertices, see

Next time, we’ll use these formulas and other methods to find areas of land plots.

1 thought on “Polygon Coordinates and Areas”