Last time we looked at applying Heron’s formula to problems about the area of a triangle, where knowing the side lengths is enough to determine the area; there was a passing mention of the fact that more is needed for quadrilaterals. We’ll start here with a repeat of that idea, and then look at several special cases.

First, consider this question from 1996:

To illustrate, here is one possible configuration of Paul’s property (solid lines, area 9935.25), and another (broken lines, area 10,405.58) obtained by moving vertices C and D so as to retain all the same lengths: 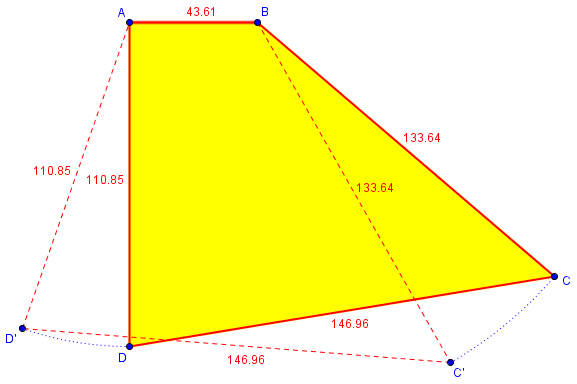 Any one additional piece of information, such as an angle, would be almost enough to fix the shape. But only if we know it’s convex. Here is another version, in green, that is concave but has the same sides and one angle (clearly with a smaller area, namely 6140.14): 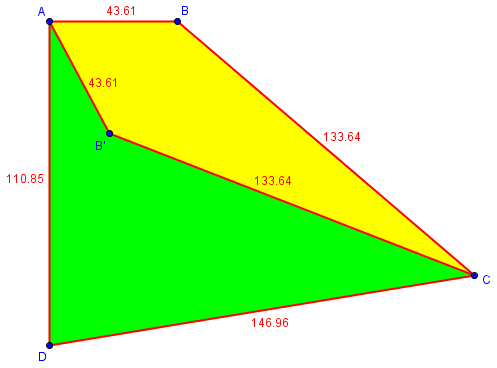 So, in general, we will really need 6 facts to determine a quadrilateral.

Looking at the extremes

For another illustration of this idea, consider this question from 2008:

I replied to this more general question, with a similar example in a simpler case:

We discussed training your intuition in the post When Math Doesn’t Make Sense.

Now let’s find some actual areas, where we do have enough information!

Four sides are enough for a trapezoid

Here is a nice question from 2008 that will make use of our ideas from last time:

We know that we can find the area of a trapezoid using the lengths of the two bases and the height (even though that is not enough to determine its shape!), using the formula \(K = \displaystyle \frac{h(b_1 + b_2)}{2}\).

So the four sides ought to be enough … except for that part about not knowing which sides are parallel. Hmm …

Note how I drew a generic picture without regard to actual lengths, just to let me think about the process; but the picture as labeled is nonsense, as the triangle would really be a line segment. (Try drawing the figure to scale, if you don’t see what’s wrong.)

Next, I did some work to determine which configurations would yield a valid figure, which I’ll let you read on your own if you’re interested. Here is the result:

As I said, for a different set of numbers, it is conceivable that there could be more than one valid arrangement; but this problem worked out nicely.

You may recognize that in the last post on Heron’s formula, the method I used here to find the height was the most difficult of three I demonstrated. Here is the work:

Call the method above the altitude-first method, or the radical equation method.

Here is my alternative, which we can call the area-first method, or the Heron method:

Alternatives for the trapezoid

Five years later, we got this comment from a reader, Denis:

This is similar to a method from last time in which I deferred finding the altitude of the triangle, leaving me with a mere polynomial to solve. Call this the base-first method, or the polynomial method.

Here is the work:

Then we find h:

Again, we got the same area.

This triggered further thoughts on my part:

But there are more ways to do it:

Can you find more ways to do it?

The biggest quadrilateral with given sides

There is one more thing to be said about trying to find the area of a quadrilateral given only the sides: We can at least determine the largest possible area. I’ve occasionally done that for someone who only knew the sides of their property; often the area will be reasonably close to the maximum, so that’s worth telling them. Here is one of two discussions we have had on this, from 2001:

Here is a picture: 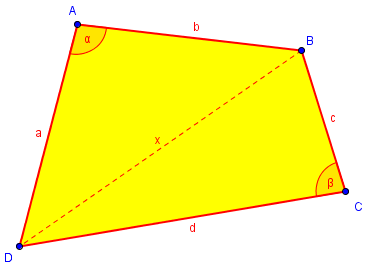 Doctor Rick took up the challenge:

Now we have beta in terms of alpha, and might have plugged that directly into the formula for area, but that would be monstrous. Instead, we can keep it separate:

All of this was given as instructions to Martin so he could do the work himself, but it’s long past the statute of limitations, so let’s do it for him.

So we have the condition for a possible maximum area, which turns out to be, in fact, the maximum.

Doctor Rick ended by referring to the following page from 2000, which gives a geometric/trigonometric approach to the question of maximum area:

I will omit Doctor Rob’s proof of the theorem (this post is already long enough), but here is what he said about the quadrilateral being cyclic (inscribed in a circle):

So the largest quadrilateral for a given set of sides has all its vertices on a circle.

Let’s apply this to the first problem we looked at. I drew two possible convex configurations of the property, whose areas (according to GeoGebra, which I used to draw it) are 9935.25 (solid lines) and 10,405.58 (broken lines) respectively. Here is the largest possible area, 10,480.49: 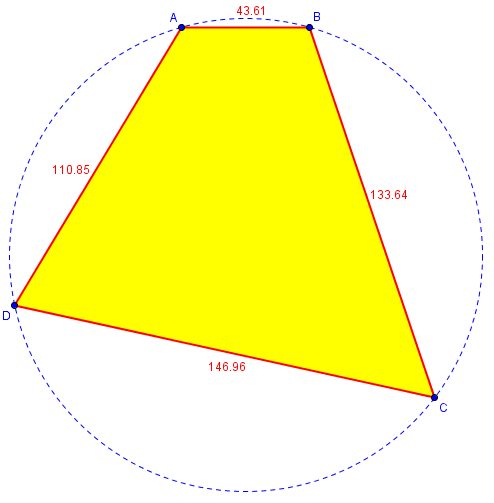 By the way, did you notice how similar Brahmagupta’s formula is to Heron’s formula? We get the latter if we just shrink the fourth side of the quadrilateral to 0. That makes sense, doesn’t it? And this formula is even more memorable than Heron’s.

It turns out also that the fact we are discussing extends to any polygon: the greatest area for a given set of sides is that of the cyclic polygon. Unfortunately, I don’t know of a formula that will give that area directly.

Next time we’ll look into formulas based on coordinates of vertices; then we’ll have all the tools we need to work on finding the area of your yard.