It has been a while since I have regularly included recent questions to this site, in part due to my focus on big topics. This summer I will be focusing on individual questions, some large and some small. Today, we’ll have two recent questions that look at the same idea from two different perspectives: rewriting a function and solving an equation, both using the angle-sum identities for sine and cosine. In each case, think of yourself as looking over our shoulders as we guide a student to an answer, and also try to help them do the same for themselves in the future.

Here is a question from Kurisada in February:

May I know why the key answer take only 1?

Is it must always be the positive one?

Kurisada hasn’t shown the specific method he used; there are several ways this might be done. It is not clear whether he was taught a mere formula to fill in, or only has examples in which the phase shift A is in the first quadrant.

For your first example:

It’s not uncommon for students to type something wrong; often we can recognize and correct the error.

The first thing to do is to look at the two answers, and see if we could determine the final answer from there; then we can go back and see if there is a way to avoid finding two answers.

This amounts to checking for extraneous solutions. Sometimes a method inherently produces false solutions, so we just do checks like this. Checking is a good habit anyway.

Solving with the angle-sum identity

Let’s go back now and see how the difficulty arose by deriving the solution for ourselves, rather than using a rote formula. We have the expression

We want to match this with the right side of the angle-difference identity (both sides multiplied by r):

The fact that the equation must be true for all x (that is, the two sides must be representations of the same function of x) is a key idea here. The result is a system of equations that we can solve for the unknown parameters r (the amplitude) and A (the phase). These are not linear equations, which you are more likely to be familiar with; but there is a standard way to solve this type, by looking for ways to combine the two equations to eliminate a variable.

Note that this does yield two possible values for each parameter, because of the nature of the two inverse functions (inverse tangent and square root).

In principle, having two values for each of two variables yields four possible pairs; but two of those pairs are valid solutions. Nothing we’ve done so far, though, determines which they are.

So what can we do to determine which two of the four possible pairings are correct? I don’t know how the author of your answer key did it, but here’s a thought. Pick the positive value of r (which is a reasonable rule for choosing between the two valid solutions), and plug that into equation [1]. Then we have

Thus the corresponding value of A must be the one whose cosine is positive, that is, we choose the value of A in quadrant I or IV. Thus if r = 2, A = 300°. If the coefficient of cos x, which gave us the left-hand side of equation [2], were negative, then for positive r we’d want A in quadrant II or III.

I haven’t considered your second example at all, but I expect the same idea to work there as well.

Thus the sign of the angle is determined by one of the equations.We could make a general rule from this: if the amplitude is (reasonably) taken as positive, then the signs of the coefficients determine the quadrant. If the textbook taught a “rote formula”, some rule like this probably goes with it.

There are other ways to carry out this process, one of which we’ll be seeing below.

Thank You very much Doctor for the complete explanations!

Now let’s look at another question, from May, which uses the same identity in a different context.

This came from Ahmed:

I am stuck at this question. I think it’s easy and I am just looking at it the wrong way:

This could be done by actually solving the given equation for x, and putting that in the new expression; but there may be a simpler way, and much to learn!

I replied as we often do when no work is shown:

One direct approach to try is to solve the equation for x, which can be done in a couple ways; then just evaluate the expression. (One method uses the angle-sum formula.)

If you tell us the context of the problem (what you have been learning that this is intended to exercise), it might suggest a more elegant method that you would be able to use. For instance, there is a nice insight you might get from thinking in terms of dot products of vectors, if you are studying that topic.

I got the same (rather simple) answer both of the ways I’ve mentioned.

Not knowing what he did, I wanted to help him use what he knows, rather than something that  might amaze him but be useless to him in the future! In asking these questions, though, I also tried to give hints that might be all Ahmed needs.

Firstly, Sorry for not clarifying

Secondly, this exercise is on angle sum formula so if you could answer it using it.

Good: now we have a method to work on. I started by checking to see if the Ask Dr. Math archive contained any examples of solving an equation like this using angle-sum identities, and offered them (though neither was as relevant as I would have liked):

Here are two examples of equations solved by the angle-sum identities:

Solving a Trig Equation Using Sine of a Sum

See if those help.

But there is a shortcut that avoids fully solving the equation. Compare the equation to an angle sum or difference formula, after first rewriting the equation as 3/5 sin(x) + 4/5 cos(x) = 1. Identify another angle (I’ll call it y) as is done in the examples, and then, without continuing to solve, look at the expression you are given and think about how it combines angles x and y.

I don’t want to give more than that hint, because it is fun to discover! Let me know what you find.

This is the start of an alternative method of rewriting this sort of sum, with some little twists.

Ahmed responded as I had expected:

He attached a list of identities he knows, and his work: 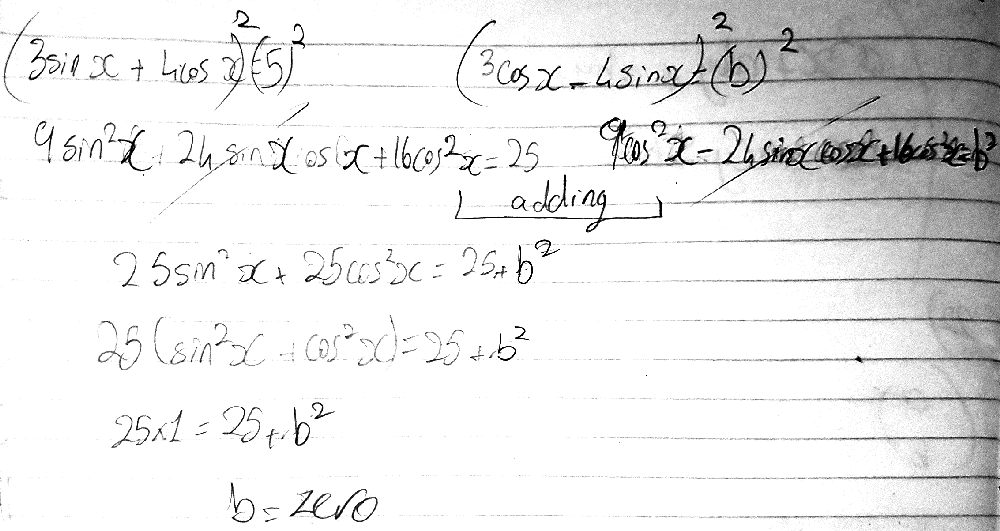 What he has done is entirely different from what I had in mind. He simply squared both the given equation and the desired equation (with a variable b inserted), then added the equations knowing the middle terms would cancel:

But this didn’t use the angle-sum identity, so it probably is not what was expected by the teacher, and showing the “standard” method was appropriate.

That is a very nice method! It is indirect, so not what I would have expected from a student, but that only makes it more creative.

can be seen as

from which we conclude that

So y is the complement of x.

But the other expression can now be put in terms of x and y, and can be evaluated.

This is the alternate method of solution I mentioned for the earlier problem above. We first divide by \(\sqrt{3^2 + 4^2} = 5\) so that the sum of the squares of the coefficients is 1 and they can be treated as sine and cosine of some angle y; that angle is the A in Kurisada’s problem we looked at first. In this problem, something special happens: we find that the sum of \(x + y\) is an angle whose sine is 1, so it must be \(\pi/2\) radians, or 90°.

That agrees with Ahmed’s solution.

I also mentioned a method for Ahmed’s problem using vectors. Here is one version of that solution: