There are several ways to restrict the range of values you need to test when you are searching for zeros of a polynomial (using the Rational Zero Test or the Intermediate Value Theorem, for example). One of them can be quite useful for difficult problems, but can be hard to follow.

Michael has graphed the function, and observed that the largest zero is x = 3, and the smallest is x = -1. 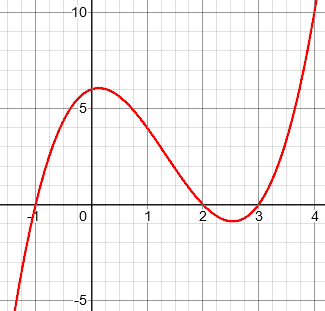 Therefore, 3 is an upper bound of the set of zeros, and -1 is a lower bound. But he finds that the theorem he was taught doesn’t tell him that.

If you are not familiar with the Rational Zeros [or Root] Theorem, see

Michael had found a seeming conflict between what the graph showed and this test; that’s because the test doesn’t tell you as much as the graph does. We’ll see that below. Further, the test is most useful in the hardest cases – perhaps harder than most exercises you are likely to be given.

So let’s look at the theorem:

There’s a detail in both versions of the theorem that many students miss:

Here are the synthetic divisions to test 3 and 4 as upper bounds:

Students at this level don’t have a lot of experience reading theorems carefully. The fact that the theorem only gives “a bound”, not “the best bound” is important, as is the fact that the implication only goes one way.

When is it useful?

Next, I looked at how the theorem is used in practice:

The whole point is to save work; and it fits perfectly into this process because you are already doing the divisions anyway – the work is free! In fact, it might be wise to try only integers at first, and then only test fractions that are within the bounds you find.

Michael replied, showing how his book stated the theorem:

The textbook is a good one. I replied:

The comment about looking for additional zeros brought another issue to mind:

This is not about the bounds theorem, but another way to save time in this long, tedious process: Whenever you gain new information, use it!

Michael responded, answering for himself the other interpretation of his question about using the quotient:

In other words, as you use up zeros, you may be narrowing the bounds within which subsequent zeros will be found; but you will never have to widen them, because the quotient has no zeros that are not zeros of the original function.

Then, referring to my point about recalculating the list of potential zeros, he added:

I closed the discussion with some final comments:

Finally, referring to his comments about things the textbook doesn’t say, I concluded with some words about teaching:

We can all learn each time we do math.

1 thought on “Bounds on Zeros of a Polynomial”