We’ve looked at the basic transformations of a function and how they affect its graph, then at how they combine, and then how they can interact with specific functions. Now let’s look at one problem from beginning to end, looking at a graph and finding the function that goes with it.

Alex is describing a problem in which he is shown a graph of one of the basic “parent” functions (like a parabola) that has been transformed, and has to determine the transformations of the parent function to obtain the function shown. His initial question relates to what we looked at last time, where both horizontal and vertical stretches might be involved, or they might interact in such a way that it is up to you to decide which to use. I answered:

After this I gave links to the pages we looked at last time.

Alex responded with the information I’d asked for:

The link contains this problem:

Exercise 4 – Finding the Equation of a Given Graph

The graph of y = x2 is shown below. Also, a graph that is a shift, a reflection, and a vertical stretch of  y = x2 is shown in green. Use the Function Graphing Rules to find the equation of the graph in green and list the rules you used.  Verify your answer on your graphing calculator but be able to explain all the shift rules used. 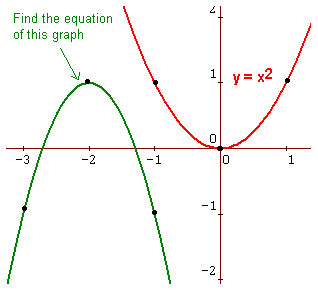 Since the parent function is a parabola, we know from last time that (a) stretches can be assumed to be vertical, since that is equivalent to a horizontal shrink, and (b) horizontal reflections are irrelevant, because the graph has left-right symmetry. That keeps the problem simple.

How to find the transformations

I started with general comments:

Something I didn’t say there is that it is not the graphs themselves, but the points shown, that tell me to use a vertical stretch. If they had shown different points, a horizontal compression might have been appropriate. Also, they chose a vertical stretch because, as I’ve mentioned, that is the easier one to use.

If Alex had been working with trigonometric functions, it would be necessary to handle both horizontal and vertical stretches; that was touched on last time, and I’ll be looking at that case later in this answer (and covering trig functions in a later post).

So we’ll pretend they didn’t identify the transformations, and go through the entire process.

Notice that I am not doing the transformations in the same order I see them; I have chosen the appropriate order first (based on ideas we’ve seen previously), and then filling in the details as I see them. 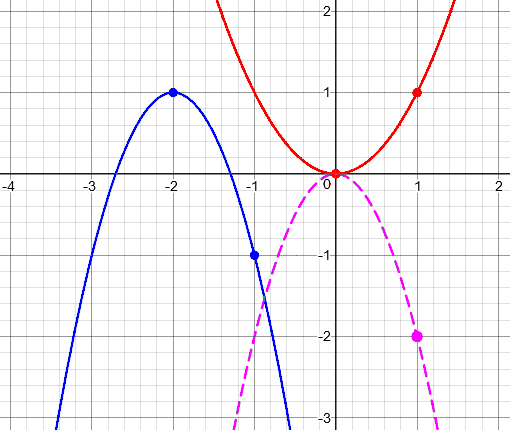 So that is our function. Or is it? There was a lot of thinking involved, which means there are a lot of places for possible errors. Therefore …

This example didn’t include everything that might have happened; if you want to learn well, it can be a good idea to try to give yourself a little extra challenge. I did that here:

Here is a graph showing these transformations (red, vertical stretch to purple, horizontal stretch and reflection to green, shifts to blue): 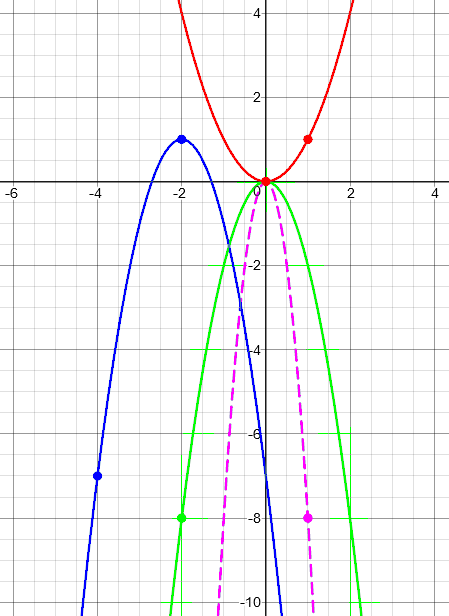 We weren’t quite done. Alex wrote back:

I filled in the gap: