Last time we looked at questions about how to shift, stretch, or flip a graph by changing the equation of a function. All our examples involved only a single transformation. Now we can look at cases where two or more transformations are combined. As we do this, we will develop a deeper understanding of how each transformation works, and how they interact.

We’ll spend most of our time with the following question, from 2004:

Since this is a favorite topic of mine, I answered:

I will be reiterating the key idea several times: the horizontal transformations (which affect the input to the function) should be thought of as replacing x with a new expression. I’ll also be emphasizing later some details on what each transformation does to the graph. As I said here, transformations can be applied in any order, but changing the order changes the result, so the trick is to find the order that results in the desired transformed function.

When I want to be sure of the order, I always take it step by step like this.

We would do this because of what the first example showed, that this order resulted in the factored form, with parentheses, so we used that form. As we’ll see later, some books teach this form as their routine method; I approve of that because this order of transformations works better for many students.

Many students find it more natural to do the stretch first, especially when they are reversing the problem, trying to recognize the transformations given the graph (a problem we’ll be looking at next time). When you carry out the stretch in the first form, you must be aware that the stretch starts at the axis, doubling distances from there, rather than from the “center” of the basic graph. As a result, the “center” of the graph ends up moving farther than the shift would suggest (to 2, rather than just to 1).

We can summarize the order of transformations this way:

I haven’t really discussed reflections yet, but since they also amount to multiplication (by -1), they are done along with the stretch.

In 2007, Elizabeth wrote asking for clarification:

Her example is a little more complicated because of the additional reflection; it will be a welcome addition here, to make everything more concrete. I replied:

Last time, I pointed out the idea of replacing x, but it only becomes essential here, with a combination of horizontal transformations. Her example is a perfect one to demonstrate:

Again, making one transformation at a time makes this clearer:

As before, I’m doing the shift first primarily because of the way the function is written. I could instead have first rewritten it with the function argument in factored form, as I will do later. 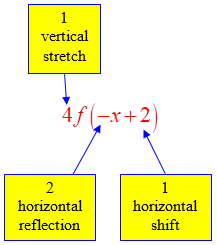 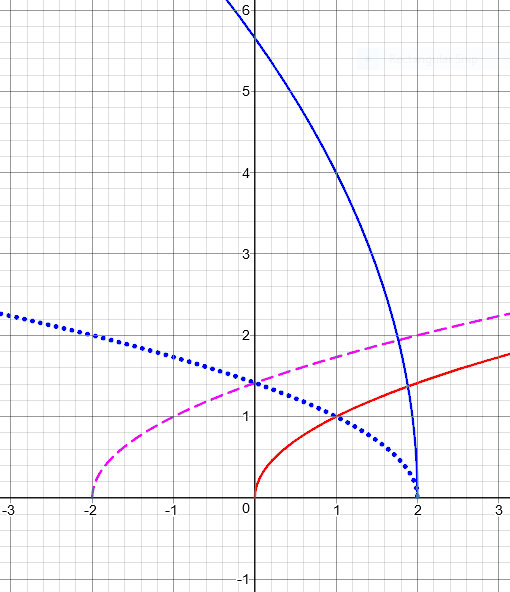 I closed by commenting on Elizabeth’s description in her last paragraph:

This 2007 page gives another example:

Looking at the graph

The next question, from 2017, faces the issue I mentioned about seeing the transformations of the graph incorrectly.

All of the work here is correct, except for the misunderstanding of what the graph shows. I replied:

Ayush is looking at the graph and seeing a shift of only 3 units; but that is the shift you would have done if you shrunk the graph first and then shifted.

Here is the graph of what Ayush has done, showing the intermediate step of shifting right by 9 units (purple) before shrinking (blue): 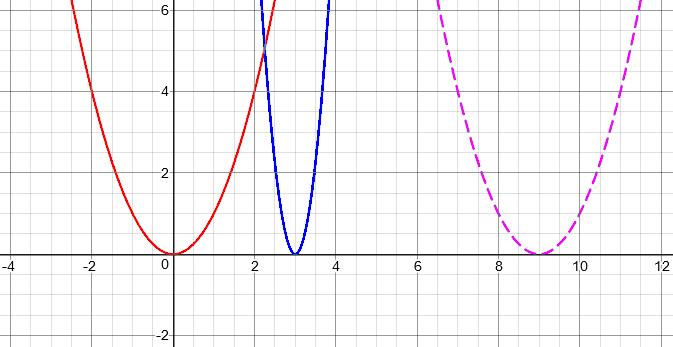 Of course, just checking a couple points can also confirm that the graph is correct, even if you are unsure of the transformations. But there’s more:

Here is a graph of this process, where we first shrink (purple) and then shift (blue): 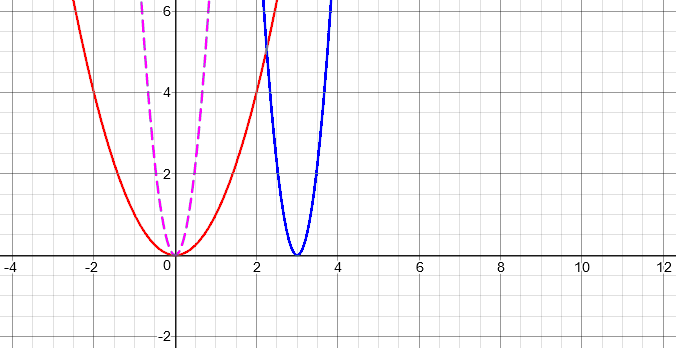 It is this shift that people tend to see when they look at a graph, because we think of the graph as getting thinner with respect to itself, not of the whole plane shrinking toward the axis.