A common topic in algebra courses is how to transform functions and their graphs. In the series starting today, we’ll start with the basics of how and why a graph is moved or stretched, then combine transformations and look at various special cases and other transformations, ending up with graphing trigonometric functions.

Translation means moving an object without rotation, and can be described as “sliding”. In describing transformations of graphs, some textbooks use the formal term “translate”, while others use an informal term like “shift”.

Our first question comes from 1998:

These examples represent the three main transformations: translation (shifting), reflection (flipping), and dilation (stretching). I chose to focus on the first only, suggesting how the student could discover what a transformation does to the graph:

Students often meet the standard form (vertex form) of the parabola before learning about transformations, so my example should be familiar; the vertex is (a, b) because the basic function is shifted a units to the right, and b units up. We’ll be seeing more of this soon.

Here is another very similar question from 2001:

Here are some actual graphs corresponding to the three above: 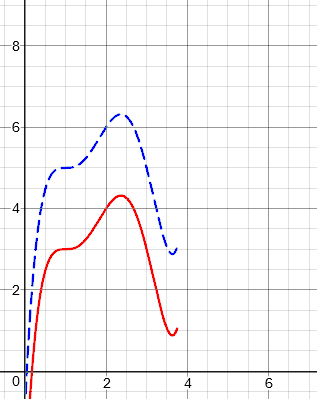 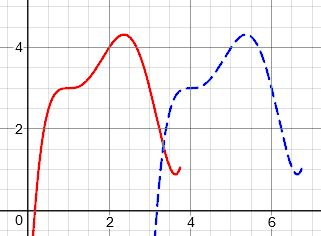 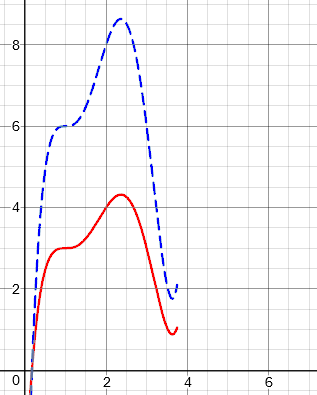 A note on reflection

None of these discussions went deeper into reflections than a brief mention in the first question. I will just add here that you can think of a reflection as a “stretch by a factor of -1”. That is, it just reverses direction. So a vertical reflection (reflection in the x-axis) is accomplished by \(-f(x)\), which changes the sign of y; and a horizontal reflection (reflection in the y-axis) is accomplished by \(f(-x)\), which changes the sign of x. These generally don’t give students any trouble, apart from remembering which is which. We’ll be seeing them again next time, because they do give trouble when we combine transformations.

The horizontal transformations, involving x, confuse many students. Here is a question from 2002 about just that:

I referred to the last answer, and gave a little more detail:

We have to add c to x to compensate for the fact that it will be decreased by c before being fed into function f. So replacing \(x\) with \((x-c)\) in the function moves every point to the right by c units.

In general, everything we do with x will be the opposite of what you might expect, for this same reason. This is true not only of horizontal shifts, but of horizontal stretching as well, which we haven’t seen yet. Here is a question specifically about that issue, from 2004:

Here is an example, based on our function above: 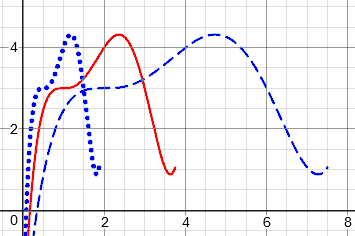 I first looked at the more natural vertical transformations from a new perspective:

The usual perspective multiplies the function value, obviously stretching it; here we are instead replacing y with y/k, forcing y to be k times as large.

We can do the same with translations, providing a different way to see the “oppositeness” of the horizontal stretch:

This last form may look familiar to you; it is the same form as the “point-slope” form of a line.

In this view, any transformation is accomplished by replacing a variable with a new expression that does the opposite of the transformation.

Why horizontal transformations are backward

This general issue came up again in 2013:

What do you call  it?

In 2014, we got a very different question, asking about the terminology of stretches:

I had observed that this terminology varies, and took the opportunity to research it a bit, breaking down what I found into cases:

The link under II(b) is broken; here is an image of what it said about this: 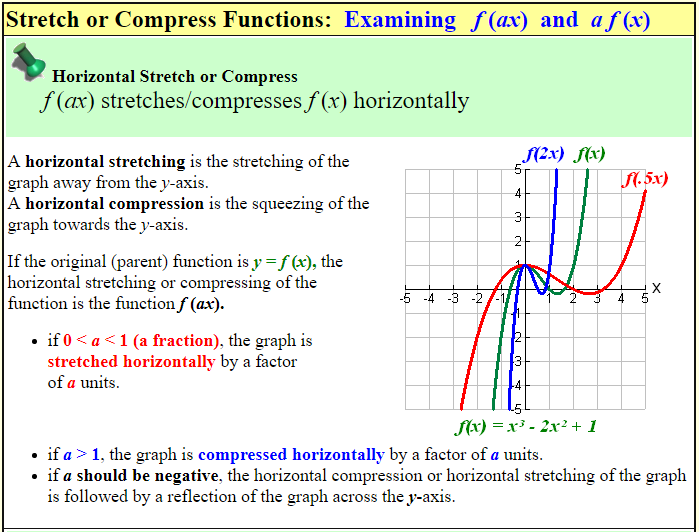 7 thoughts on “Shifting and Stretching Graphs”