The last two posts were about transformations of functions (shift, stretch, reflect) and their effect on a graph, first individually and then in combination. The next thing to look at will be how to determine the transformations when you are given a graph; but before we take that challenge in general, we need to see how transformations can interact with particular base functions, resulting in graphs that can be attained in more than one way. This can make it hard to decide what to call it; or it can actually make things easier, by letting us choose the easier of two ways.

We’ll first look at this question from 2009:

Jon has been given two functions to graph, and astutely observed that the results of a vertical stretch and a horizontal compression look essentially alike. What will he do when he is given a graph and asked to determine the function? 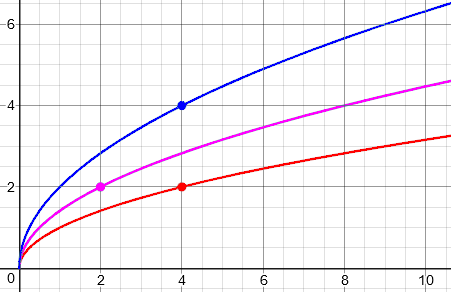 That is, our purple graph above could have been obtained by vertical stretching, as shown here by the dot at \((4, 2\sqrt{2})\): 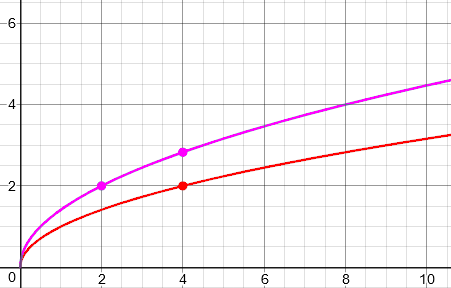 So the bottom line for Jon is that it doesn’t matter: We could have described the transformation either way, and we would be correct. It is impossible to say how the originator of a given graph obtained it; but either equation is correct because they are equivalent: \(h(x)=\sqrt{2x}=\sqrt{2}\sqrt{x}\).

This is due to the product property of the square root: \(\sqrt{ax}=\sqrt{a}\sqrt{x}\). Functions that lack this, or a similar property, will not have this ambiguity.

Squaring: are they really different transformations?

Another function with a similar property is the square. This led to a different perspective on the issue in a 2014 question:

Here we are combining a compression and a shift (using the format I recommended last time), then expanding into a form that pulls the 3 outside and squares it, changing the horizontal compression to a vertical stretch. These are the same function, but obtained by two different transformations. Here are the graphs and the points referred to, showing how the point (1, 1) transforms. First, horizontal compression (purple) followed by shift (blue): 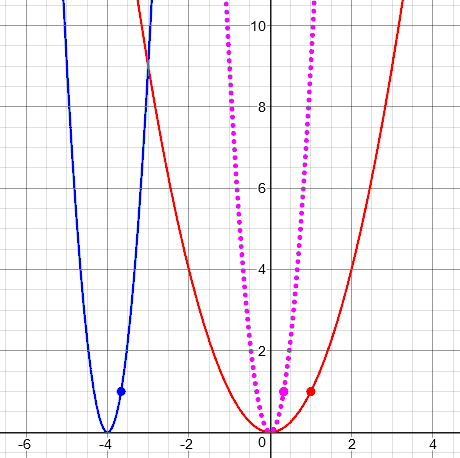 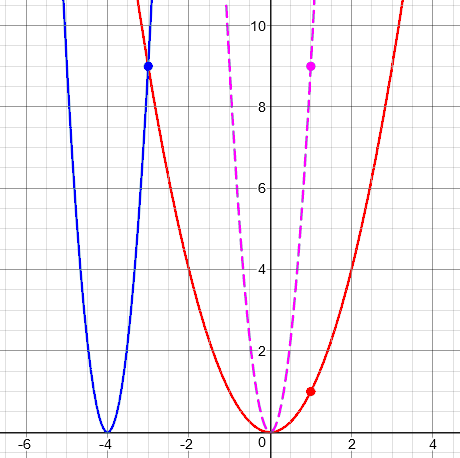 Both transformations have the same effect on the graph, but different effects on an individual point.

I replied, initially just pointing this out:

Rhonda replied with a question like the previous one:

The answer is similar to the last one, about square roots:

This last comment points out a property of the logarithm function that makes a horizontal stretch equivalent to a vertical shift! I didn’t expand on that idea, but here is an example: 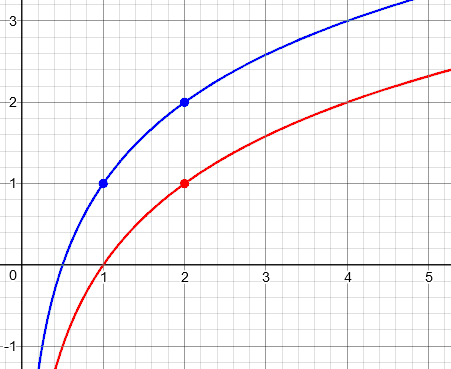 Something similar is true of an exponential function.

In each of these cases, it would be easier in practice to do the vertical transformation rather than the horizontal, which tends to be more confusing (as in Rhonda’s example, where she masterfully handled the mix of two horizontal transformations, but it took extra effort, and many students would have done poorly). So these mutable transformations can provide ways to save trouble in graphing or in writing the formula from a graph.

Let’s look at a 2016 question that takes Rhonda’s last question a step further:

Mark is using the term “dilation” where I have been mostly using the more informal term “stretch or shrink/compress” in line with students’ questions. One reason to prefer his term is that one word covers both directions. Math terms often work this way.

Having seen the previous answers, you may see where we need to go with this. What I like to do, when a student asks “Why can’t I …” or “What don’t I have to …” is to suggest that they try it and see. Here is my reply:

So only one of the two dilations is required in order to describe any one transformation; since vertical dilations cause less trouble, we generally treat any dilation as vertical.

The general formula for a quadratic function makes that decision for us, going with the vertical. If there were a horizontal translation, it would simply be the location of the vertex, with no adjustment needed for the stretching.

I have one more interesting interaction. This question is from 2017, and covers some of what we discussed last time, together with a new issue:

There are really two issues here. I replied:

Here, as I have done before, I rewrote the shift-first form to the stretch-first form, which in this case is reflect-first. So we first reflect the graph about the y-axis, which has no effect due to symmetry, and then shift.

The rest is a recap of the general principles I discussed last time, with a little more going on than in any example there:

Now we’re ready for a bigger problem that I will look at next time.