Having looked at all the usual transformations of a function and its graph, there are two more situations I want to look at. The first of these are the horizontal and vertical transformations introduced by absolute values (with a bonus thrown in: square roots); then next time we’ll conclude this series with a look at the special needs of trigonometric functions.

Absolute value on the outside: fold

In my answer, I will be ignoring the details of Loralei’s given graph, because she has made some mistake in describing it; as described it consists only of five points (two of the points given are identical) with no lines joining them. It is not a function, because two of the points lie on the same vertical line; its domain is not [-3, 3] but {1, 2, 3, 4}; and its range is not (-1, 2) but {-1, 0, 1}. I left the specific graph for a later question if she needed more help, and focused on the bigger issues that would allow her to work on the problem herself.

I started by reviewing the basics of shift transformations, which she said she could handle, as a starting point for this one:

Any part of the given graph that is above the x-axis will be left unchanged.

Any part of the graph that is below the x-axis is reflected above the axis.

As we have talked about shifting, stretching, and reflecting a graph, this transformation can be thought of as folding: flipping only the bottom half upward.

Now I had to deal with Loralei’s expectation that she could write an equation for whatever function she was given.

I expected to pursue the problem further, but she showed in her response that she needed only what I had given her. The next step would have been to demonstrate the process of graphing the transformed function by simply applying the appropriate transformations to each point of the given graph.

Square root of a function: erase and warp

Another question later the same month asked about the same absolute value transformation, and another that is harder (while still being an “outside” transformation):

The absolute value part was just a repeat of what I said above: 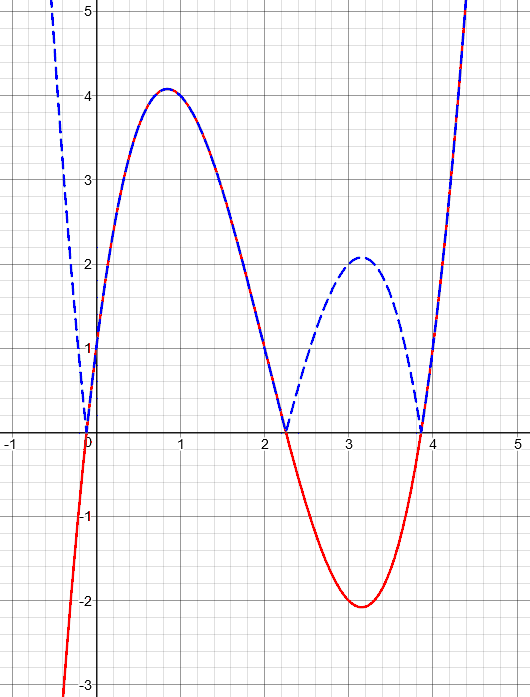 The square root is quite different, but like the absolute value, it discriminates between positive and negative values: 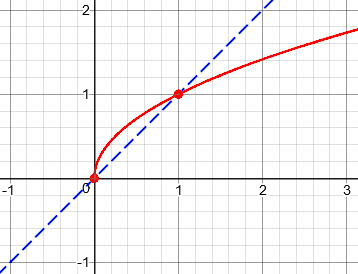 Now, take our random function, and apply the square root to it: 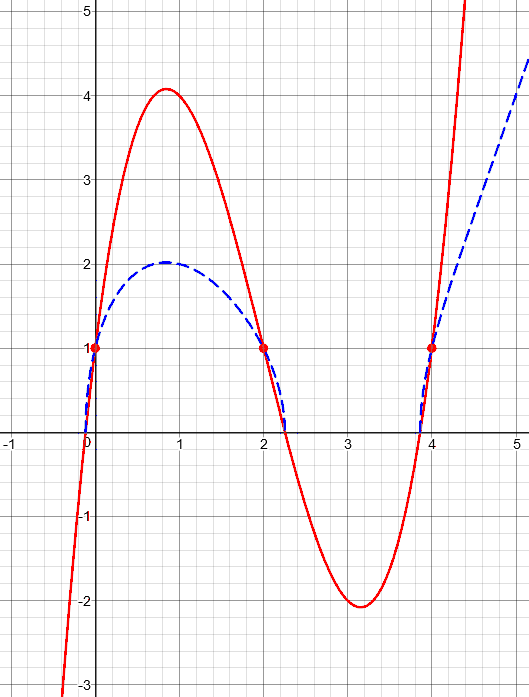 You’ll notice one feature I didn’t mention: Just as the graph of the absolute value approached the x-axis vertically at the origin, our blue graph approaches the x-axis vertically at each place where the original graph crosses the axis, even though the original was slanted there. It is above the red until the marked points where y = 1, and then is below the red. Where y is 4, it becomes 2. I doubt that a teacher would assign this and expect perfection; this question is more a matter of curiosity.

Absolute value on the inside: erase and duplicate

The first two cases are familiar to us now; I made a rough sketch of the graph Pavan described, and did a shift for the first:

(You may notice my shortcut: I really used the same graph and just moved the axes. We’ll be seeing this idea next time.)

Then I did the reflection:

The next one was a repeat of what we did above:

Now for the new one:

In the page I referred to, Doctor Marshall said this:

For more on the inside absolute value, see this question, which is about making a table of data to graph, rather than going directly to the graph:

The last thing I say there is worth a look:

That is, all the other “inside” transformations did something to x that could be reversed, so that any input given to the function only occurred for one value of x (shifted or stretched or reflected); but the absolute value means that we will get the same point from two different inputs, on the left and the right. The new graph consists of both the right side of the original graph, and a reflection of it over the y-axis. 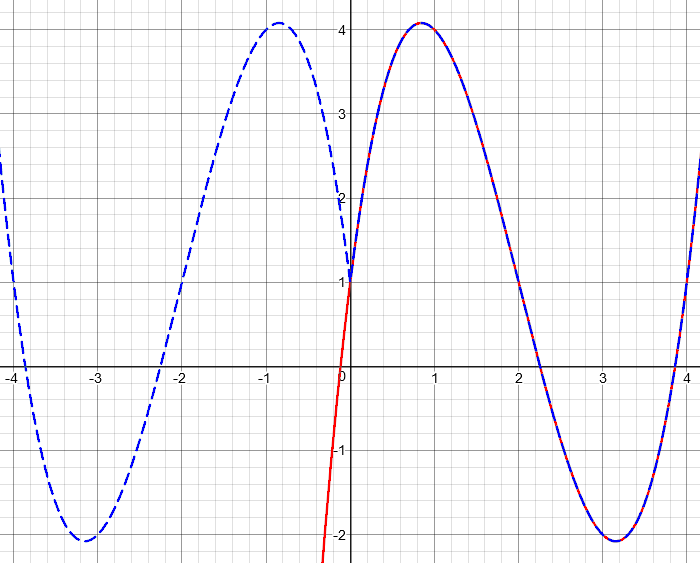 As explained, we ignore what was on the left side, and replace it with a reflected copy of the right.

2 thoughts on “Absolute Value Transformations: Inside or Out”