To start a series of posts on differentiation (one of the basic concepts studied in calculus), I’d like to look at a number of answers we’ve given to the basic question, What is a derivative? This includes questions about the meaning of the concept and its definition, as well as examples. Something all these questions have in common is that they come from students who have learned what the derivative is, formally, but they don’t feel they know what it really is. (We looked at the same topic from a single perspective earlier this year, in Derivative as Instantaneous Rate of Change.)

We’ll start with this question from 1998:

The phrase “as measured by something else” is important. What Doctor Pat means, I think, is that it need not always be a rate in terms of time, though most examples we give tend to be; it can be a rate like “miles per gallon“, which is a rate of distance compared to fuel usage, or “liters per kilometer“, which is a rate of fuel usage compared to distance, or “cubic feet per foot of depth”. Whenever we have a function that calculates this from that, the derivative will be the rate at which this increases for each change in that.

Here is an example of a stock index graph (Dow Jones, year-to-date):

It’s worth noting that this graph is not smooth, but jagged, so there is no instantaneous rate of change (derivative); the one-day rate is the closest we can come. 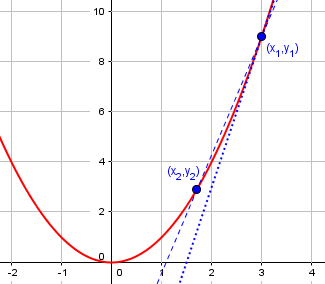 The derivative as a function

But there’s more to it than the derivative at a single point. Consider this question, from 2002:

This is a good place to point out an oddity in our terminology in English. The noun for what we are finding is “the derivative“, which basically means “a related function we have derived from the given function”. But the verb we use for that process is not “to derive”, but “to differentiate“, which comes from the “difference quotient” on which the derivative is based. The process is called “differentiation“. So, as Scott said, we “differentiate to find derivatives”!

So the process of differentiation (which in practice we would carry out using a simple formula that applies to any polynomial, rather than using limits) gives us a function whose value at any x is the slope of the original function. That is what the derivative is.

It turns out that this function form can be obtained from a “differential equation”, an equation that describes how the derivative is related to the function itself; here we are taking it as a given.

When we know the function, we can differentiate it to find the rate of change:

The “a” here is the same as the “\(x_2\)” in the first explanation. Observe how the two forms of the definition are related:

That is, the limit of this difference quotient, for any given value of x, is \(f'(x)\). That seems like a lot of work; but here is the magic of calculus:

Once you learn the quick methods for finding a derivative, you can forget how to calculate it as a limit, because that work has already been done for you. But it’s important not to forget the definition, because that is what the derivative means.

Observe also how the derivative is related to the original function in this case: It is just \(-k\) times the function value. This fact is the differential equation from which the original equation can be derived, because it describes the underlying fact about “exponential decay”: $$f'(x) = -kf(x)$$. This says that the rate of change (e.g. the number of atoms per second that decay) is proportional to the current amount.

Now let’s dig just a little deeper, with a question from 1996:

He chooses the same example as Doctor Jerry above, where the input is the time and the output is the amount of radium or whatever.

This is the average rate we’ve seen before, or the slope of the line joining two points on a curve. 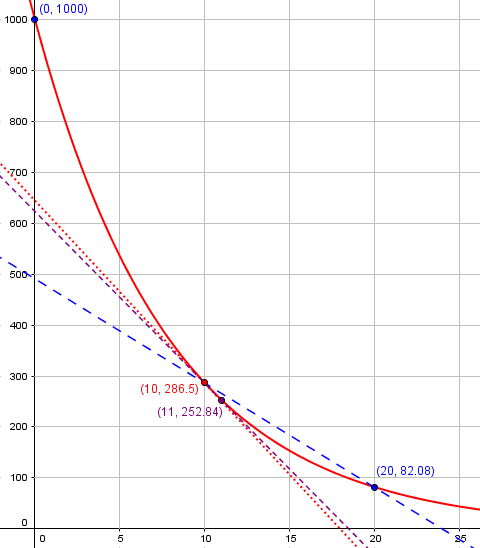 In other words, if you had to calculate this limit directly, you would often find that the fraction could be simplified by canceling an h; that is not always true, and sometimes takes a lot of work!

These are conditions for a function to be “differentiable” at a given point.

This is very important: Differentiation produces not a number but a function. In fact, as I see it, this is why the concept of functions was invented: to have a name for the thing that differentiation works on.

For more examples illustrating what a derivative is, see:

4 thoughts on “What is a Derivative?”