To close out this series on the definition of the derivative, I want to look at a few questions about alternative versions of the definition, primarily the “symmetric difference quotient”. We’ll see that this leads to a slightly different result, not always equivalent to the original, and we’ll observe some associated ways that calculators can lead students astray!

The first two forms were compared in the first post on definitions; here we’ll look a little more closely. The third is the focus of our attention here.

Here is a clearer picture: 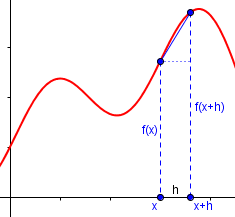 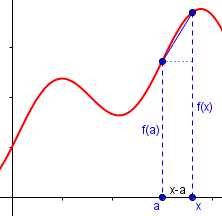 So why would we use this form? One reason is that the difference quotient looks more like the usual way we define slope, so it makes the connection clearer. It may be most often used in introducing the concept of derivative. 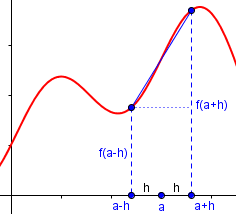 But, as you can see in my graph for the symmetric derivative, there is a major difference from the first two forms: Here, we don’t have one side moving toward the other, which stays fixed, but both sides move toward the middle, which is fixed. Everything is symmetrical about that point. In particular, we never evaluate the function at “a“, so this formula could work even if the function were not defined there. This results is some different behavior for “abnormal” functions, and is why we don’t use this as a definition for the derivative.

But the symmetric derivative is not equivalent

The next question, from 2006, is specifically about this alternative, and the answer digs deeper into it.

Greg has perhaps invented (or just recalled) the symmetric derivative, and found that it makes it easy to find the derivative of the sine (using a sum-to-product identity). Is this cheating? Or is it a valid alternative? 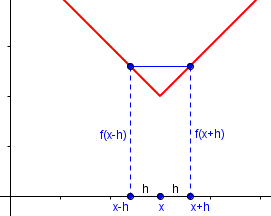 The symmetric difference quotient is always 0, so its limit is 0. But if we look at the usual derivative (showing both positive and negative h), we can see that there is no limit: 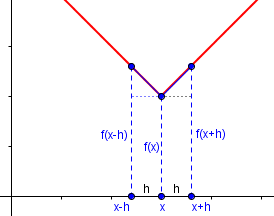 In Greg’s case, his work is not enough to prove that the derivative of the sine is the cosine; but if he had previously proved it to be differentiable, then it would.

Note the mention of computers; we’ll be getting to that momentarily!

Greg was right both that his work was valid, and that it was questionable!

Now let’s look at a case where a calculator uses this method. This is from 2003:

There are a couple odd things here! Not only is \(\frac{\sin(2x)}{2x}\) not the correct derivative; it also isn’t a numeric derivative, which would have to be a number!

I did some research on calculators, made a diagnosis, and then answered:

(It doesn’t actually take the limit, but uses a small value of h as a stand-in.) For example, if we entered “nDeriv(sin(x), x, π)”, we would get approximately \(\frac{d}{dx}\sin(\pi) = \cos(\pi) = -1\). What Cindy entered, according to my guess, would produce the same result if the variable x held the value π. The calculator would find this, not by knowing that the derivative of the sine is the cosine, but by numerically evaluating the symmetric difference quotient for a small value of h (namely 0.001).

Here is an excerpt from the TI-84 manual explaining this: 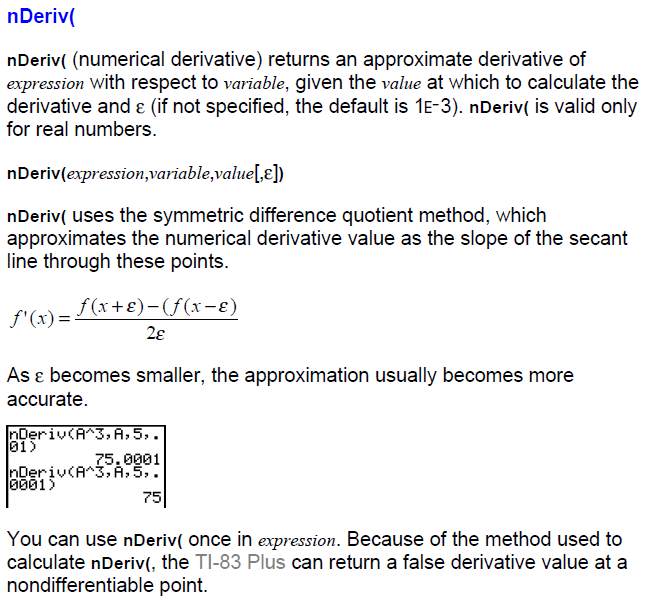 Note that they mention at the bottom what we’ve already seen, that it will not report when there is no derivative.

But that’s not what Cindy got.

Here is the TI-89/92 manual entry for the nDeriv function:

This difference in syntax was my clue to what Cindy must have done:

When you use a calculator, read the manual! And don’t just remember what a seemingly similar calculator does.

Sometimes the calculator is right

While we’re thinking about calculators, here is one last question, from 2001:

Interestingly, this is a case where the symmetric derivative, which we know the calculator uses, can exist even if f(x) does not! That’s because it doesn’t use f(a). My suspicion is that the calculator may first check for the existence of the function.

Filling in the “hole” (as Komol did in simplifying) would make the derivative exist; but that would be a different function.

A “hole” is also called a “removable discontinuity”. This means that it can be removed if you fill it with the right value. If you put in the wrong value, it will be like a bad patch of a pothole, still damaging your car.

1 thought on “The Symmetric Derivative”