Last week we looked at a recent question that touched on the idea of the derivative as a rate of change. Let’s look at a long discussion from a few years ago digging into what that means within calculus.

Instantaneous rate, or rate per inch?

The key, as you may observe, is the word “instantaneous”. Doctor Ian answered the “why” question:

These are the (average) rates of change over smaller and smaller intervals starting at 6.

We can see that the numbers are approaching something around 452.39, which we saw previously is the derivative. That is, the rate of change over a very small interval is, essentially, the instantaneous rate of change. 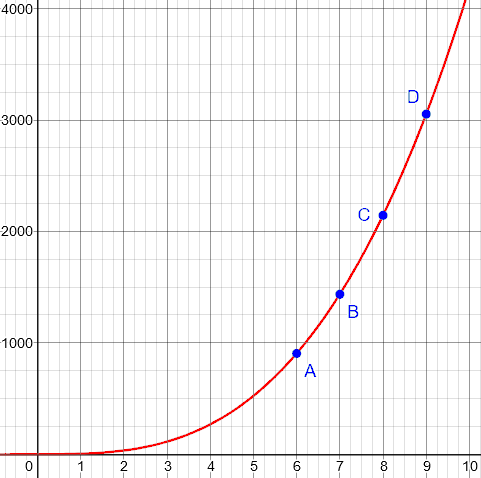 We’re looking at these slopes: 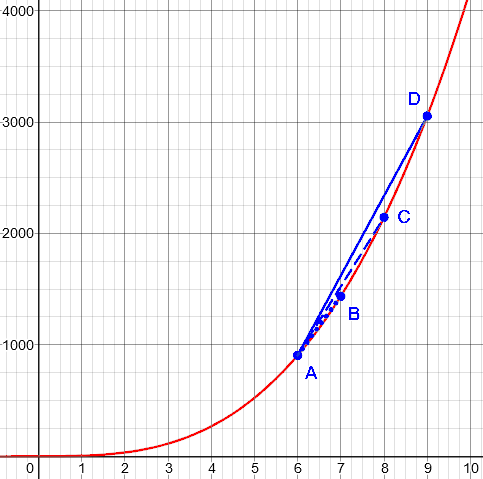 But a change has to be between two points!

Why do we care about small changes?

(This wouldn’t actually be the last question; that’s okay!) 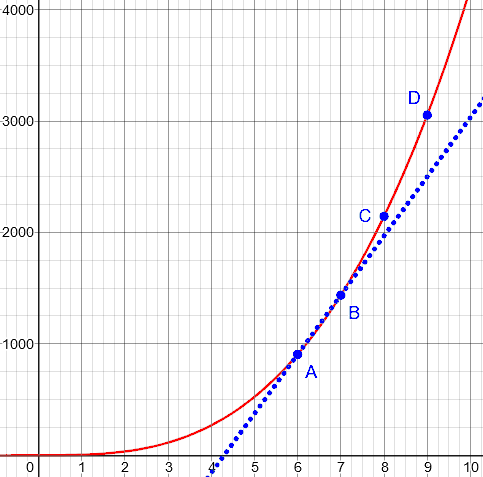 Here’s what it looks like using the instantaneous rate: 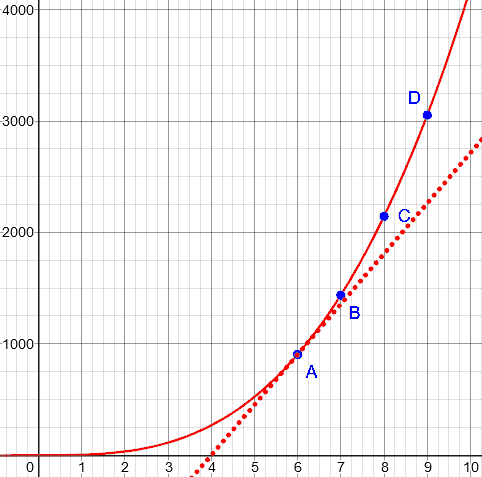 There, nothing fits exactly; but the approximation gets better closer in.

Integration is the inverse of differentiation; it adds up small changes that are themselves changing.

But why would we have the derivative, but not the actual equation? That’s where things get interesting:

The laws of nature are usually about small changes

To put it another way, the book of nature is largely written in differential equations, that tell how a change in one quantity affects others.

Tristan returned to the original question:

Doctor Ian first responded to the question of how close you have to be:

How about the question of irrelevance to numbers distant from 6?

This example is an extreme of extrapolation, where the actual function (the tide) goes up and down, and we are trying to approximate it with a straight line. The approximation might be good within an hour or two, but not into the next cycle:

So approximation by the derivative only works within some interval around the given point. But sometimes that’s good enough:

Keep in mind that the original problem said nothing about time; it was about the rate of change of volume with respect to the radius. If the radius grows by an inch a second, Tristan is right; but slow growth might mean the approximation is good for hours or for years.

What is the speed right now?

This is all common sense: We can’t literally calculate the car’s speed at a single moment, yet the concept makes sense, even though the speed may be constantly changing, and our average speed over the next minute or hour will not be what the speedometer shows right now.

Rate need not relate to time

Tristan was satisfied there, but his next query brought up another issue:

Doctor Ian agreed with the analogy:

But he wanted to point out a difference pertaining to the “meter”:

After giving a different example, he concludes:

We might say, the reason we care about small changes is that without understanding them, we won’t get the big changes right. And if we confuse the two, we’ll be in even bigger trouble.

1 thought on “Derivative as Instantaneous Rate of Change”