Last time we looked into terminology related to negative numbers; one subtopic was too big to fit, so I’ve broken it out into a separate post. How are the concepts of “negative” and “minus” (subtraction) related? How much do we need to distinguish them? We’ll look at two questions, the first from a child focused on the words, which are often confused, and another from an adult wanting to untangle the symbols, which are normally identical though they have different meanings.

First, from an anonymous student in 2002:

[Note: If this sounds totally foreign to you, you should read the discussion in the comments below, which points out that this appears to be a largely American usage; this question and answer assume that context.]

Rather than give a routine answer, Doctor Achilles started with a bit of history:

Before there were negative numbers, there were operations. Subtraction was read as “minus”, which is Latin for “less”, another term that is sometimes used: “nine minus five” or “nine less five”. (Adults don’t say “nine take-away five”.)

The point is that the words “plus” and “minus” represent operations.

The word “negative” describes a number.

Unfortunately, people do often use “minus” in place of “negative”; my dictionary even gives the example “minus ten degrees”. It can be hard to keep straight!

He isn’t very sloppy; he just uses “minus” to refer to the symbol, however it is being used.

The student did write back:

Everyday language is not precise.

Our second question, from Chris in 2005, is about the symbol:

We often think of the negative sign just as part of the name of a number (which is how Doctor Achilles used it in his answer above); Chris rightly sees it as an operation (the “negative of” that we talked about last time). But that means we are using one symbol to represent two different operations. Would it be helpful to use two different symbols?

This is, ultimately, the same idea Doctor Achilles was emphasizing: Minus and negative are different things. But now we need to explore how they turn out to be related so closely that, even though we use two different words, we can use the same symbol. And distinguishing them will help us to see this!

You may recall that two weeks ago we saw that DeMorgan represented negative numbers by a bar over the number, as seen here (p. 46):

Cajori mentions several mathematicians who used each of these notations:

Here are two such calculators, with green “minus” and yellow “negative”: 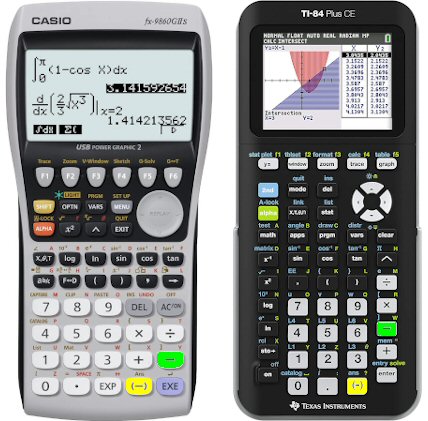 Other calculators, in which operations apply to the number in the display rather than being entered as they would be written, use a “change sign” button instead (red here): 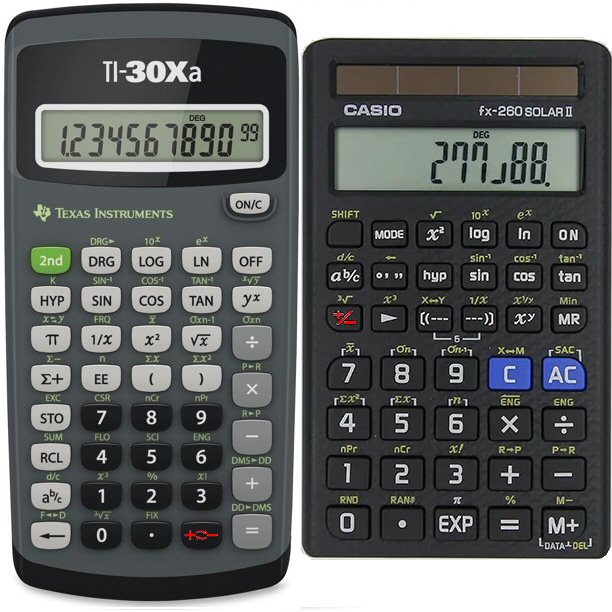 Here’s one difference between calculators and programming, that explains the need for the separate button: In a program, each statement has a definite start, so if you type, say “– 2 – 3”, it is clear that the initial “–” is a negative sign, because there is nothing before it. But in many calculators, if you enter “– 2 – 3”, it will assume you are continuing a calculation using whatever was previously calculated, so that there is in fact something before the sign; some, for example, will display “(ans) – 2 – 3”. If the display previously showed 0, the result will be what you expected, but otherwise you will be subtracting 5 from the previous result. The separate (–) button prevents this from happening.

Aside: A similar issue arises with students, who may confuse \(a-b\) with \(a(-b)\), especially in larger expressions. How can you tell whether “–” is a subtraction, or multiplication by a negative? This was discussed near the end of Order of Operations: Subtle Distinctions; the answer, as I just explained for computers, is this:

On the other hand, there are some programming languages with very different syntax, in which the distinction is needed. I vaguely recall the “high minus” symbol (raised negative) from my long-forgotten introduction to APL (one of the first languages I learned, in the 60’s); it is used like DeMorgan’s bar, not as an operation, but as an integral part of the numeric “literal”.

Subtraction as adding the negative

Once we have the concept of additive inverses (which necessitates knowing about negative numbers), algebra becomes far easier. Think about the fact that algebra existed before negative numbers were accepted, so that (as we saw two weeks ago) we needed separate cases for everything!

This is the benefit of “raised minus” notation: It’s enough like regular minus to see the connection, yet distinct enough to help students.

More on the raised minus

I did some searching of my own, hoping to find examples of the raised negative in modern materials; but at the time that was hard to find; the only source I found no longer exists. It is easier to find references to it today; one reference I find to it, here, says

A simple and useful example is the use of two different “minus” signs in school (at least in the USA), the normal “-” sign for subtraction, and the raised minus sign for indicating a negative number, ⁻7 for negative seven.  This notation, typically in use up to 8th grade, allows the text books to write  8 – ⁻7 rather than having to write 8 – (-7), for instance.  Teachers typically think of this negative number notation as a kind of training wheels.

Wikipedia mentions it (here) without citation. American teaching standards don’t mention it. But I find examples of teaching materials using it from the U.S. (1972), the U.K. (expand Use negative numbers in context),  Australia (e.g. pp. 14-18), New Zealand, and even the Philippines. (If you find better examples, let me know.)

Chris responded to what I showed him:

5 thoughts on “Negative vs Minus: Two Words, One Symbol?”