This week we’ll look at some Ask Dr. Math questions like, “How can a number be less than zero?” and “Why do we need negative numbers?” We’ll see a number of examples of their use, and how negative numbers make life easier.

First, we have a question from 1998, from a child who didn’t yet know about negative numbers:

My daughter is now working in a school (but not teaching math)! She invented this notation for herself; then I explained negative numbers to her.

Sometimes only positive numbers make sense, and for some problems “no solution” is the correct answer. But sometimes we can get past this barrier:

We’ve put an IOU in the bank: 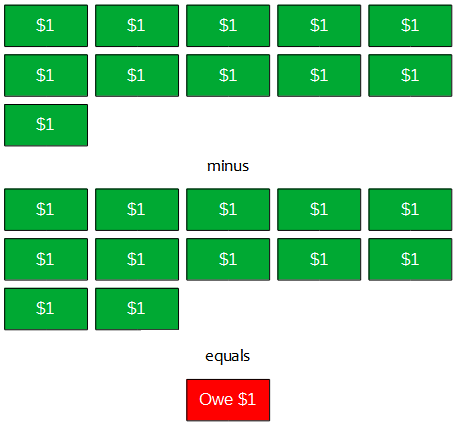 This will “cancel out” the next dollar put into it:

For a similar way to think about “negative apples”, see Picturing Negative Numbers.

This idea actually arose before the modern use of symbols; they would have written \(-1\) as “m.1”. The point is that they had a concept of negative numbers. 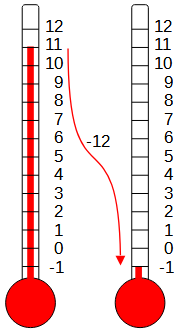 We’ll see this example a lot; rather than counting negative objects, we are measuring positions along a line that goes in both directions, which makes more sense.

We’ve seen a lot of people confuse the concepts of “integer” and “signed number”, presumably because of the way they are often introduced together in school. Integers can be positive or negative, but the primary meaning of the word is “whole“: They don’t include fractions. But even fractions can have signs. For more, see What is an Integer?

All of these are measurements along a line, up and down or left and right.

For a fuller discussion of this, see 2020 and the Y0K Problem.

Here is an actual example:

This is probably a wise decision on the part of the Internal Revenue Service, since many people would make mistakes with negative numbers.

He first reduces an equation (linear or quadratic) to one of six standard forms:

Don’t let the IRS get its hands on the quadratic formula!

I answered, starting with the history:

The “equal rights” idea means that until then, negative numbers were not considered valid answers, just a trick to use in the middle of a problem. We’ll be seeing that this idea continued long beyond Cardan (1500’s).

The Hindu mathematician Brahmagupta (600s) solved at least the first form; later authors such as Bhaskara (1100s) did allow negative coefficients and even (to some extent) negative solutions. Uniting all these forms into one meant there could be one method, and one quadratic formula.

Imagine having to fit everything you are working with into one quadrant of the coordinate plane!

But Fahrenheit’s scale, in which 0 was the lowest temperature they could achieve in the lab using salt and ice mixtures, was just as reasonable as the IRS decision to use only positive numbers.

A world of its own

I answered this one:

That is, when we apply math, we are “mapping” the problem into abstract models that match the way the real world works only up to a point. Then we “map” our answer back into a world where some answers just mean “can’t do it”.

So sometimes positive and negative mean “gained” vs. “lost”, and other times negative money means you did something wrong.

This book was Augustus DeMorgan’s Elements of Algebra (1837), which you can read here:

After 20 pages of explaining how to “correct” “impossible” operations, he says,

We don’t follow his line of thinking today (if anyone else ever did); but he demonstrates that negative numbers work so well that even if you don’t consider them real, it makes sense to pretend they are! The idea of seeing signed numbers as an abstract concept independent of (though related to) the real world, has rescued us from this.

1 thought on “How Real Are Negative Numbers?”