Many students study trigonometry, but few get to spherical trigonometry, the study of angles and distances on a sphere. This is particularly useful in dealing with measurements on the earth (though it is not a perfect sphere). In this series, we will derive and use three different formulas for the distance between points identified by their latitude and longitude: the cosine formula, the haversine formula, and a planar approximation. Of these, the first is easiest to explain, the second is most accurate, and the third is easiest to use, when appropriate.

We’ll start with a question from Clarence in 1995:

Here is what we are talking about, where I’ve used α for the latitudes, β for the longitudes, and δ for the angle between the two vectors: 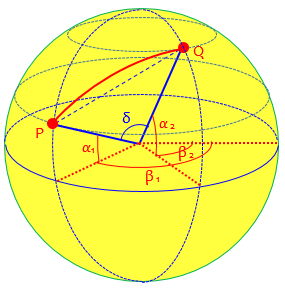 As we’ll see later, latitude is not quite the same as the angle we normally use in spherical coordinates mathematically.

Here is that great circle through P and Q: 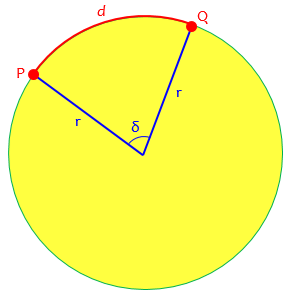 Google says it’s 5560 miles, which is close enough considering we don’t know where Google is measuring between, and the earth isn’t exactly spherical.

Two years later (probably as a result of comments from users), he added a note:

I used a calculator in degree mode for my calculations above; I’d have to convert to radians to use Excel or other kinds of programming.

Such a formula has to take into account all the details of the actual shape of the earth, and is well beyond our scope. For an introduction, see here.

Another four years later (1999) we got this question from Nat, which was added into the same page:

The “simplest formula” is the next one we’ll be seeing, which was already available at that time (and identical to Nat’s); and the “most reliable” is the one we’ll see next week, which was explained by Doctor Rick in 2001.

Direct derivation of the simpler form

A similar question arrived in 1996, before Nat’s question above, and presumably referring to the first (1995) answer we looked at:

There are several possible mistakes Jonathan could have made; I struggled to get correct answers for my example, even though I knew when to use degrees or radians, and similar details! If this question came today, I would start by asking to see his work, so I could find the problem. But this was before that was easy to do.

Here is our picture labeled his way, including the coordinate axes he’ll describe in a moment: 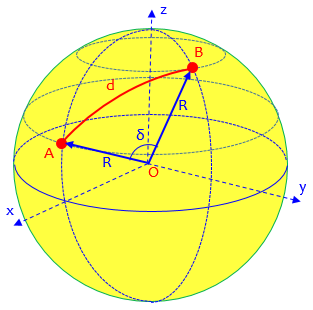 Observe that he has rotated the coordinate system as described in the last comment in the previous answer.

It doesn’t matter which directions you take as positive and negative, as long as you are consistent. He is using a slightly different radius for the earth, as many different values can be found depending on how it is measured.

Just for fun, I went to WolframAlpha and asked it “distance from 56 degrees west 33 degrees south, to 12 degrees east and 40 degrees north”. Here is its response:

There are several good reasons for the difference, including the non-sphericity of the earth.

His phi (\(\phi\)) and theta (\(\theta\)) are the standard angles in spherical coordinates as used by mathematicians.

In 1998, reader Tom asked about this apparent error:

The difference appears to be the interchanging of an addition and a multiplication. A typo?

In fact, Doctor Rob’s version amounts to the Spherical Law of Cosines for Sides, as applied to this spherical triangle: 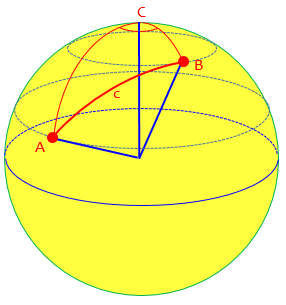 1 thought on “Distances on Earth 1: The Cosine Formula”