Having covered the basics of defining and adding vectors, multiplying by scalars and finding unit vectors, it’s time to look at multiplying vectors together. What makes this entirely unlike working with numbers is that there are two ways (in fact, more than two!) to multiply two vectors. We’ll look at one of those today, the “dot product”, whose result is not a vector but a scalar (so that it is also called the “scalar product”, or sometimes the “inner product”). We’ll see two different definitions, and several different proofs of the key relationship, emphasizing different details.

What is it? A choice of definitions

We’ve had a number of questions about what the dot product is, and have given almost contradictory answers, because it can be defined in two different ways. I’m going to try to put them together to make a coherent whole. Here is our first question, from 1998:

Paul has been taught that the dot product of two vectors u and v is the product of their magnitudes and the cosine of the angle between them. To him, evidently, this doesn’t seem tangible enough, or important enough, to be its essence. What is it, really?

There are two fundamental facts about the dot product, either of which can be taken as its definition:

where \(\theta\) is the angle between them, and

So from Doctor Anthony’s perspective, what the dot product is, is just a simple way to combine the components of two vectors, and nothing more, in itself. The component-wise definition is more fundamental to him; it is a not-unreasonable thing to try doing to two vectors. This then happens to have some implications that make it useful. Perhaps the most visual of these relates to the component (or projection) of one vector in the direction of another. In particular, if \(\mathbf{u}\) is a unit vector, then \(\mathbf{v}\cdot\mathbf{u}\) is the length of the projection of \(\mathbf{v}\) on \(\mathbf{u}\): 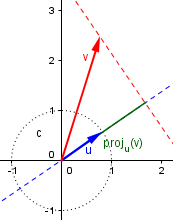 Therefore, the dot product \(\mathbf{v}\cdot\mathbf{w}\) can be thought of as the length of one, times the length of the projection of the other on it: 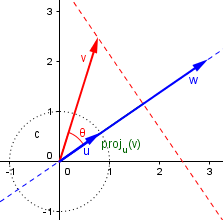 Or we could say that the dot product is the projection of either unit vector on the other, multiplied by both lengths. This, in my mind, is the answer to Paul’s central question. But Doctor Anthony is right that this is not something whose importance would be initially obvious, leading one to make this definition.

It is the usefulness of the dot product, not what it represents in itself, that makes it worth defining. Because of the close connection of the dot product to the angle between vectors, many calculations that would involve complicated trigonometry can be done quickly by vectors.

So what is the dot product? A simple tool that has powerful applications. It can be hard to picture, but its power comes from something deeper. (By the way, have you ever tried to explain what multiplication of numbers really is, when you are not just working with whole numbers? It can get complicated!)

But where does that formula come from?

That answer begged the question of how the two “definitions” of the dot product, using components and using the angle, manage to come together. Later in 1998, we got this question:

This assumes that the dot product has first been defined, presumably as the sum-of-products-of-components that Doctor Anthony started with, so that then a theorem can express it in a different form. Evidently it was presented in class just as an assertion, without a proof. Doctor Rick answered: 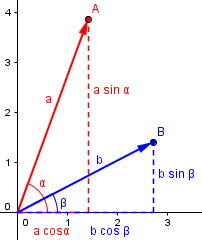 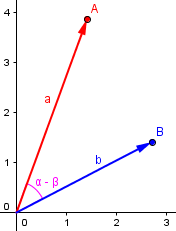 So we started from the definition of the dot product as a sum of products of components (in two dimensions), and proved the cosine formula. This would have been harder to do in three dimensions, where a different approach would be needed.

… or maybe it’s just a definition

There was a delay in that answer, and in between, Bryan had asked the same question just a little differently, indicating that the context was in fact three dimensions:

The Law of Cosines is indeed a good idea; hold that thought!

Doctor Anthony answered, sort of reversing what he’d said in his previous answer:

This, of course, is the reverse approach from what we’ve said so far: If you define the dot product in terms of the angle, then you have to prove the component-wise form from that. The important thing is that both characterizations of the dot product can be shown to be equivalent. So let’s do that next.

A couple months later, we had another similar question, to which we gave another two answers:

The context suggests that this is another question about three dimensional vectors, but we’ll still be holding off on that. Note that Nick clearly has defined the dot product based on components, and treats this as a theorem; but he’s written it with the trigonometric form on the left.

Doctor Schwa replied first, with an approach that starts with the trig:

Like Doctor Rick, he is going to work only in two dimensions; in effect, this will be the same proof approached in reverse. He starts with the angle-difference identity, as Doctor Rick ended with it:

So he has explicitly stated the important point: either can be taken as the definition; the goal is to prove that they are equivalent. He explicitly starts with the trig definition and derives the component form from it:

I’ve added some labels to his diagram, and called the angle t, to make it easier to follow.

You should be able to see how this is the same as our previous proofs, just given a different twist.

I haven’t found a nice way to extend this method of proof to three dimensions; when we have been asked about that comment, we have generally offered the method given in the next answer, which extends easily to that case. It is possible that the extension of the angle-difference method requires more advanced knowledge of either vectors or geometry than I want to assume. (If anyone finds a clear way to do it, let me know!) So let’s finish with the most powerful proof:

A proof using the Law of Cosines

I’m not sure what Sheri means by “the identity function”; she may mean the angle-sum identity used in all our answers so far! If so, she got something different. Doctor Jerry replied:

Many people, when they first see the formula for the dot product, recognize its similarity to the Law of Cosines, so this is a natural thing to try.

This is easy to extend to three dimensions:

3 thoughts on “Multiplying Vectors I: The Scalar Product”