We’re looking at the concept of vectors at an introductory level. Last week we looked at how they are defined in this context (as quantities with magnitude and direction), and how they are added (which is really part of the definition). Our collection of answers from Ask Dr. Math this time focuses on the ideas of unit vectors, components, and “direction cosines”, which are all ways to describe the direction of a vector.

A unit vector is one whose length (magnitude) is 1; collinear vectors lie along the same line (so they can go in the same or opposite directions). Doctor Ian answered:

Here are his three vectors, showing that they all have length 1: 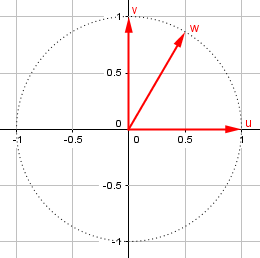 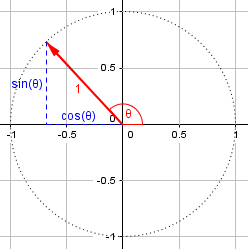 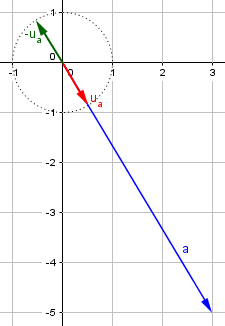 This 1998 question is from a student whose goals are far beyond the basics, but who needs help starting:

Doctor Anthony answered, giving the basic definition for vectors that we discussed last time, because it is applicable (with some little modifications) to physics:

But we can do much more by picking a standard set of unit vectors to use as a “basis” for describing any vector at all:

I’ll stick to two dimensions here. The unit basis vectors i and j are the same as u and v that we used in the first illustration above: 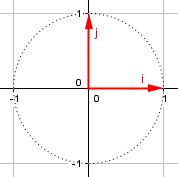 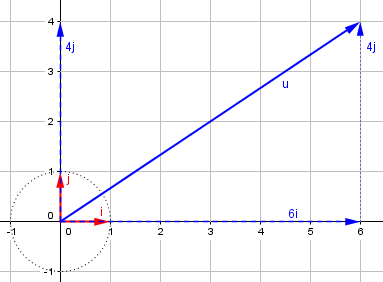 The next question, from 1998, involves vectors whose direction is expressed as the angle from the positive x-axis:

Here we have two vectors being added, and one of them and the sum are described in terms of magnitude and direction. We want to find vector n, both in terms of components and of direction (angle) and magnitude: 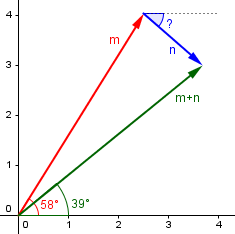 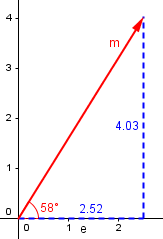 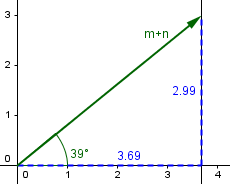 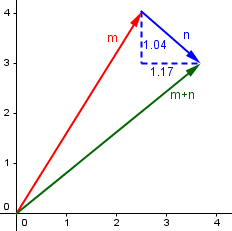 That’s the answer to part (a). 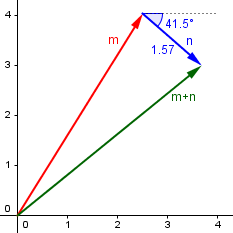 Direction of a line (3 dimensions)

This 1997 question hopes for a way to indicate the direction of a 3-dimensional vector similar to the angle or slope in the previous type of problem:

Doctor Rob answered, first talking about planes rather than lines:

But the question was about a line, and the “direction cosines” just mentioned for the unit normal vector show up here, too:

We could say, however, that the triple ratio a : b : c is a reasonable analogue of the slope of a line, even though it is not a number; the direction cosines, as we’ll see below, are just the components of the unit vector in the direction of the line.

Direction cosines of a vector

For a fuller picture of direction cosines, we’ll close with this question from 2003:

Doctor Ian answered, using a concept we’ll be getting to next week, the dot product: 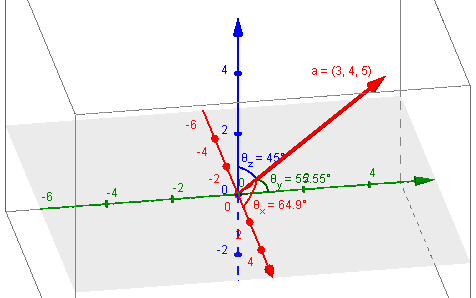 Next week, we’ll look at ways to multiply two vectors.