Because we have had a number of questions about vectors recently, I thought it might be time to look at various facets of that topic. Here, we will start with some ideas about what vectors, and their most basic operations, are. Next week, we’ll get into the far more interesting topic of multiplying vectors.

What is a vector?

We can start with this question from 2002:

Patrick was only 10, so a fairly simple answer was appropriate. I answered:

We’ll look at a more advanced view below. But here we need the basics.

One dimension: vectors on a line

We can think of a vector in this sense as representing a motion. The vector (3) means “moving 3 units to the right”, regardless of where you start. And addition of vectors just means making one motion after another.

Two dimensions: vectors on a plane

Here is that picture, slightly improved:

In three dimensions, we can still use components, like \((a, b, c)\), and we still add vectors by putting them end-to-end.

Second, in addition to being able to add vectors, we can multiply a vector by a number (called a scalar to distinguish it from vectors) in the obvious way: Doubling a vector would mean adding it to itself, doubling each component, and generally $$k\mathbf{u} = k(a,b) = (ka,kb)$$

At a (much) higher level, this basic picture of vectors expands into the more abstract concept of “vector spaces”, just as numbers expand from what you learn in kindergarten (1, 2, 3) into real numbers and beyond. Here is a question from a month after the last question, asking how this fits with the elementary definition:

Now we need to examine further how vectors are combined. Here is a question from 2010:

The fact is, the magnitude of the sum can’t equal the sum of the magnitudes, so David has misunderstood something. Doctor Ian answered: 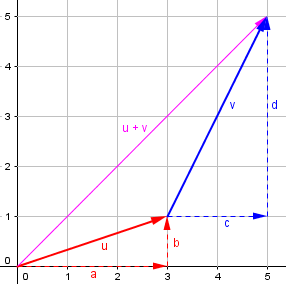 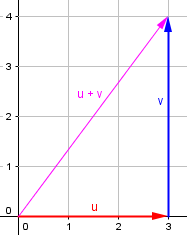 My guess is that David’s difficulty was largely in confusing “the magnitude of the combination” with “the sum of the magnitudes”.

Finally, here is a 1996 question about sums of vectors:

Note that what this (anonymous) parent says is missing a word: It is the magnitudes, not the vectors themselves, that are involved in the inequality. The symbolic form makes this clear.

If we walk the 4 miles in the same direction we walked the first 3, the total distance is 7: 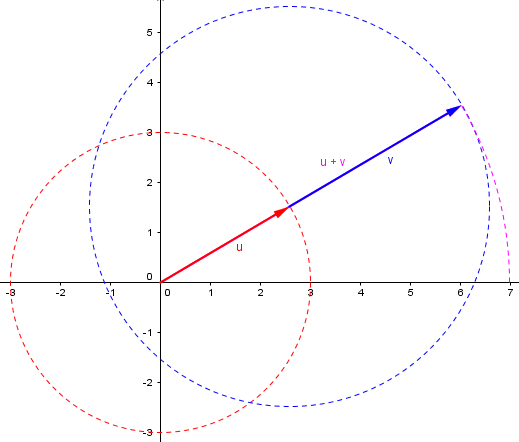 If we walk the 4 miles in the opposite direction, we end up 1 mile from the start: 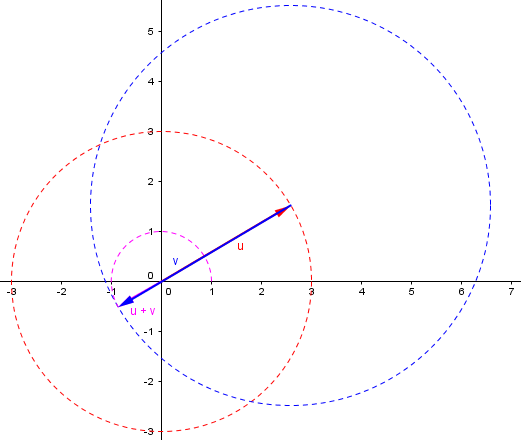 And we can end up any distance in between, such as 6 miles: 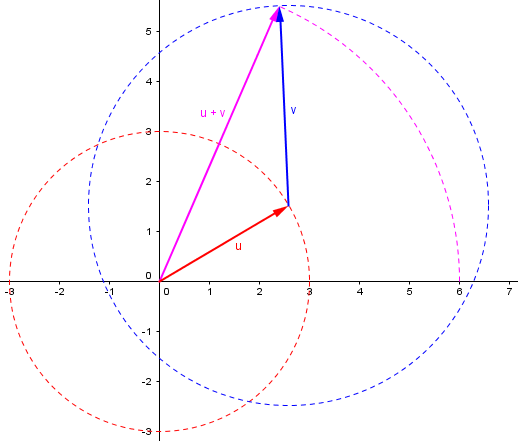 This is called the triangle inequality because it is true of any triangle; each side is no longer than the sum of the lengths of the other two sides. Or, stated differently, a straight line is the shortest distance between two points.