A new question of the week

We haven’t done much with vectors here, though there have been many problems of that sort lately. Let’s look at a recent question that touches on the basics, yet is by no means a simple problem.

This came from Stefan in March:

Determine the angle between vectors a and b if

I don’t really know how to start.

Stefan knows the key formula to be used to find the angle between vectors, using their dot product, and just needs some help getting to the point of using it. If you are not familiar with the dot product, I plan to have a post on that soon!

Expand each equation, and see what you can determine about a • b.

If I did my work correctly, you will find that the answer is numerically unpleasant, but the work is conceptually straightforward.

If you need more help, be sure to show your work as far as you get, so I can check it and make any appropriate suggestions for a next step or a correction.

In my answer I demonstrated a better way to represent vectors and their operations in typing; with two different multiplication operations on vectors, the symbol “*” can be ambiguous, but since our site (though not the best in handling math) provides a way to insert special symbols, it is not too hard to use the dot for the dot product. To represent vectors, we can use either the arrow, \(\vec{a}\), or bold,\(\mathbf{a}\). The latter is easier to just type, so I’ll be using that.

But I’d carried out the work (which I don’t always do initially), and found the answer to be an ugly radical expression; I wanted to mention that as an encouragement, as it might lead to unnecessary doubt.

Hi, Doctor Peterson. Thank you for responding so fast.

So this is what I did:

So if it’s right then great, but is it?

But the work, while partly correct, suggests that he is not paying enough attention to the fact that a and b are vectors. This is a natural mistake when one is first learning about vectors, as the notation looks mostly like ordinary algebra with numbers (scalars). I replied,

The trouble is that you are not clearly distinguishing between vectors and scalars, so some of what you did makes no sense. (You can’t divide vectors.) Also, there is no reason to imagine that your “a/b”, even if it meant something, would be the cosine of the angle between them, is there?

What you really have is this, where I have put vectors in bold, indicated the dot product explicitly (which is necessary), and made the magnitude of a vector explicit as |a|, using the fact that a•a = |a|2:

I would not rush to set these equal to one another, which loses the important information that not only are they equal, but they are both zero. I would first simplify each equation. Note that you can then solve each of them for a•b in terms of |a| and |b|, if you find that useful. Or (big hint) you could eliminate a•b between them.

But what you did up to that point will be useful, because your goal is to find a•b/(|a||b|), which is rather close to what you have. If you can only find how |a| and |b| are related …

The equation he got can be used to express \(\mathbf{a}\cdot \mathbf{b}\) (and therefore the angle) in terms of the magnitudes of a and b, but we need more to get an actual value.

Stefan replied, taking my hint by solving the first equation for \(\mathbf{a}\cdot \mathbf{b}\) and putting it into the second:

So I guess to find the relationship I would have to do this:

now insert that into

This is the only thing i can think of, sorry, my monkey brain is slow when it comes to math.

Cleaning up the details

I think you’ve got a pretty good “monkey brain”! You thought of almost exactly the right thing!

You just made two little slips: You miscopied 67 as 62, and messed up the final step.

Fix that, then get a decimal value for the cosine, take the inverse cosine, and you’ll have the answer!

Now, I took a slightly different path that led to a slightly more complicated expression, (91/134)√(67/112), which turns out to be equivalent to yours (after correction). Your method is a little nicer than mine, and we both missed some simplification of the fractions, which would have made the similarity more obvious.

So it’s almost right, besides the miscopied numbers.

I’m not sure what you meant by messing up the final step?

I know that cosθ doesn’t equal to the angle but arccos (or cos-1, I’m not sure if there is a difference?) but I just wrote it that way.

I answered, explaining the subtle error in the last step, and finishing:

You didn’t flip the radical over. This simplifies (though this is not needed) to

(You are correct that arccos and cos-1 are two ways to say what we are doing here.)

I have attached a picture of a pair of vectors a and b that satisfy this, with the correct angle and ratio of magnitudes. This is how I verified that my answer was correct! 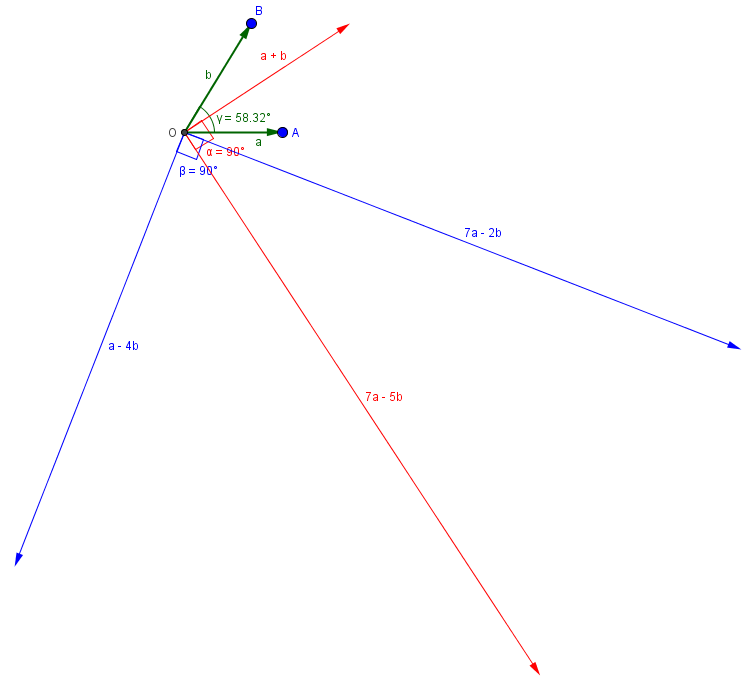 The desired vectors a and b are in green, and the two pairs of perpendicular resultants are in red and blue, respectively. Once I arbitrarily created vector a, vector b was determined by the angle \(\cos^{-1}\left(\frac{13}{8}\sqrt\frac{7}{67}\right)\) (which could have been in either direction) and the magnitude, \(4\sqrt\frac{7}{67}\) times that of a.

Ah, I see, that was a stupid mistake…

Thanks for helping me with this, I appreciate it greatly!

We all do that!

That’s why I teach my students that checking your work, as well as your answer, is half the work. (And I manage to demonstrate that at least once a lesson, by making mistakes for them to catch!)

And thanks for asking the question, which was an interesting challenge.

While preparing for an upcoming series on vectors, I ran across this 2006 problem, which is quite similar in some respects:

As above, we can use the dot product to relate the various magnitudes:

And, as above, we can distribute the dot products to make usable equations:

This turns the equation we had into something we can actually solve (I’ll correct a small error in the original):

Again, for confirmation, I’ve constructed these vectors in GeoGebra, though it’s hard to see: