I’ll finish this series on place value and writing numbers, with a question that’s not quite as simple as you might think: why we use commas and decimal points as we do. Americans may be surprised at some of the answers – and some of the questions.

Commas are just a convenience

If “myrion” existed, it would mean a hundred million.

A couple months earlier we had this very similar question:

Doctor Floor (that’s his first name) answered, from a very different perspective than mine. But he started out the same:

Again, the commas agree with the language; and if there were more digits per group, they would be more awkward to work with. But:

The decimal point varies, too

The obvious next question is, “Why?” This is from 2007, referring to the decimal point vs. decimal comma (or, more generally, decimal separator or “separatrix”):

This is not only in writing about money, of course. I answered:

The next question is from 2003 (before I wrote the answer above – I had probably forgotten it):

Here is what my current Windows 10 computer shows under Region > Additional Settings when I select Dutch (Netherlands) as for Doctor Floor: 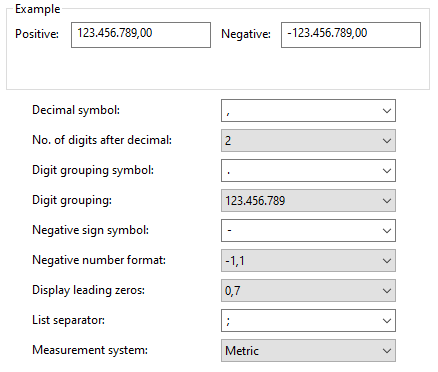 We see the comma for the “decimal symbol”, and dot for “digit grouping symbol”. Here is English (Sweden): 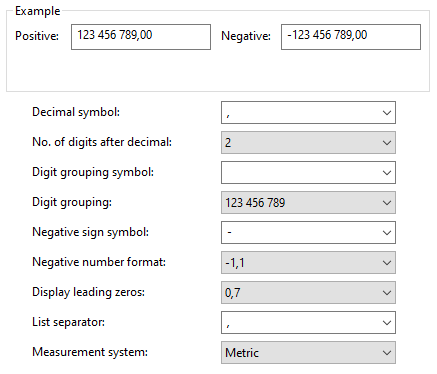 There they use a space for digit grouping.

Now, we would just look it up in Wikipedia, here!

This agrees with what we heard. (That link still works; none of those that follow do.)

Technology sometimes forces a convention on people (e.g. calculators with “.” on a button, even when they’d naturally use a comma).

The following is a favorite site of  mine, which I hadn’t realized until now had gone away:

Since SI is meant to be international, they have to standardize as much as possible. So they allow either comma or dot for the decimal separator, but spaces for thousands, so that there is never a possibility of confusion.

Then there are technical specifications for “regionalization” of software, much as we saw in Windows settings:

After those quotations, I added:

Why divide digits into threes?

Getting back to commas, why do we use the grouping we do? This is from 2003:

If you’re unfamiliar with this use of the word “period”, it refers to each set of three digits separated by commas. In the “short word form” we’ve seen, “x millions, y thousands, z ones”, the x, y, and z are the periods, while “millions”, “thousands”, and “ones” are their names. In effect, they are the “digits” in a “base 1000” number.

If there is a mathematical reason, it’s as I said above, that we are working  in “base 1000”, which provides a consistent format, a useful regularity.

We’ll be looking at that page in a moment. For the moment, notice that this is irregular, so its only value is to match the words they use, rather than anything mathematical.

This is an interesting thought. It is ultimately only the desire for regularity, and the fact that we think of “x hundred yty-z” as a single number, that saves us from writing 1,23,4,56 for “one hundred, twenty-three thousand, four hundred, fifty-six”. Those extra commas would mess things up a little.

Here is the question I referred to about India, from 2000:

Interestingly, Windows does not show lakh-and-crore commas (by default) for Urdu; in Pakistan it shows essentially American style, and in India it shows the same but with Arabic digits (and either left-to-right or right-to-left): 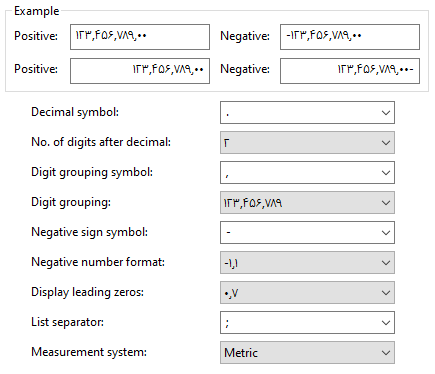 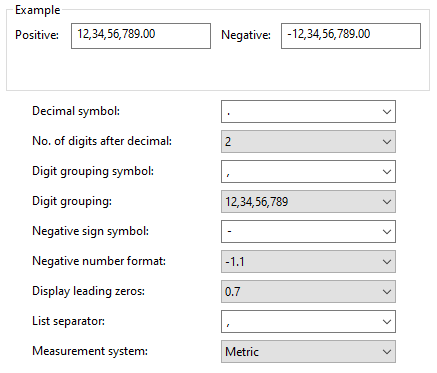 In 2003 I added this (in my response to a reader who pointed out a small error in the quote above, which has been corrected):

Note how confusing it would be to read this in their terms if the commas were put in our places! Of course, if they wrote numbers their way in a question written in English, we would wonder whether there were a typo.

Math is not a universal language!

Let’s look at two quick questions about lakhs and crores that were not archived. First, from 2006:

On one hand, Nitin should not be ashamed of his own culture! But on the other, when writing for international use, we need international standards. I have to admit that I might find it awkward to have to use a different style than I was taught, in order to communicate with colleagues in other countries, as if that made America a second-class country; I would have to think of it as adapting to others. But the same is true of using spaces instead of commas (as the SI specifies, as we saw above), or of  using the metric system rather than feet and inches for use in international markets.