Last week we started a series about finding distances on a sphere (which approximates the shape of the earth), using a straightforward formula from spherical geometry. But in practice, that formula turns out not to be ideal, so a different formula is used when accuracy in all circumstances matters. That is this week’s topic: first to state it, and then to prove it.

Some level of precision is needed, maybe even more than we can get assuming the earth is an exact sphere; we certainly want to do the best we can.

This is an old page from 1997, and not very user-friendly (search for Q5.1)! A somewhat better 2001 version can be found here, and the part with the formulas is here.

This is an issue we’ve dealt with a number of times in recommending formulas in Excel. This function returns the angle in standard position through the point (x, y); it is understandable that Excel would have you enter the coordinates of the point in that order, but it also makes sense to put the arguments in the order (y, x) to make a direct replacement for “atan(y/x)”, the arctangent of the slope. The difference between the two is that atan2 produces an angle in the appropriate quadrant, as atan can’t.

What follows was copied in condensed form from the source (which differed a little from the current version):

The current version does not include this atan2 version of the formula, but only the other version, using an arcsin with “bulletproofing” to prevent errors under special conditions (“nearly antipodal” points); the atan2 version doesn’t need that protection. We’ll look at that later.

Using the wrong units is a very common cause of errors people have written to us about!

A note on earth’s radius

The following comes under the heading “What value should I use for the radius of the Earth, R?” in the GIS FAQ:

Last week we used a different value, 3963 miles. Among the possible values, the two main ones from actual earth measurements are, according to Wikipedia:

Another alternative is the “mean radius” as given by Wikipedia:

What we used last week, 3963 miles, is the equatorial radius, so that those calculations can be expected to be just a little high.

But the FAQ is right not to give as much precision as Wikipedia for the averages, because they are, after all, averages! With about 4 significant digits, it will be reasonable to expect accuracy to within about a mile in 10,000. If we used the average radius to find a length along the equator, we would be about 0.17% low, or 1 mile out of 573, considerably less precise.

What the formula means

We often do more work behind the scenes than we show! And this is not the only time we have wanted an occasion to write up the details of a problem.

Wikipedia has a lot of information about this and a whole family of related functions, in the article on the versine. Jim Wilson has a nice article that also touches on our current topic, here. 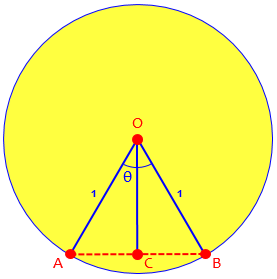 This formula is used often in working with regular polygons.

Chords of the sphere

Here is a somewhat clearer picture: 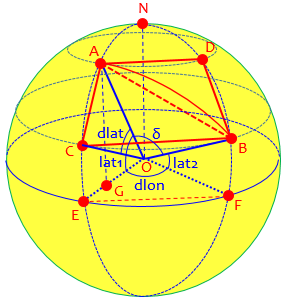 Our goal is the length of arc AB; we’ll be first finding the length of segment AB, then using that to find the angle δ = AOB and finally the arc.

Diagonal of a trapezoid

Now we have the lengths of all the sides of (planar) trapezoid ADBC. The straight-line distance AB (passing through the earth) is a diagonal of that isosceles trapezoid.

This is part of the formula we are trying to prove; it appears that this intermediate value a was chosen partly to eliminate the 4, and partly, as we’ll see in a moment, because half the chord is what we need anyway!

All that’s left for the formula is to multiply this angle (in radians) by the radius R, to get the arc length (great-circle distance). The formula, again, is:

In the FAQ from which we got the formula, the formula is given using a sine instead of the atan2 that we are using. That saves some contortions, as angle AOC is just the arcsin of \(\sqrt{a}\). But then they have to add a check. Here is what they say:

The atan2 function will never have these errors. Instead, in the antipodal case, we will be dividing by a very small number, and might have overflow in a computer.

Comparing the haversine and cosine formulas

The GIS FAQ from which we originally got this formula explicitly warns against using the cosine formula we studied last week. Here is what it says:

In contrast, when we use the haversine formula for small distances, we just take the sine of small angles, and then the inverse sine (or inverse tangent) of a small number, which behaves nicely, being approximately proportional.

So let’s do one example, at a fairly small distance, using both formulas.

We expect the correct distance to be a little less than 2.2 kilometers.

First, I’ll use the cosine formula, which I’ll do in the format used by the GIS FAQ we saw, which breaks it into steps we can examine:

What we see here is that we had to take the inverse cosine of a number very close to 1. When I repeated the calculation on a hand calculator with less precision than the Windows calculator I used initially (which showed many more digits than I have copied), I got the same results (to five decimal places), so the loss of precision was not serious; but in principle, the formula is inadequate – especially if you were using trig tables rather than a modern calculator!

Now I’ll use the haversine formula, again from the FAQ:

The answer is essentially the same; and this, too, worked just as well on a hand calculator (though for a while it looked as if it had lost many digits in calculating a, as it did not display that tiny number in scientific notation, but as 0.000000028).

1 thought on “Distances on Earth 2: The Haversine Formula”