We’ve looked at two formulas for the distance between points given their latitude and longitude; here we’ll examine one more formula, which is valid only for small distances. This is a “flat-earth approximation” to distance.

Hing is apparently thinking that transforming coordinates on earth to \((x,y)\) coordinates on a map will allow reasonably accurate distance calculations on the map; that’s true, but the reality is that there are different map “projections” that might be used on his map, and his formula is not appropriate for a map anyway. We’ll be focusing on a particular projection that is appropriate for short-range distance calculations, rather than dealing with what his existing map might be.

I think Hing’s formula has longitude and latitude swapped; then it gives the x– and y-coordinates, in effect projecting a point onto the plane of the equator (\(z=0\)); in any case, it is not what is needed unless you are at the pole. Here is my interpretation: 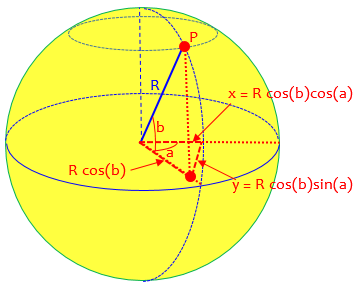 Instead, we want to project points near P onto the tangent plane at P, with axes parallel to the lines of latitude and longitude at P: 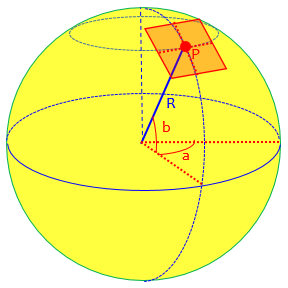 This will represent lines of latitude (“parallels”) as parallel horizontal lines, and vertical distances as arc lengths along lines of longitude. On the common conic projection used for small regions, lines of latitude turn out as circular arcs. We are here inventing the simplest possible local projection.

Lines of longitude will be represented as vertical lines (which on a conic projection would be slanted), and horizontal distances as arc lengths along the line of latitude through the first point, whose radii are \(R\cos(lon_1)\): 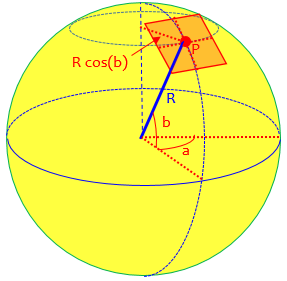 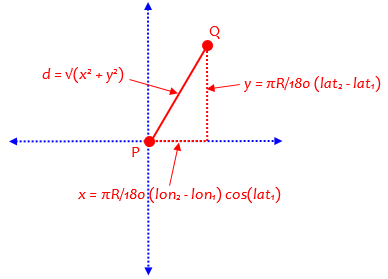 Scaling a map with a local projection 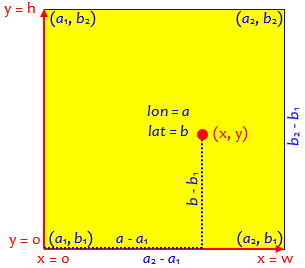 Many “digital maps” use a simple version of the Mercator projection. As a conformal map, this is appropriate for use at small scales, because shapes and angles are preserved. That makes the suggestion here more or less reasonable.

How about a few kilometers?

A 2004 question about that answer was added to the page:

In other words, can we still assume that map is linear (as if the earth were flat) for this larger scale? A square with area 50 square kilometers will have sides approximately the square root of that, namely about 7 by 7 kilometers, less than 5 miles wide and high.

We’ll be looking at this page in a moment.

Of course, the map has to be made correctly in the first place, if we are to correctly locate points within it:

(The radian version in effect assumes a radius of 1, but takes longitude and latitude as in degrees.)

How close is close enough?

Here is the page Doctor Rick referred to for a discussion of errors, from 2003:

One issue on the equator would be the fact that the effective radius along a meridian is different from along the equator; but effects of curvature would be present even on a perfect sphere.

The difficulty of determining when the planar approximation is safe leads to a practical consideration for programming:

The haversine formula is what we looked at last week.

I am omitting a further question about finding the midpoint between two points, which I may post in the future.

It is also possible that the huge number of calculations needed could be reduced by changes at a higher level in the program.

Finding Points on the Earth

He got it, in turn, from a highly-recommended source:

The claim that 20 km is close enough to ignore curvature seems to be true – though it still depends on the accuracy you need.

Jessica had one more question:

This essentially asks for more detail on the original derivation. Doctor Rick answered,

So that’s the radius of the line of latitude.

Since we are using the latitude of the first point, we would get different distances if we swapped the two points!

In preparing last week’s post, I found that the GIS FAQ used as a source there also included a “flat-earth approximation” that was different from Doctor Rick’s; and when I used it for my sample distance between two points in Paris, I got a considerably different answer (2.28 rather than 2.12 km)! I only realized later that they don’t claim that formula applies everywhere. Let’s take a look.

They have not actually stated how to convert to Cartesian coordinates; it is possible that they intended to use something like Doctor Rick’s formula. In any case, they, too, recommend using the haversine formula instead.

Later, they give another formula that is meant only for locations close to the poles, where they pretend that the entire polar region is flat, and apply the Law of Cosines to a triangle with one vertex at the pole: 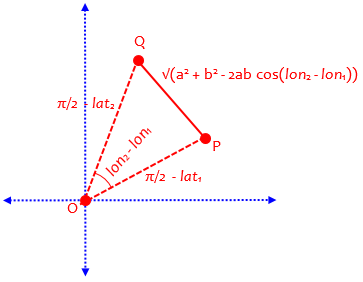