We’ve been looking at dissection puzzles, where we cut an object into pieces, and rearrange them. Here we’ll examine a mystery posed by two different puzzles, each of which seems to change the area by rearranging the pieces. The answer combines the marvelous Fibonacci numbers and [spoiler alert!] how easily we misjudge areas.

A puzzle that shouldn’t work

The picture is hard to decipher if you are not already familiar with the puzzle. I’ll redraw it to look like our puzzles from last week, starting with the goal, which looks like this:

Can we dissect the square and cover the rectangle with the pieces? Of course not; The areas are 64 and 65 respectively. But we’ve been told we can do it this way:

It looks good! But is it? (Hint: I cheated a little in my drawing.)

(I’ve updated the link, which has been moved slightly in the intervening 20 years. And the wooden puzzle has moved from my in-laws’ home to mine.)

We’ll be looking at both slope and area calculations below.

We got a similar question in 2001, but without the actual pieces:

The misalignment would involve the slopes we discussed.

Like my drawing, this picture cheats a little, making ABCD look collinear:

Here are more accurate pictures, close up, to show that parallelogram: 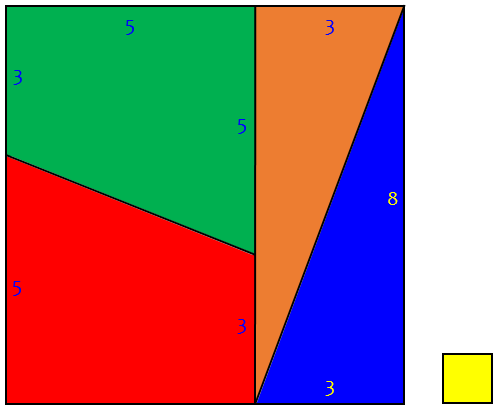 The yellow 1×1 square has the same area as the yellow parallelogram in the middle of the rectangle, as hard as that is to believe! Here is an exaggerated view of it:

Rather than slopes, we can also use lengths (via the Pythagorean theorem):

If C were on segment AD, then we would expect that AC + CD = AD. That fact that it is greater implies, by the triangle inequality, that ACD is a triangle.

A similar but different puzzle was sent to us in 2002:

The site no longer exists, so I have removed the link. Several others have asked about the same puzzle by sending us a link to an image file called “bizare.gif” [sic] at various sites, and none of those still exist either. But the problem is mentioned on the R. Knott site referred to above, as Yet Another Fibonacci Jigsaw Puzzle. Here is the image from that page:

It appears that by rearranging the same four pieces they get an identical triangle, but with room for an extra square! Observing that the triangle has legs 8 and 13, which are divided up into parts of 2, 3, and 5, you might wonder if this, too, involves Fibonacci numbers. You’d be right! And the basic trick is similar. Can you spot it?

If the triangles are not similar, then their slopes will be different, and the top edge of each figure will not be a straight line. The thickness of the black line contributes to covering this up; it’s drawn as a straight line but doesn’t actually pass through the vertices of the triangles.

These tangents of angles could just as well be described as slopes.

Here are accurate versions of the two pictures; the dotted lines are the true hypotenuse:

Another Math Doctor has suggested cutting the two figures, carefully drawn, from graph paper, and putting one on top of the other to compare more easily.

Doctor Ian simultaneously added his own ideas, filling in the proof:

Later that year, we got a comment from a reader, Michael:

So the area of the triangle we think we see is the average of the two non-triangles that are actually there; and the difference between the two is that one extra square.

Let’s take a little look at why Fibonacci numbers work so well in these puzzles, in addition to the fact mentioned earlier that those dimensions result in similar slopes.

In 2002 we got this variation on the question, which wasn’t archived:

Proving it by an explicit formula

This fact was the subject of a question in 1999:

Doctor Anthony answered, using a known formula for the nth Fibonacci number in terms of the Golden Ratio φ:

The numbers \(P\) and \(-Q\) are, respectively, the numbers \(\Phi\) and \(\phi\) we mentioned above. We’ll be looking at some aspects of the Fibonacci sequence soon, if this mystifies you!

We need to show that the difference between these is always \(\pm 1\).

The same fact was the subject of a question in 2001, without reference to the puzzle:

We’ll be looking at inductive proofs soon. Here he has shown that if the claim is true for some given value of n, as it is for n = 0, then it is true for the next, and therefore for all subsequent values.