Last week’s exploration of a problem involving the Fibonacci sequence, has led me to delve into that and related concepts. In order to say much about the Fibonacci numbers, we have to first explore the concept of proof by mathematical induction. We’ll introduce it here, and then dig deeper next time.

Knocking down all the dominoes

We’ll start with this basic question from 1998:

It’s easier to understand the idea with an example. Let’s look at a very simple one from 1997:

Induction is not applicable when the variable is a real number. But it’s possible for n to start at 0 or any other particular integer.

You’ll note that Doctor Sydney has the three steps I mentioned, and also that the inductive hypothesis step (stating that the kth case is true) is not merely a restatement of the problem, because the problem to be proved is that a statement about n is true for all n, while this is about any specific number k.

The proof has set up these dominoes, and given the first one a push:

This proof, of course, was just for practice; we don’t need induction to prove such an obvious fact. But most such proofs are considerably more interesting, as we’ll see next week.

Assuming what we want to prove?

A good way to understand a concept better is to try to defend it against attack. Here is a question from 1998, presumably reflecting a statement the student was assigned to respond to:

In a proof, you can’t just assume that you are right. So why is it okay to assume the kth case is true?

We can’t just assume that any one case is true; but we are not doing that. We are proving one case, and then proving the other cases follow from it.

In this example, we have proved the last (inductive) step, but never proved a base case, so the inductive step has no ground to stand on. It may be true that B follows from A, but if A is not true, then we have accomplished nothing. But if A is true, then we will know that B is true.

There are several classic fallacious “proofs” using induction. One, which is referred to in the Ask Dr. Math FAQ page on False Proofs, claims to prove that all people in Canada are the same age. This one is subtle, because rather than being due to failure of the base case, it comes from the chain being broken elsewhere.

Here is a long question from 2012 making a stronger argument against induction, which I’ll take in pieces:

Neither of these is worded very well. In his notation, \(A_r\) is the general proposition to be proved for any value of variable r; \(A_1\) is the base case, where the variable r is 1, \(A_{r+1}\) is the next case. The statement “\(A_r\) holds true for \(A_{r+1}\)” suggests that Brandon is a little confused about the notation. Subsequently he will use “n” and “a” in place of r without explanation. So a major goal will be to clarify what the symbols mean.

Brandon is using \(A_r\) to represent both a statement that can be true, and an expression that has a numerical value. He is also failing to distinguish between all n and a specific r. These confusions are probably both common among students!

What we have is a sequence of propositions, and our goal is to prove that they are all true. Since each is a separate proposition, we may assume one of them true in proving the next.

You might think of our proof as writing a computer program that will carry out the 1,000,000 little proofs needed to get to P(1,000,000). Once we write the program, we know it can, in principle, keep proving as far as we choose.

We might think of the base case as the floor, which we establish on its own; then each step is supported by the step below it. The blueprint here corresponds to the program I suggested earlier. Here is a new image for an inductive proof: 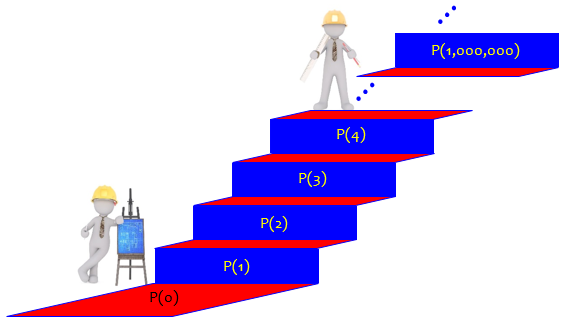 Next week, we’ll look at some deeper examples of inductive proof.

3 thoughts on “What is Mathematical Induction?”