I always like solving advanced problems with basic methods. For example, many problems that we usually think of as “algebra problems” can be solved by creative thinking without algebra; and some “calculus problems” can be solved using only algebra or geometry. Using simple tools for a big job requires more thought than using “the right tool”, but that’s not a bad thing. I want to look at several ways to find tangents to a parabola without using the derivative, the calculus tool that normally handles this task.

Slope of the tangent: Algebra

Here is what Dave has described: 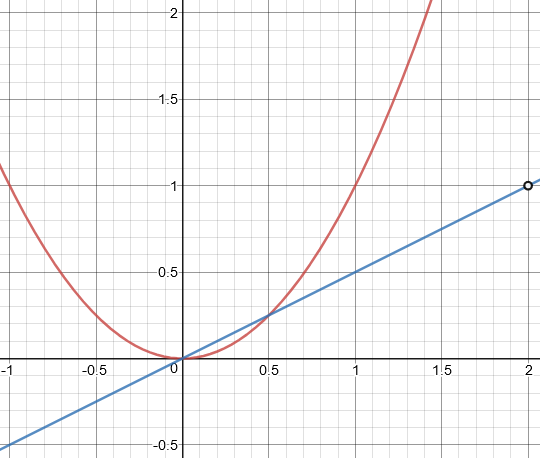 (His line may have looked like a tangent at a different scale,but it clearly isn’t, as it passes through the parabola, crossing it twice.)

For a calculus class, this would be easy (sort of); and maybe in some countries that would be covered in 10th grade. But we can use mere algebra. Doctor Jerry took this:

This is the key to the algebraic method of finding a tangent. We need to find a value of m such that the line will only intersect the parabola once. (If you think about that a bit, you may realize that a vertical line, though not a tangent, would also cross the parabola once. We’ll have to check that idea when we’re finished.)

This is a quadratic equation, which might have 0, 1, or 2 solutions in x. 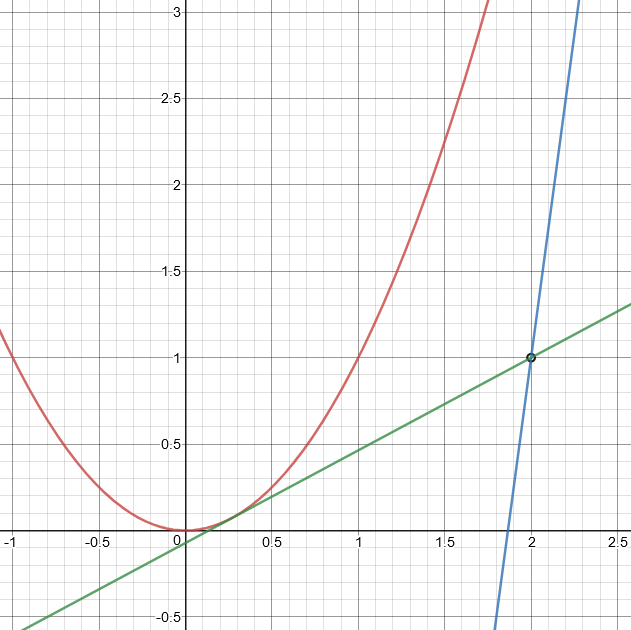 Clearly the green line does what Dave’s line didn’t quite do. If we zoomed out, we’d see that the blue line is also tangent.

How about that vertical line I mentioned? Our work has shown that any line even just slightly off vertical will in fact cross the parabola twice, surprising as that may seem; but it doesn’t deal with a vertical line, for which m would have been infinite (that is, really, undefined). That’s why our work didn’t find that line, which is not tangent to the parabola and might have led to an error.

Slope of the tangent: Circles

Now we can look at a 1998 question about a more advanced method, using analytical geometry: 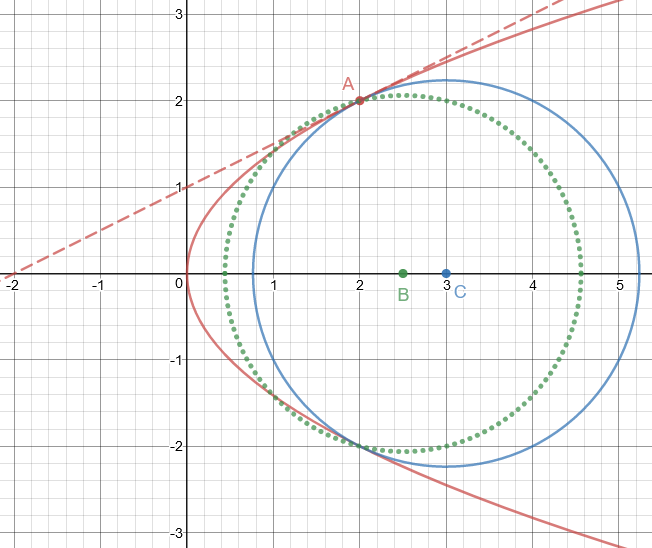 My circles B and C are two members of this family, each one determined by a different value of a.

So here we factored the LHS (which otherwise would have been forbidding) by using the fact that 2 must be a solution, and therefore \(x-2\) must be a factor, and dividing by that factor using polynomial division. (If you doubt it, try multiplying the factors and verify that you get the right polynomial.) But if there is only one solution (that is, one value of x — which will correspond to two points with positive and negative values of y), the two factors have to be the same, so we get our answer. This point C is, as I showed in the graph, \((3, 0)\).

If we hadn’t seen the factoring trick, we could have used the discriminant as in the last problem:

Now we have a circle that is tangent to the parabola. We haven’t yet found the slope of the tangent line. To do that without calculus, we can use the fact that any tangent to a circle is perpendicular to the radius. The radius \(\overline{CA}\) has slope -2; so the slope of our tangent line is the negative reciprocal, 1/2.

Reflection property of the parabola: Geometry

Before there was algebra, there was geometry. The parabola was originally defined geometrically. The following question starts with one of several geometric definitions, and looks not just for the tangent line, but for an important property of it:

The sixth-grader part made this hard, but I did my best! 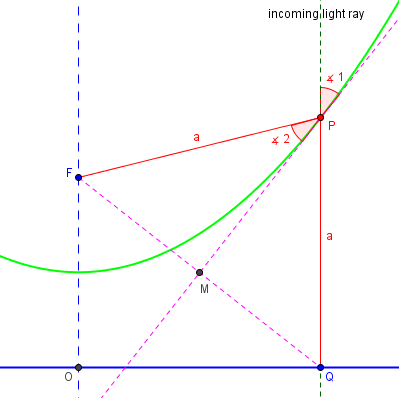 So, if my line PM is the tangent, the reflection property will be true. 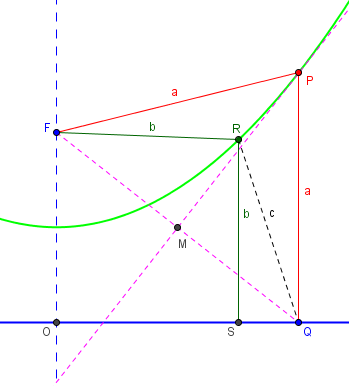 Here is the picture when R is farther out: 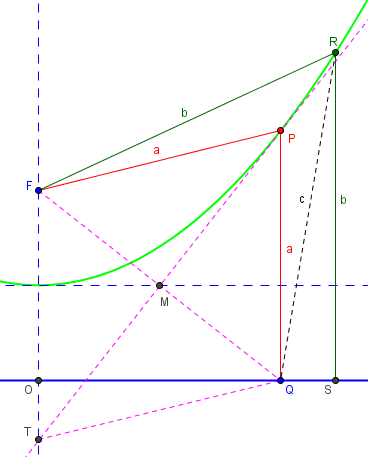 In a geometry class I would have invoked a few specific theorems to make my conclusions here, but I  tried to express everything in fairly obvious terms.

Slope of the tangent: Geometry

Let’s look at one more thing in this diagram: What is the slope of the tangent line? 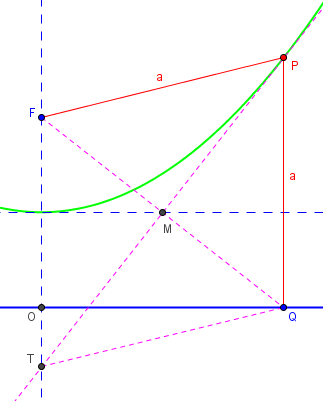 I’ve added in the horizontal line through M, which is midway between the focus F and the directrix OQ; it passes through the vertex of the parabola (making it the x-axis). It is easy to see that if P has coordinates \(\left(x, x^2\right)\), then M has coordinates (\(\left(\frac{x}{2}, 0\right)\). The slope is therefore \(\displaystyle \frac{x^2}{\frac{x}{2}} = 2x\), just as we know from calculus. We can also see that if you ever want to draw a tangent to a parabola at a given point, you just have to make it pass through the point on the x-axis halfway to the given point.

For an alternative demonstration of the reflection property, using calculus and trigonometry, see

2 thoughts on “Tangents Without Calculus”