Having just looked at how to solve oblique triangles, let’s look at a couple “word problems” (applications) involving such triangles. We’ll be using the Law of Sines, and also exploring alternative methods of solution.

Let’s start with this real application from 1999:

Presumably the tree is tilted toward the house, so it would fall in that direction: 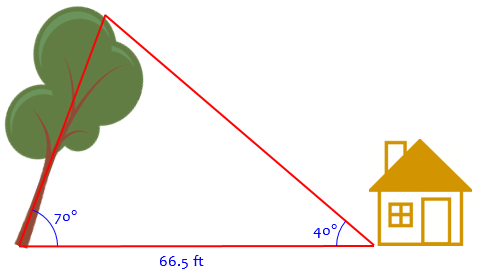 We’ll assume, as in the picture, that the angle to the top of tree was measured from the ground; if it was measured at eye level, say 5 feet up, then the tree would be about 5 feet taller than our calculation: 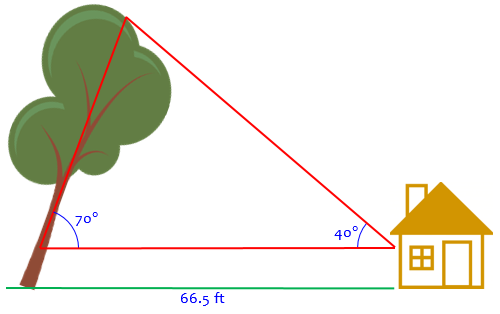 In word problems, we generally don’t worry about real-life details like this, but if this is a real decision that has to be made, then we should.

Doctor Rick answered, with a quick solution, and ignoring my little issue:

Here is the picture, abstracted from the problem itself, labeled, and with the third angle labeled, ready to work on: 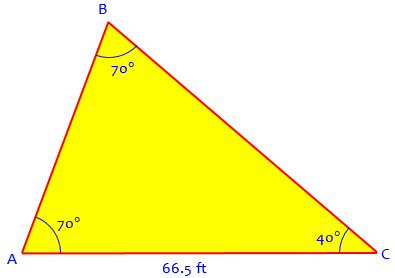 It’s a good idea to look for shortcuts like this that save work. This is also one reason we ask students to tell us the context of their problem, not just the bit they are working on: If Billy had just given us the triangle and asked for the length of side c, we would not have noticed that he didn’t really need that.

Using the Law of Sines

But, of course, it will be interesting to actually find the height of the tree, and that will introduce Billy to some new ideas, so why not!

The comment, “which puts numbers into Euclid’s theorem” is of interest. If you don’t follow that, the idea is that the Law of Sines, in saying that sides are proportional to sines of angles (within a given triangle), tells us in particular that the longest side is opposite the angle with the largest sine. But since the sine is an increasing function (on acute angles), this amounts to a more precise version of Euclid’s theorem that the longest side is opposite the largest angle.

(What about obtuse triangles, you ask? In that case, the longest side is opposite the obtuse angle, and although the sine is a decreasing function for obtuse angles, its sine is still greater than either other angle, because the supplement of the obtuse angle is equal to the sum of the acute angles. But we digress …)

Notice that the 5 feet or so that would be added if the measurement was made at eye level doesn’t affect the conclusion, that the house is safe. This couldn’t have been determined by the inequality method.

But did you notice another special fact about the problem that allows us to solve the problem in a different way?

Since the triangle turns out to be isosceles, we can split it into two congruent right triangles: 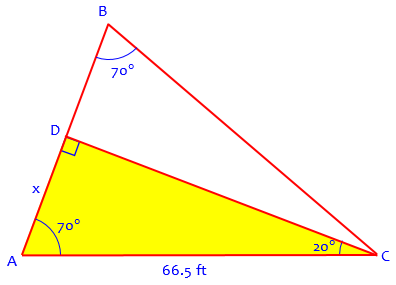 A building on a hill

Here is a more typical classroom problem, from 1995 (a couple months after Ask Dr. Math started):

Picture it like this (the angles are not exact): 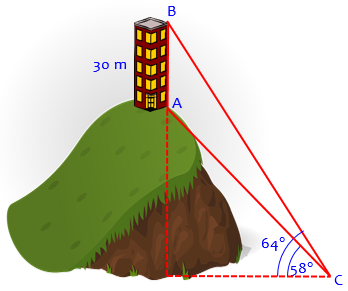 I suspect the problem may have said 58° 4′, meaning 58 degrees, 4 minutes (though that seems like an oddly precise angle in context). We’ll ignore the 4.

Here is a clearer picture keeping all the parts together, and labeling them: 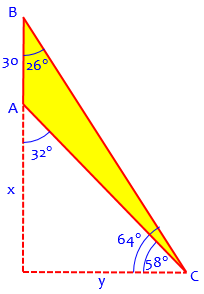 Doctor Margaret’s approach of drawing each triangle separately is an excellent one, after first seeing how all the parts are related in context. It allows us to focus on each triangle alone, abstractly: 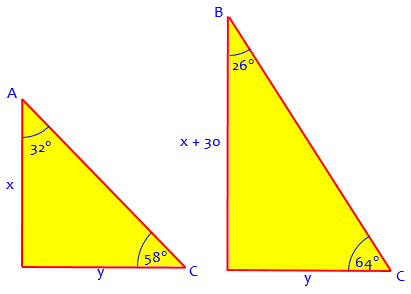 What if we really use the Law of Sines, applying it to our oblique triangle ABC? If we can find either of the diagonal lines (lines of sight), then we can use one of the right triangles we saw above to find the height.

We can do a little subtraction of angles, and we’ll know all three angles and one side: 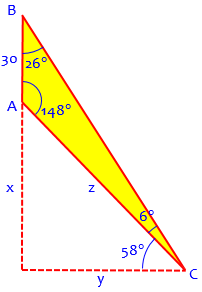 My guess would be that the teacher used the two-right-triangle method without the Law of Sines, but who knows!

Height of an airplane

Let’s do one more, from 2001, which amounts to that last one turned on its side and solving for a different part:

Here is the problem: 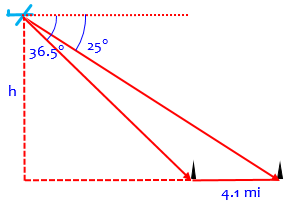 Recall that an “angle of depression” means the angle by which you need to “depress” your vision (look down from the horizontal) to see something. Also, though it says the angles “to the towers”, that must refer to the base of each tower, or we would have to take their height(s) into account.

Here is his picture, again abstracted from the problem and labeled: 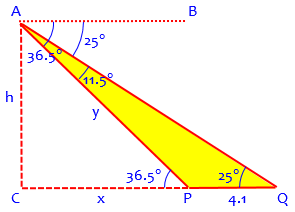 I added in the fact that the angles at P and Q are congruent to the respective angles at A because they are “alternate interior angles” on lines crossing the two parallel lines AB and PQ. I also subtracted to find angle PAQ, which will be important.

He only described the procedure for solving this, using the oblique triangle as above. Let’s finish it:

A similar problem was asked in 2003 without any actual measurements:

I’ll leave it to you, the reader, to try other methods, such as our two-right-triangle approach.

2 thoughts on “Oblique Triangles in Applications”