A recent question asking how to make a sphere out of flat material called for a look at an old question on the same topic, and some new ideas, including thoughts about approximation. And we actually get to see the physical result of our assistance, which is rare!

Here is the question, from last November:

Can anyone teach me how to determine the circumferences of different parallel slices or cross sections of a sphere? Like if you sliced an orange and restacked it — what is the circumference at every point the knife cut through. I know that at one point in school I did learn how to do that, but that was many, many years ago and when I try to look it up all of the results are about volume and surface area, neither of which I want. 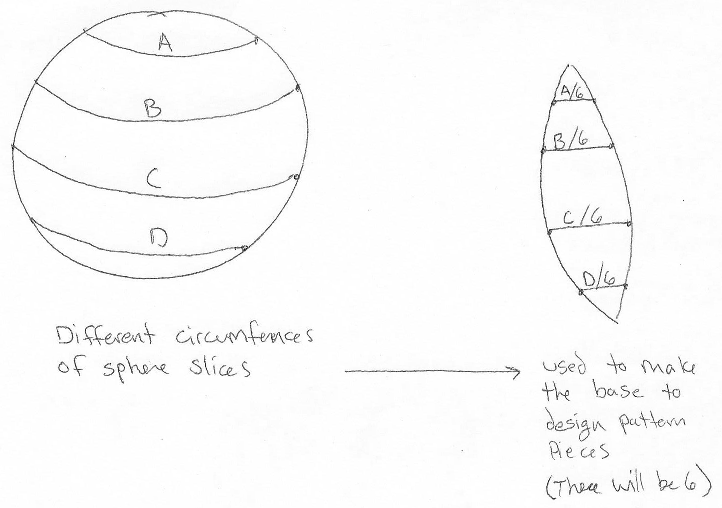 For context, I am designing patterns to sew differently sized leather bags. I want a large section of their bodies to mimic a spherical shape as that is pleasing to the eye. To draft my first prototype patterns it would be really helpful to be able to start with marking down mathematically determined points so that I have a good (hopefully spherical) base to start with and can then from there create a pattern that produces as close to the shape I want in the end product as possible without too many re-do’s at the sewing machine and less material waste.

Thank you for your time, and any help you’re able to give.

Jessica has a good idea for making a sphere out of six pieces, namely that the width of each piece at any given level should be 1/6 of the circumference of the sphere at that level. There’s a little more work needed (because the height at which each width will be found on the piece she makes has to be measured on the circumference), but we can handle that. In fact, we did so already 20 years ago, so I provided a link to that, and to another site I found:

What you are doing is essentially what is done to make a globe, using “gores”.

We have previously discussed this here, on the Ask Dr. Math site:

Making Hemispheres out of Paper

I have been thinking of making a blog post out of that, including pictures and specific examples to clarify exactly what to do. In fact, if you give me specific numbers for an example, we can work through that together.

Meanwhile, you can search for the terms “globe gores” to find more information and pictures. I didn’t find any sites with calculations, but here is one that gives specific directions for making a globe (with more than 6 gores):

The trouble is that nothing you do with flat surfaces can be exactly spherical; what you suggest, with only six gores, will look decidedly hexagonal from the top, unless the material stretches. As a result, it might be necessary to make a couple attempts in order to find what dimensions work best for your material. We have to decide whether the width should be based on the hexagon it will really be (chords), or the sphere you want it to be (arcs). You can make a first model of paper or fabric to see how it will work, but your first leather one may have different properties!

So send me what you want for a first try (radius, and height if it is not to be a complete sphere), and I’ll get back to you with some numbers and a drawing. In fact, you may be able to just scale up the drawing as needed to get any size, assuming you stick with six gores.

Real products generally require (just as Jessica expected) a mathematical first draft, modified to account for the realities of the material used. We’ll see that she is just as resourceful as other craftspeople I’ve known.

Making a paper hemisphere from gores

Before returning to that conversation, let’s look at the Ask Dr. Math page, which is from 1999:

What Matt called “triangles” are actually spherical triangles, with curved sides and curved interior; the reference to non-Euclidean geometry is apt. For a little about that, see Sum of Angles of a Triangle in Non-Euclidean Geometry.

Here is an image from the site I referred to above, showing a set of 12 gores to make a globe:

Matt’s “petals” would be the top halves of these gores, joined together at the north pole and making a big *.

The equator would be divided into 12 equal parts, with 30 degrees of longitude each (just as in the example above).

Here are the side cross-section Doctor Rick referred to, and the top view parallel to the equator (through a line of latitude): 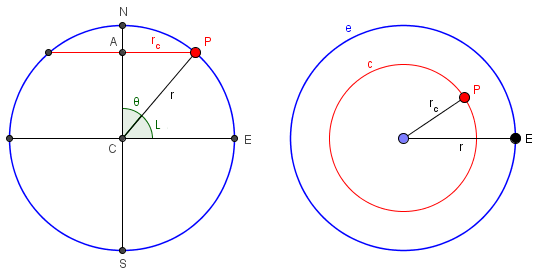 Here I have added one gore to the picture, showing how its width is calculated, and how it wraps around to the poles: 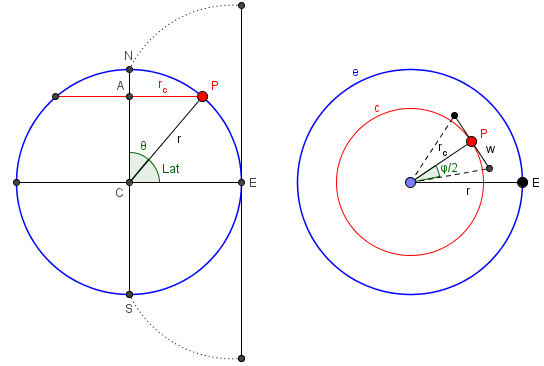 These gores are designed to lie outside the sphere, so that with a little wrinkling they could be pressed down onto the sphere; if the material were stretchable, you could make the sides, rather than the midline, of each gore lie on the sphere, and stretch the inside onto the sphere.

I’ll have a picture of a gore soon.

That gives us an exact formula for the shape of a gore; but since we have to stretch or wrinkle the gore to make an exact sphere, we have some “wiggle room”, so to speak. Jessica chose to use it.

Thank you for getting back to me. I am not too worried about the shape being perfectly exact, but I am using a soft split sheepskin that is only 1-2 mm thick.  For my test I used a felted knit fabric I had scraps of that, which are also nice and thick to test out seams and such for the same thickness at least. But you’re right, the leather will still behave a bit differently.

I went ahead and figured I’d just start with checking out the second link you sent. I followed the directions up to making the first gore and then took some measurements on it (multiplied by 8 and divided by 6) to make the start for a pattern piece on some graph paper. It turned out really well I think. I still need to figure out what I’m going to do for the top closure but that will come in time. The initial sphere size i assumed was with a 2 inch radius. 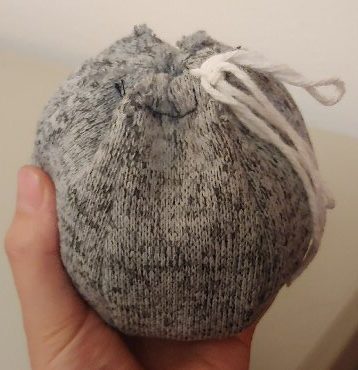 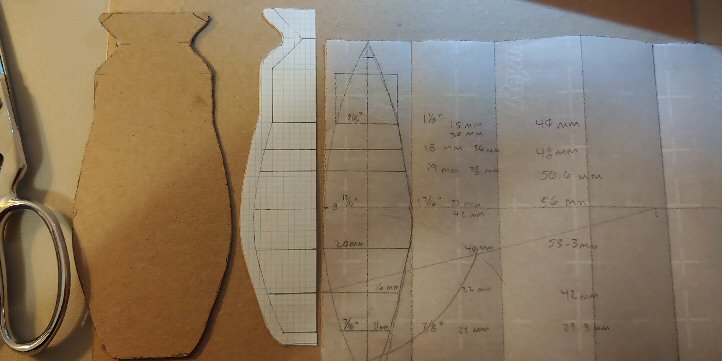 Now if I wanted to keep these exact measurements I just used, but in a larger scale, would I just multiply each one by the same amount or will that give me some distortions?

Thank you for all the help, I appreciate it.

This was done, not with the calculations Doctor Rick worked out, but with the method shown on the other page I linked to. Clearly it’s good enough for Jessica’s purposes; but for me, we still have to check out the method and see how accurate it is. Here is an image of the construction from that page, which uses circles rather than the sine curves of Doctor Rick’s formula:

Here is my own drawing of the technique:

The rectangle ABCD has width equal to the circumference (EF will be the equator), and height equal to half the circumference (points on AD and BC will be at the poles). We divide the equator into n equal parts, and mark G and H so as to line up with the midpoint of one of them. Then, just assuming that the curve we need for the gore is an arc of a circle, we locate the center, K, of that circle by a standard construction (where the perpendicular bisector IJ of EG intersects EF), and draw the circle. Then we repeat this n times. Note that in the article they say to use n = 8, but the drawing has n = 12; the method is valid for any n (to the extent that it is valid at all).

I wrote back with these final thoughts about this approximation:

That looks great, and confirms my sense that we wouldn’t need a perfect formula to get good results.

The site you used gives a rough approximation, using a circle, to what is really a sinusoid. You can do the same construction for a different number of gores just by dividing the large rectangle into 6 rather than 8 parts, and doing the same work after that.

It sounds like Jessica just stretched the horizontal measurements from the 8-gore model by 8/6, and the result was good enough; the general case of the construction (taking n = 6 rather than 8) would be slightly different, but really no better.

I also tried a slightly different method than Doctor Rick’s, making the width not that of the tangent line but of an arc of the sphere itself, for comparison (on the theory that stretching might give better results, and because that was Jessica’s own suggestion):

Doing my own calculations, and making the width of a gore as (according to your question) a fraction of the circumference of the sphere, I get the equation of the curve on each side of it as

where x is the distance from the center, R is the radius of the sphere, and N is the number of gores. By comparison, Doctor Rick’s formula gives the width of the gore as a tangent line (as you would get cutting it from stiff paper; his formula, translated into my terms, is

So now we have three formulas for the shape of a gore: Doctor Rick’s sinusoid, mine which is a little narrower but still a sinusoid, and the other source’s circular arc.

I have drawn both of those curves and the circle for N=6 (mine red, Rick’s blue, circle dotted) below. You can see that they are relatively close. If you were not satisfied with what you have already done, you might try using one of the other curves.

(I have also graphed Jessica’s stretched 8-gore version, and it is virtually indistinguishable from the dotted curve here.)

You are correct that you can just scale up all distances by the same factor to enlarge this, so making one pattern as you have done is reasonable.

Let me know if there is anything more I can help with. Applying math to real life makes it more interesting!

This is a good example of a case where the math can be done precisely, but it doesn’t matter in real life! On the other hand, a globe maker might care more about precision than a bag maker!

12 thoughts on “Making a Sphere from Flat Material”