Last week we looked at ways to derive the formulas for volume and surface area of a sphere, without using calculus. Let’s do the same this time for a pyramid. We’ll be seeing one method that comes very close to calculus (slicing and infinite series), and another that is fully geometrical (dissection, which we’ll do three different ways).

The first question we’ll look at comes from Terence, in 1998:

The formula for the volume of a pyramid is, in the most general form, $$V = \frac{1}{3}Bh$$ where B is the area of the base (regardless of its shape), and h is the height from the base to the apex. This also applies to cones.

This had already been answered (a little tersely, by Doctor Rob) 5 months before, so I answered initially with a reference to that page, as well as a link to Euclid’s Elements, which uses a very different method:

Neither of these references is good for a beginner, so I expected a request for help in understanding them, and I was not surprised by the reply:

So this time I expanded on both methods:

I demonstrated with a square-based pyramid, though the same reasoning applies to any base.

We can imagine that we’ve sliced a pyramid into N equal slices, and then added some material on the outside so each slice has vertical walls. Or maybe we’ve piled up layers of cake, and are going to cut off some material to make a smooth pyramid.

You can use similar triangles to explain the widths. Then each slab’s volume is its side squared, times its height:

This formula for a sum of squares is explained in many places; I’ll have a post about several ways to prove it soon. I gave one method (because that’s what Doctor Rob suggested), in case you have learned about mathematical induction:

Technically, we have used calculus here, in the form of a limit; but it’s a relatively natural kind of limit. The more steps we used, the less stuff there is to cut off, so we can just ignore it. The formula we ended up with is the correct one for a square pyramid, since the base area is \(B^2\).

Next, I expanded on Euclid’s method:

I redrew the figure from that page to make it clearer what the three equal-volume pyramids are:

Since the three pyramids have the same volume and together constitute the entire prism, each has volume 1/3 of that prism. And any other prism with the same base area and height will also have that same volume. (That is, changing the shape of the base, and moving the apex around in a plane parallel to the base, does not change the volume.)

Clearly he is not ready for the complexities of these proofs. I answered,

Sometimes we just can’t make something simpler. But experience should show you that what looks incredibly hard when you are young can become “obvious” once you have learned the prerequisites, so be patient. And we have a couple more versions of the dissection proof coming up, so things may get better …

Dissecting a cube into 3 congruent pyramids

A 2002 question provided a chance to restate the dissection method in a simpler case:

Doctor Rick replied, first referring to the answer above:

This approach does not directly prove anything about general pyramids, since it only applies to one special pyramid; but it is possible to then generalize. The main point here is just to show that the formula works in one easy case, so that it is easier to accept (without proof) that it might always work.

Here are three copies of this pyramid:

Here is how they go together: 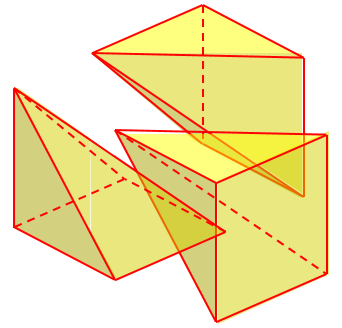 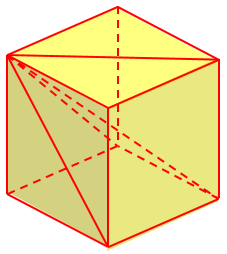 Dissecting a cube into 6 pyramids

A 2005 question provides a somewhat different proof that may be easier to see:

Doctor Greenie referred to the first page we looked at, and commented,

This, of course, refers to Euclid’s proof. Like Doctor Rick, he gave as an alternative a special case rather than a general proof:

Here is the cube divided: 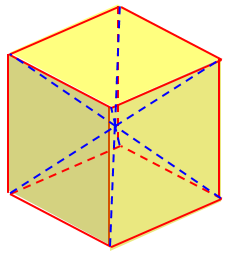 Again, this was not a proof, but was convincing.

Applying it to a non-cube

We’ll look at one last question (2016), in which we are not deriving a formula, but applying our thinking directly to a specific case:

What Irene had found was equivalent to that last answer. Doctor Greenie answered, modifying it: 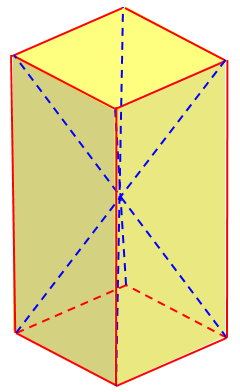 The reasoning here is much like Euclid’s way of showing his three pyramids have the same volume. Each has been doubled, by doubling one dimension.

2 thoughts on “Volume of a Pyramid – Without Calculus”